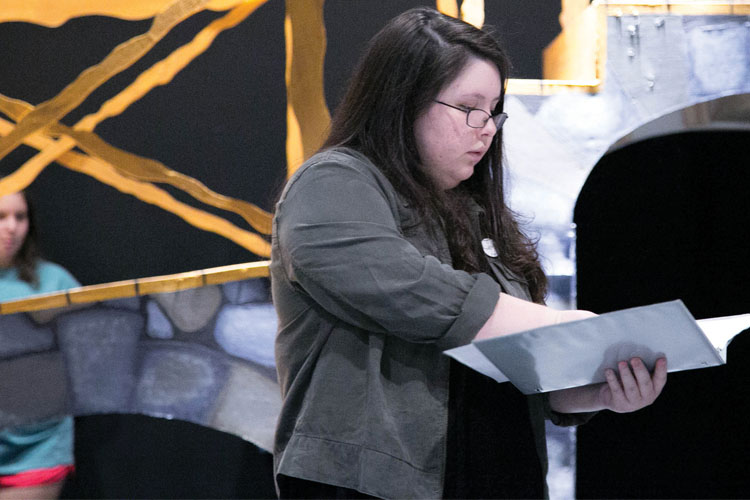 PICTURED ABOVE: Senior Grace Lowry runs through script with actors during dress rehearsal of “Somewhere South of Galway.” Photo by Hunter Folsom

It’s official, for the first time in Hockaday’s history, a senior has written and directed the school’s annual fall play. Senior Grace Lowry has been estab- lishing a theatre legacy for herself since her sophomore year at Hockaday. Prior to her current and third direction project for Hockaday, “Somewhere South of Galway,” Lowry wrote and directed “Flooded,” a one-act show in the spring of 2016, and “Starving Artists,” a full-length show last spring.

“It was definitely an intimidating prospect, but at the same time my shows have gotten bigger each year. It feels like the perfect way to end my writing and directing time at Hockaday,” Lowry said.

But it has been a long process. Lowry had no funding from Hockaday for “Flooded,” no place to show it, and only one rehearsal every Y Period on Day 6. Her second play, “Starving Artists,” got more support and had a small budget, the Black Box to perform in and the involvement of Hockaday’s Tech Crew.

Now, with “Somewhere South of Galway” as the official Hockaday fall play, Lowry is getting full support. She has a larger budget for marketing and props, the costume crew, the tech crew, the Black Box and many actors and actresses at her disposal.

“Somewhere South of Galway” is a musical set in 1930s Ireland that centers around three sisters whose lives are turned upside down when English sailors arrive in their village. Galway, a rural town on the west coast of Ireland, has a seaport for fishing and trade and its inhabitants are wary of visitors. With a mix of upbeat and tragic moments, the three sisters deal with both the death of their mother and their love lives at the same time.

Senior Paloma Renteria, who first worked with Lowry in “Flooded”, plays Darcy, the owner of the local pub.

“I have watched Grace write this for the past year, so I feel really honored to bring this to life,” Renteria said.

One problem Lowry faces when directing is trying to be an authoritarian with her peers. In “Flooded”, she struggled even more as a sophomore when she directed seniors. In order to gain and maintain respect, Lowry balances fun with serious.

“It’s a difficult balance to make. I’ve tried certain things and failed at those things, but I’m at a place now where I get it,” Lowry said.

Lowry has matured as a writer and director. Upper School Drama Teacher and producer of “Somewhere South of Galway,” Emily Gray, has noticed an evolution in Grace’s directorial skills.

“She has really grown in terms of understanding the process of making theater, and that has been really lovely to watch,” Gray said.

Instead of being stressed when a member of the costume crew faces last minute problems, Lowry now better understands how the production of a play works and calmly discusses the problems with the crew members. This change is largely in part to Gray’s mentoring.

“You have to learn through seeing first, and then you learn through doing, so I watched Mrs. Gray direct,” Lowry said. “I saw what she did and how she interacted with actors, and I think that served as a basis for how I do my role.”

Even though Gray is the most inspirational person throughout Lowry’s directing career, Lowry also has writing influences. Lowry’s inspirations include actor and director Laurence Olivier, whose work on “Wuthering Heights” earned him an Oscar nomination for Best Actor and playwright Noël Coward, who wrote “Hay Fever”, because of their work with characters.

Gray’s favorite quality of Lowry is her writing; she often forgets she is reading a student’s work. Although Gray initially liked the premise of “Flooded,” it was Lowry’s clear, witty and heartfelt dialogue that blew her away.

“Her writing is remarkable,” Gray said.

Gray also loves Lowry’s confidence when directing. The actors respond to her directions without argument or talking back. When disagreements occur, the actors and Lowry discuss the problem, but Lowry never loses control of the situation.

Sophomore Helena Magee, who worked with Lowry on “Starving Artists”, appreciates Lowry’s cues for lighting. Magee designed and strung the lighting in the Black Box for “Somewhere South of Galway”. She also programmed the cues for the lights and will control them during the show.

Lowry provided Magee with many different lighting cues throughout the play and worked with Magee to accomplish her vision.

“She is all-around a very good director,” Magee said.

Lowry currently independently studies playwriting, a course titled Playwriting and Dramatic Studies, allowing her time to work every other day on creating new plays. She is currently in the process of editing a new play and has started writing another one as well. Along with writing plays during the class, Lowry also reads and analyzes about 12 plays throughout the year.

Lowry does not plan to stop playwriting after she graduates from Hockaday. She wants to study playwriting or theater management and is currently applying to conservatories, or three-year programs that have vocation-based curricula, in both the United States and the United Kingdom.

“Plays give me a great place to put all of my interests together and bring them together in the place that I love, which is theater,” Lowry said.

“Somewhere South of Galway” was performed in front of the freshman class yesterday and will be shown to the general public this evening at 7 and tomorrow afternoon at 2 in the Black Box Theater. Tickets come on a first come, first serve basis before each show at the Black Box and can be paid with cash or credit, but the theater fills up quickly. To read a review of the play, visit hockadayfourcast.com.