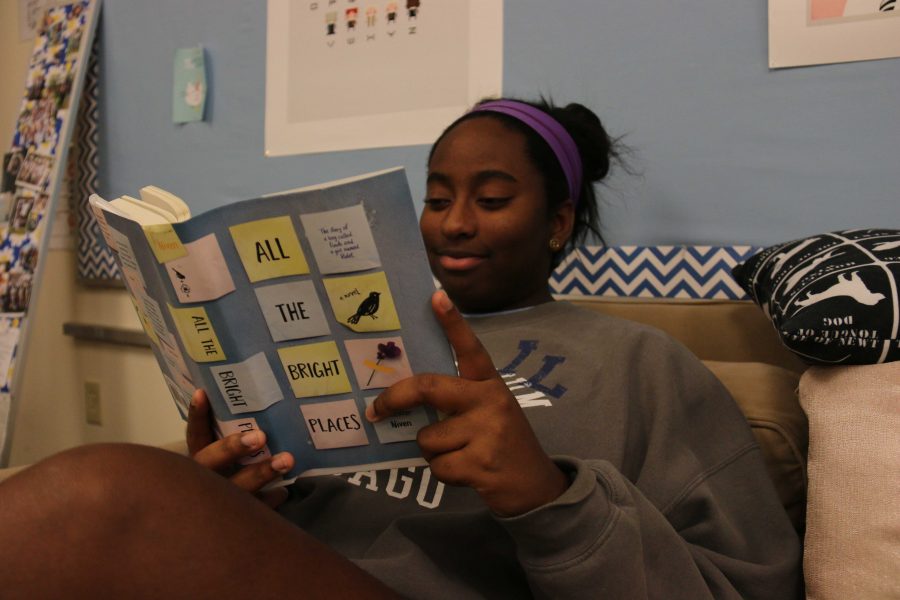 PICTURED ABOVE: Senior Lauren Puplampu reads “All The Bright Places” by Jennifer Niven as research for her independent study. This fictional book focuses on two teenagers living in Indiana, mental illness and suicidal thoughts. Photo by Maria Harrison.

If students have a strong interest in a eld that is not offered in their curriculum, Hockaday offers an alternative path: a student-directed independent study program where the student has the ability to choose, focus on and write their own curriculum. Although many students are participating in independent studies, The Fourcast is taking a closer look at the independent studies of three seniors: Lauren Puplampu, Neha Dronamraju and Grace Olson.

“I wanted to know if the media was portraying mental health correctly and how this was affecting my friends and those in my community,”

Puplampu said. “My friends who had mental illnesses were telling me that this isn’t being portrayed right, and it’s making their mental illness worse.”

For her research, Puplampu is reading “The Rest of Us Live Here,” which focuses on depression, anxiety and eating disorders, and “All The Bright Places,” which deals with depression. Later, Puplampu will also choose a movie and a television show to analyze. By asking around, she has found several students in the Hockaday community that she will interview to further educate herself on the topic.

At the end of her study, Puplampu hopes to bring awareness and start thoughtful conversations about this topic. She believes that mental illness isn’t something that needs to be kept in the dark.

“I want to break this stereotype that the depressed kid wears the black hoodie and is leaning down,” Puplampu said. “I want to tell people that it doesn’t always look like that and it has different signs.”

Senior Neha Dronamraju decided to look at policy reform for undocumented students and students who speak English as a second language in DISD along with her independent study advisor, Director of Service Learning Laura Day.

“We’re going into DISD meetings to find which policies are failing the students,” Dronamraju said. “I want to provide resources to high schools and inform teachers of these circumstances in their schools.”

Within the DISD system, Dronamraju’s goal is to hone in on two problems: the language gap existing between English speakers and non-English speakers inside the classroom, and the college process for undocumented students.

“[Non-English speakers] are often thrown into English classes then they are playing catchup their entire life,” Dronamraju said. “The current ESL programs are only catered to Spanish speakers, but the education system now is changing with the times.”

Dronamraju attends one to two DISD meetings every month where she has noticed that there is a lack of students’ perspectives regarding making the policies. Thus, listening to students from the Leadership ISD Student Voices program, Dronamraju is able to bring that perspective to the policymakers.

“At the end of the year, I want to have a system in place for ESL students that make integration in DISD easier,” Dronamraju said.

After she wrote on the AP Biology classroom’s board last year in, senior Grace Olson’s lab group complimented her handwriting, which sparked a question within Olson: what is the implicit bias associated with handwriting? Thus, Olson collaborated with Science Teacher Katie Croft to design an independent study looking at the correlation between implicit bias and handwriting.

“We don’t always realize that we have bias against different handwriting styles and how that affects how we view others,” Olson said.

Since the beginning of the school year, Olson has done research about implicit bias, handwriting analysis, neuroscience and how humans interpret information. Later in the year, Olson plans to design and conduct experiments using Hockaday students’ handwriting to test whether there is a response with bias to handwriting.

“I’m hoping to understand how we view things in the most subtle ways,” Olson said.