Teachers Get Schooled in Self Defense 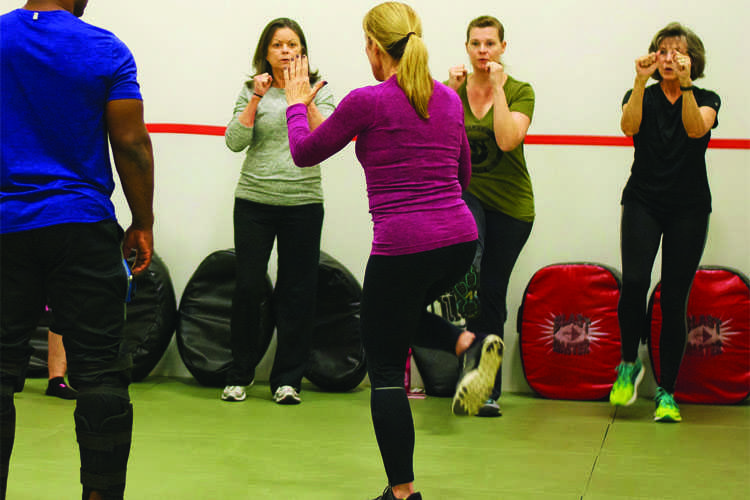 With clenched fists and eyes locked on her target, she geared up to throw a punch. Her heart pounded and her adrenaline levels spiked as she swung at her opponent with full force. As the sound of successive punches echoed around the room, high pitched screams of “get away from me” and “back off” pierced the air.

On an early October afternoon, Alejandra Suarez, Upper School Spanish teacher and Form II Dean, along with nine other Upper School faculty and staff members, attended their first self defense course offered by Self Defense Instructor Meg Hinkley in the self defense training room in Penson Gym.

After weeks of conversations and planning between Suarez, Hinkley and Rebecca Calhoun, health curriculum teacher and Form IV Dean, Upper School faculty and staff were invited to participate in the six-week self defense course.

“I received emails right away with people who were interested. It was awesome to see that people really wanted to participate in this,” Suarez said.

In the end, ten people signed up for the course and they met on Oct. 4 for an introductory class to kick it off.

Hinkley intends to model the course after the senior self defense curriculum by exposing faculty to the same physical content, verbal drills, physical drills and simulated attacks. However, she plans to modify the portions of the senior course that focus on precautions to take when entering college.

“Women of all ages can be targets and so by learning some basic prevention skills, like how we carry ourselves and the energy we are projecting, we can make ourselves a less likely target,” Hinkley said.

Hinkley works to eradicate the misconception that only young women can be victims of sexual assault. She wishes to prepare and inform women of all ages to provide them with the tools to protect themselves.

“Younger people have higher risk of being attacked for sexual assault due to vulnerability but sexual assaults happen to women in their 90s,” Hinkley said.

Despite inviting all faculty members, Hinkley hopes to offer a class for men in addition to the current all female class. She is open to teaching a co-ed class but she would focus on different things for each gender.

Hinkley explained to her students that attackers who target a female for sexual assault typically tend to grab to contain them and transport them somewhere isolated. Males, on the other hand, are more likely to suffer a punch or a hit from their attacker.

“Sometimes males are in situations where someone is throwing punches at them but they don’t want to do something to that person that would possibly kill them,” Hinkley said. “Typically when women are being attacked it’s life threatening and you need to do something serious to fight back.”

In addition to learning some physical skills, Calhoun stressed the importance of just simply learning to be more aware. She thinks that she and the other faculty members will benefit from hearing reminders about things like remembering to keep one hand free, to put your phone down and to check your surroundings when leaving the mall.

“It’s raising awareness and having a plan. I think those two things are invaluable for everyone,” Calhoun said.

Before this class, neither Calhoun or Suarez had taken an extensive self defense course. However, Suarez believes that it is important for the faculty to educate themselves to be able to give advice and answer students’ questions.

“The more prepared we are, the more we will be able to help ourselves and help others,” Suarez said. “It is crucial for us, as educators, to share a common point with our students and to understand what they go through.”

Calhoun was grateful for the self defense techniques that she recently learned when she spotted a white van idling in the middle of her street before starting her 6 a.m. pre-workout jog. Although she acknowledged that there may have been no threat, she decided to change her warm up routine to ensure her safety.

“I think that we all live in a world where we need to have that extra awareness and extra knowledge of how to protect ourselves, get out of situations, or prevent situations from going further,” Calhoun said.

Hinkley believes that learning self defense techniques and reminders should become a greater priority for those who haven’t taken a class. Even though people tend to get caught up in their busy lives, she sees self defense as an essential part of caring for our selves and our health in general.

“[Taking a self defense class] is more something that people do when something happens to someone close to them or they have a scare themselves,” Hinkley said. “Just knowing what to do and having that awareness really radically changes things and makes you much less likely to be a target.”

Suarez is eager to continue to learn new things in this course and hopes to someday teach a self defense class herself.

“In my perspective, if I don’t teach it I won’t learn it,” Suarez said. “I would like to be able to learn by teaching, especially in today’s world where we are so busy that we tend to not stop and think about a lot of things”

Suarez sees this course as an essential way to learn important self defense techniques, and she also sees it as a way to strengthen the bonds within the Hockaday community.

“I am beyond excited that the faculty is involved in [a self defense class] because it’s another setting to build community and another way for adults to connect with each other,” Suarez said.

Calhoun hopes to see this wave of faculty interest in self defense continue to grow.

“I hope it’s something that we could offer routinely so all faculty has the opportunity to participate,” Calhoun said.

And it sounds that the initial classes have already generated a buzz among the entire faculty.

“It is only our second week and interest has spread to other divisions of the school,” Suarez said.