Don’t Burn a Book By Its Cover 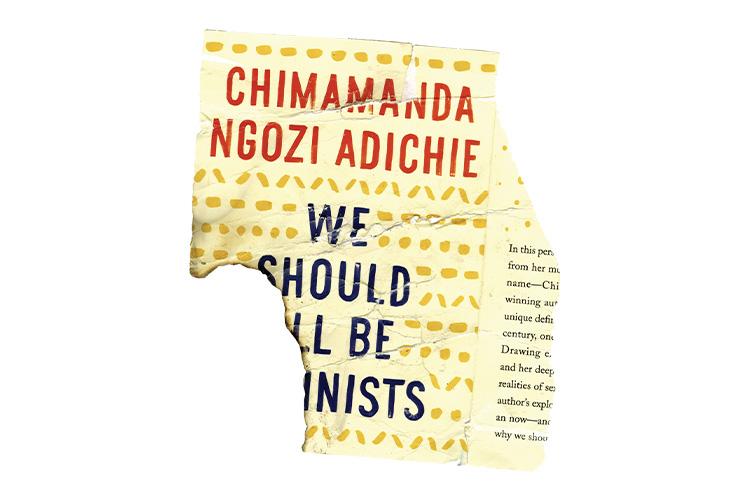 The cover of Chimamanda Adichie’s “We Should All Be Feminists” is simple. It consists of three colors and a standard font that spells out both the author’s name and the title of the text. There are no burning bras or indignant protesters; the word “feminist” is the only “controversial” thing displayed. Adichie’s essay has moved me to tears twice: once when I read the text for the first time, and again when its torn and burnt cover was placed in my hands.

After the first high school football game in late August, I invited my grade back to my house to celebrate the win. I took every precaution in preparing my house for a band of excited teenagers. I was naive enough, however, to leave my copy of “We Should All Be Feminists” out on my kitchen counter in plain sight. Not long after everyone had arrived, I received reports that something was awry outside, and it involved a circle of boys, a lighter and my mangled book cover.

It has been about two months since my book was sacrificed to appease the ignorance of these boys, but my initial anger hasn’t subsided. I have had ample time to think about the full meaning of this barbaric event.

What those boys did was, at the most basic level, destruction of my property. They entered my house, took something of mine out of my kitchen and set it on fire. Even if their book of choice had been my copy of Adolf Hitler’s “Mein Kampf,” burning that detestable manifesto still would have been deeply wrong.

And, while we’re talking about Hitler, before that night in late August, I believed that only fascist dictators burned books. I have always been taught that books are sacred, invaluable and profoundly respected by all. I am still startled by the boys’ ability to destroy something so vital to humanity, even if it was just the cover.

But, I don’t think that these boys are avid book burners, which brings me to my next thought: why this book?

The fiery demise of Adichie’s cover is a classic example of the misunderstanding of the word “feminism.”

Why is such a simple word so divisive?

Resistance to feminism, a word that truly calls for gender equality, typically stems from the fact that its root is “feminine.” Because of this, people seem to think that feminists want women to be more powerful and have more rights than men. While this is a common misconception, it is utterly unacceptable. When I don’t understand a word or find its meaning upsetting, I, like most people I know, simply click on my browser and type that word into the search bar. If the opponents of feminism could take a few seconds to do that, I think, however optimistic this may be, the resistance would dwindle.

In the case of my charred cover, the boys held the answer in their hands. Adichie’s essay clearly and concisely explains the true meaning of feminism and details why it is necessary. And, being the clever writer she is, Adichie actually appeals to men in “We Should All Be Feminists.” She repeatedly explains the essential cornerstone that feminism is beneficial for all genders. If the boys in my backyard had opened the cover instead of tearing it off, maybe they would have seen that by opposing feminism, they are actually opposing themselves.

I am not assuming, however, that out of this large group of educated boys, there was not one who knew the true meaning of feminism. There are those who know what the movement stands for, and they still fight against gender equality.

I think I entered this world a feminist, so I will never understand this illogical and deep-seated prejudice, but from my experience, I believe that the stubborn opposition to gender equality stems from fear.

It is human nature to want to be in control. Likewise, it is natural to fear losing that control. But this only applies to one’s own life. We fear losing control of our time, our work, our social lives and so on, and that is okay. Some, however, fear losing their age-old, systematic control over an entire gender, and that is definitely not okay.

Men have been ruling society since, quite literally, the dawn of time, but just because that’s the tradition doesn’t mean it has to stay. Humans rarely get anything right on the first try anyway.

We eventually figured out that the Earth was round and that the Americas indeed existed, so maybe in this millennium we will finally realize that society works better when women are in charge too. This will only be accomplished when we decide to open our minds, and our books.

For this entire discussion, I have been referring to the group who burned my book as a group of males, but I know that it is entirely possible that there could have been a few women in the mix. To my fellow women, I would say that I hold no disdain in my heart for you.

The patriarchal society that we live in teaches women that they must please men at all costs and that it is wrong to disagree with a man or to stand up to him. The woman’s ideal is not to have a lucrative and fulfilling career, but to attract men in order to reproduce. There is no room in this plan for opposing the men in our lives, even if they are actively repressing our rights as human beings.

Even though I can write this manifesto from the safety of my computer, I too fell into this trap. Moments after I saw the remains of my cover, I went outside to confront someone that I knew was at least partially responsible. I started out the confrontation being assertive and strong, but as I began to feel more and more eyes on me, I shrunk. Feeling that if I angered this one boy, I might upset all of his friends, so I conceded to him. I was initially ashamed of my weakness, but I know that I cannot blame myself or any other girl who felt silenced by male pressure, because the desire to appease men is instilled within us.

Why they decided to return the scorched cover to one of my friends I will never know. My best theory is that instead of keeping their handiwork as some sort of trophy of male power, they wanted the girls to see what they had done and show us that they wanted to silence our pleas for equal treatment.

A few weeks after my first book was destroyed, one of my best friends bought me a new copy of “We Should All Be Feminists.” She reminded me that prejudice, ignorance and hate will never be stronger than the collective power of women.

I have come to see my unique cover not as a symbol of oppression but as a source of inspiration to keep fighting for the progress we desperately need. I have pinned the cover to the top of my bulletin board in my room to remind myself of the work we still have to do.

My fresh, unscathed copy of Adichie’s text is easier to read, but the torn and burnt cover hanging over my bed is the best reminder of why I am a feminist, and why we should all be feminists.