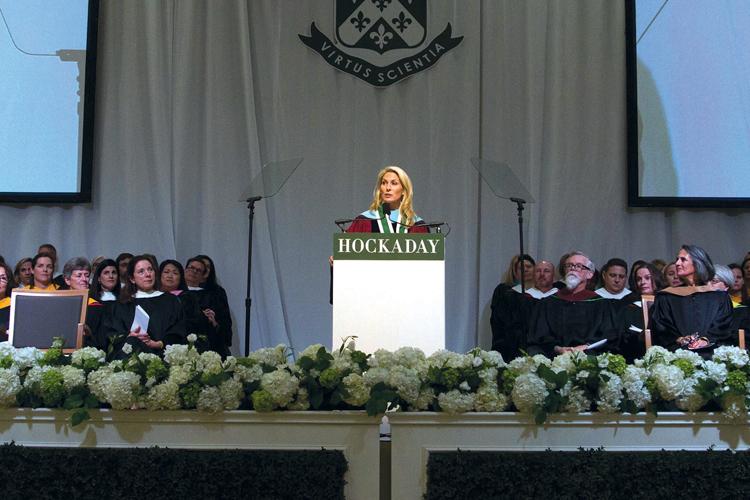 PICTURED ABOVE: Dr. Karen Warren Coleman speaks at the installation on Oct. 15 as she outlines her plan for Hockaday’s future. Photo by Lauren Puplampu.

Despite Coleman being the 13th head of school and fourth Eugene McDermott Head of School, installations for new heads have only been in existence since Liza Lee was named Headmistress in 1990. Director of Development and External Affairs Debby Spradley has overseen the planning of these ceremonies from their inception. She said that although each installation marks a new leader for the school, their purpose remains the same.

“Our main objective is to create a community event where everyone could participate and it would be a starting point for the next chapter in Hockaday’s history,” Spradley said.

Upper School Head Terry Murray echoed this sentiment by noting the timing of the event on a weekend, when students wouldn’t normally be at school.

“The idea of doing it on a Sunday is having a community day which we can all celebrate. I liked having the kids there, even though it was a challenge logistically, because that’s who we are. We are nothing without our students and our teachers,” Murray said.

The event promoted the spirit of community with students, faculty and staff, parents, both past and present trustees, alumnae, all heads of Dallas area schools and universities receiving invites. Many heads from universities across the nation were also invited. Along with these guests, Coleman’s extended family, past colleagues, and many past classmates and peers were asked to join the occasion. The Development and External Affairs department dealt with the logistical execution of the installation, which included providing, hotel bookings, and transportation for many of the out of town guests. Beyond the organizational work, Spradley worked with the leadership team, Board of Trustees, and Coleman herself on the creative vision for the ceremony.

Although the installation was created to honor and initiate the new Head of School, Coleman felt that the event served a much larger purpose to unite the school rather than just being a ceremony, and therefore wanted to be a part of the planning process. With the process being so mission-driven and every de- tail having a unique importance, she felt the pressure to do her due diligence to the School’s storied history.

“I can’t imagine being at the White House and planning an inauguration, but that’s how it felt. If you can think of it this way, it was like if Miss Ela Hockaday was here, and we were carrying forward 104 years of history,” Coleman said.

Several key details of the installation came from Coleman and the leadership team’s dedication to this mission of paying respect to Hockaday’s past and present. To start the ceremony, the senior class processed hand in hand with first graders to show a sense of the current community. Murray said that because younger kids can get restless, this was a challenge logistically, but it ended up having a great outcome.

“I was most worried about the younger kids with the older kids, because that’s a lot to ask from them, and when I saw it, it was such a cool visual and now the Lower School girls talk about it nonstop,” Murray said.

Along with envisioning the initial pro- cession, the team confirmed current Chair of the Board of Trustees Barbara Rosenblatt, and Immediate Past Chair David Haemisegger would give opening remarks and introductions respectively. They then followed Coleman’s direction in her selection of keynote speakers that would uphold Hockaday’s values while also giving insight into Coleman’s past. She reached out to her former colleagues from the University of Chicago, now Colby College President Dr. David Greene and Dean of Rockefeller Memorial Chapel at the University of Chicago, Reverend Elizabeth Davenport.

“I was very intentional about asking Presi- dent Greene and Reverend Davenport because they knew me during a period of my leadership that was really important to me [at the University of Chicago]. I knew that they shared my commitment to student life and development and had a profound commitment to girls’ education,” Coleman said.

Davenport and Greene’s presence at the installation served to acknowledge Coleman’s past as a gateway to her new role.

“You are here among us today as one who’s chosen your own destiny as you have voiced it down the years and it has brought you to this moment to this bold and discerning yes to a new chapter,” Davenport said.

When inviting Greene, Coleman and the team were presently surprised to find Hockaday alumna, Gretchen O’Brien ‘14 listed as a senior at Colby College. They felt that O’Brien would be a strong representative of the alumnae community and could provide a connection between the school and the speech from Greene. They invited her to come to the ceremony and introduce Greene as the keynote speaker.

O’Brien was nervous and unsure about flying out and taking on such a big role at first, but after a few days of thinking it over, she realized that it was an amazing opportunity to honor a momentous occasion, return to Hockaday and also bring a few Colby friends along, since it aligned with her fall break.

“I loved being able to think about my past at Hockaday and my present at Colby, and I wanted to share all of that and properly introduce President Greene,” O’Brien said.

Coleman also really appreciated O’Brien’s speech because it gave her a chance to listen to members from the community she was about to join.

“[Her speech] was amazing as someone who understands Hockaday like she does, and I will continue to want to know more [about the School] through all of the girls that have been at Hockaday,” Coleman said.

In addition to the guest speeches, Coleman was touched by the speeches from current Hockaday students Evelyn Yau ‘26, Sarah Roberts ‘22 and Samantha Watson ‘18.

“Each of them not only represented Hockaday well, but had their own tidbits of advice for me, and it was also a nice welcome from Lower, Middle, and Upper School,” Coleman said.

Upper School Student Council President Watson was grateful for the opportunity and enjoyed her role in the installation as well.

“It was really cool to be able to speak on behalf to my classmates and introduce her to the Upper School. We each represented differ- ent sectors of Hockaday life and how we hope she will fit in,” Watson said.

The speech that involved the most work from Coleman was, of course, her own. In her first address as the official head, Coleman wanted to ensure she reconciled the history of the School with the plans for the future, specifically with the Four Cornerstones.

“I wanted to bring the Cornerstones to life and make them fresh and relevant because when they were written it was a different time,” Coleman said.

In her speech, she recalled Googling the meaning of cornerstones to find that they actually mean foundation stones, and that her vision for Hockaday’s future is contingent on building off of them.

“I hope we will continue to embody the four historic values that anchor our community even as we shape Hockaday’s future,” Coleman said during her speech. “As head of Hockaday I will challenge us all to continuously evaluate whether we are living up to this commitment and what ways we should grow as a School.”

To speak in the midst of the entire School as well as her family and other people from every stage of her life gave her a sense of belonging and closure with this new role.

“This is a place that deeply values connections and authentic relationships. Having so many members from my life come together was an affirmation of the community I’m joining… and a really important part of my own feeling [that] I’ve settled into my new role and new home here in Dallas,” Coleman said.

In planning the event, Coleman and the leadership team understood that the installation was not a ceremonial gesture, but rather an important marker in the timeline of the school. Although Coleman had been visiting the School for eight months since her appointment last November, the installation still really resonated with her Hockaday journey so far.

“In some ways it changed nothing and in other ways it changed everything. It’s not as if [my] work didn’t start until after [the installation] happened. It was a moment in time to articulate my values and my vision,” Coleman said.

For her, the installation was a time for reflection on the past and remarks about the future all through the spirit of community.

Coleman said, “It [was] truly not about me at all, it [was] about Hockaday. In many ways, it encapsulated the gravity, weight, and incredible responsibility I have coming in to inherit a place of so much history.”