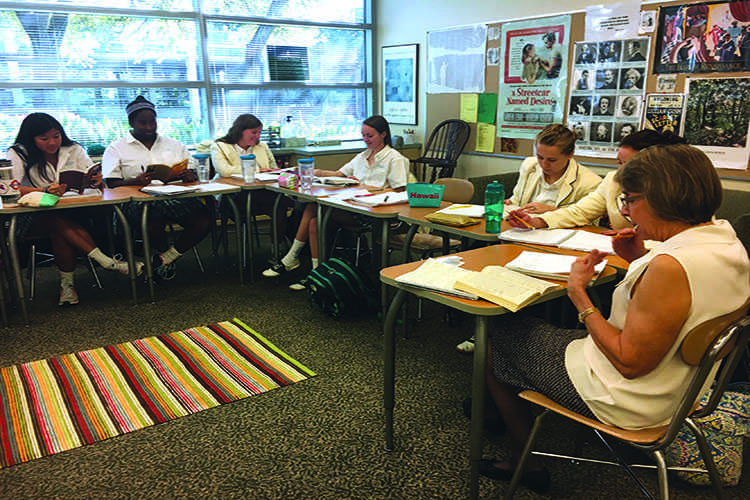 This year, equipped with empathy and knowledge, the Contemporary American Literature Senior Semester Seminar will breathe life into what they have learned in class and take on a project in association with Heart House, a Dallas nonprofit organization dedicated to create a safe environment for refugee and underprivileged children.

Upper School English Department Chair Janet Bilhartz designed the Contemporary American Literature course and has taught the seminar for five non-consecutive years. She created the course to offer seniors a chance to read contemporary American literature, especially American writing in the 21st century. These stories touch upon current subjects and offer a more diverse scope of perspectives than the works of American literature studied in previous English classes.

Senior Tiffany Bai, a student in the Contemporary American Literature Senior Semes- ter Seminar, loves the materials she is reading in the course.

“I enjoy reading about cultural backgrounds and the integration of different cultures in the nation because it reminds me of my own identities,” Bai said.

For the same reason, Bilhartz offered the students the project that they are about to undertake. On Nov. 6, Hockaday seniors taking the Contemporary American Literature class will take a field trip to Heart House where they will learn the stories of refugee children from third to fifth grade.

Heart House Dallas, founded by Suzanne Kiefer and Anna Land, is nestled in the Vickery Meadow community that many refugees call home. Every senior who takes the Contemporary American Literature Senior Semester Seminar will interview a refugee at Heart House’s site on Park Lane and learn their life story. Afterwards, the seniors will return to the classroom and craft a narrative based on the life of the child they met.

Bilhartz believes that allowing the students to fully experience and see what they’re reading is very important for her class.

“For me, it’s about making literature real,” Bilhartz said. “Literature is about life.”

Each day, Heart House serves roughly 130 students who speak 15 different languages. According to Alissa Windle, Manager of Program and Operations at Heart House, the nonprofit strives to transition refugee students from an environment of chaos to calm and also to offer the children a safe oasis to integrate into American culture. Many of the students come from war-torn countries.

This project is coordinated by Janet Bilhartz and Director of Service Learning Laura Day. Hockaday first reached out to Heart House regarding the organization’s promotion of Social and Emotional Learning, a process focusing on emotion within education, which is similar to Hockaday’s efforts on promoting mindfulness. When Day first thought of this project, she discussed it with the English Department. Bilhartz, who saw that the project fits nicely with the curriculum of the Contemporary Literature Class, took the opportunity.

As the director of service learning, Day tries to make the classroom experiences relevant to the community.

“The number one thing I’m really interested in these days is how do you connect what you’re learning in the class to social impact,” Day said.

Similarly, Windle believes that what students learn in the classroom can only come alive with human connections in the real world.

“The story of a refugee is a lot different. It’s not one that a lot of people get to interact with other than on the news. Being able to put a face to these different things you’re hearing about changes a lot,” Windle said.

Bilhartz said that the students’ connections with the refugee children will inspire a better understanding of literature. She believes that this project, like reading literature, allows students to gain empathy into the lives of others.

Senior and Contemporary American Literature student Sarah Fitzpatrick is nervous but excited to talk to the refugee children and hear their stories.

“I know for a fact that I’m going to come out of it with a new sense of something,” Fitz- patrick said. “I think it will be really eye opening, and I’m really excited.”

Academically, Bilhartz thinks that the project will be a very good chance for the students to exercise their narrative writing skills.

But this project, aside from bettering the students’ understanding of life, is also about sharing these stories with the community.

“I think that for us to have this opportunity to go to Heart House is for us to have the opportunity to, not live the life, but to hear it first hand from the people who lived it, and to spread it to others, to become carriers of those contemporary American stories, to carry those to other readers, specifically Hockaday,” Bilhartz said.

Windle sees this collaboration as a chance for the refugee children to be able to tell their own stories, something they can’t do on their own because of language barriers.

“Getting to give these kids a voice for the first time is going to be a really good impact for them,” Windle said.

Day hopes that the school can offer spaces like the Hockaday Ann Bower ‘67 Gallery to potentially display the narratives alongside pictures of the refugees. Heart House will also use the student works for their campaign to raise awareness.

“A lot of our kids have these really amazing stories that got them to America or just their struggle through moving through America, and we haven’t had a way to really capture those in the past,” Windle said. “We’re excited for Hockaday students to come learn about our students and then be able to write their stories for the first time.