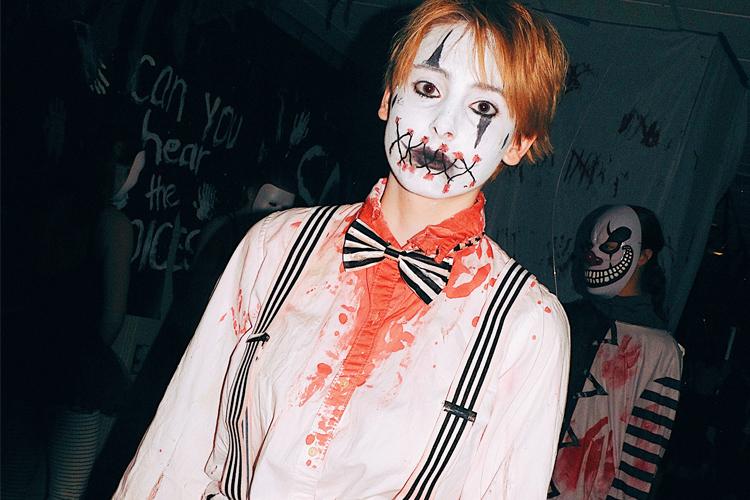 On Oct. 27, seniors continued the tradition of decorating the hallways for Halloween and scaring the underclassmen. This year, they transformed the Upper School into a carnival-themed haunted house. From clowns to mimes, each student dressed up as creepy characters decked out in fake blood, ripped dresses, masks and even realistic special effects makeup. The Fourcast walks you through each hallway and gives you the fast facts on all the spooks and scares that went down in each one. Hold on tight, it’s pretty scary.
Freshman Hallway
Theme: Freakshow

Fun Fact: Seniors Claire Rattan and Lizzie Benedict joined together to be one of the two-headed people, and they got creative. For their costume, they squeeze into an extra large costume and both wore freaky masks.
Sophomore Hallway
Theme: Mimes

Fun Fact: Talk about creepy. The sophomore hallway was completely silent and clear pieces of string dangled from the ceiling so they brushed against people walking through.
Junior Hallway
Theme: Circus Gone Wrong

Fun Fact: It was an interactive hallway with games like Cornhole and Go Fishing that underclassmen could play as they walked through the hall.
Senior Hallway
Theme: Clowns

Fun Fact: Senior hallway leader Hannah Sipes was behind many of the special effects makeup seen on seniors. The makeup is so detailed and gory that you’ll think it’s real. She runs an Instagram account with over 4,000 followers called @sfx.by.h, which features her creepy creations, like bloody cuts and alien makeup.