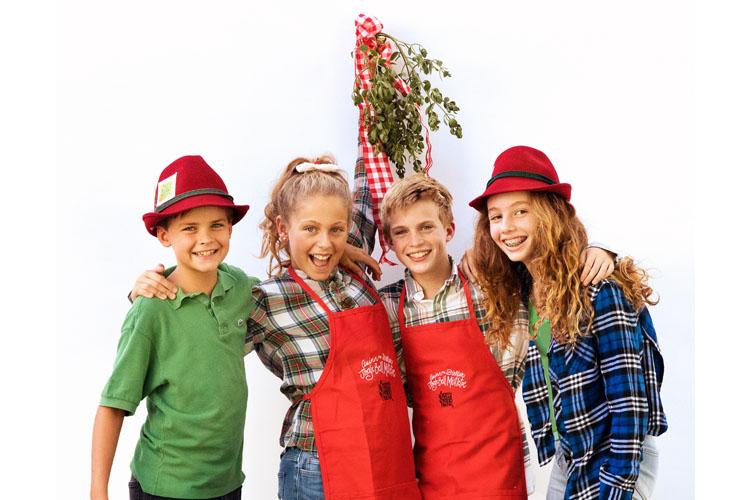 Bundles of mistletoe in varying sizes adorned with bells and bows of ribbon cover the Wrubel family’s garage. Sixth grader Stella Wrubel works with her family as they shape and decorate the mistletoe for retail. Going out to one of their stands on Dec.15 in Highland Park Village for the sixth year, Wrubel and her family hope to reach their $60,000 goal to donate to the North Texas Food Bank.

Determined to make an impact, Wrubel founded Jingle Bell Mistletoe when she was in the first grade. Wrubel realized the devastating damage of Hurricane Sandy and felt inclined to help in any way she could.

“I wanted to make a difference and help those affected by Hurricane Sandy,” Wrubel said. “I sent my proceeds to The Red Cross of New York the first year of Jingle Bell Mistletoe.”

However, Wrubel did not take on this project alone. By recruiting three of her close friends and her family’s help, Wrubel has had success in her business by splitting up the important tasks.

“I may have been the founder but [my friends and family] have really kept it going,” Wrubel said. “We are all really committed, and I couldn’t still be doing this if it wasn’t for their help and support.”

One of Wrubel’s friends and a sixth grader at the Greenhill School, Quinn Graves, has taken on the roles of vice president and creative director, designing artwork for their website, flyers and tags. Graves appreciates being a part of the team due to his strong belief in the project’s purpose.

“I believe this work is important because of all the people that it is helping to feed,” Graves said.

“It has been a nice thing for our family because it has made the Christmas focus more about sharing and doing something good, taking the emphasis off of the gifts,” Jennie Reeves said.

With this collective effort, something that began as a small scale operation of selling mistletoe in the front yard has grown into an official business, raising thousands of dollars every year through stands at the Highland Park Village.

“We sell [the mistletoe] at stands in Highland Park Village like lemonade stands but instead of selling lemonade we sell mistletoe,” Wrubel said.

After the third year of the project, the team decided to donate the money to The North Texas Food Bank for the work they do and to support a cause closer to home.

“As the project grew, Stella’s ideas grew and the focus changed to local to the North Texas Food Bank,” Jennie said.

Wrubel is confident that they can reach this year’s goal with fundraising through corporate matches and charity SoulCycle spin rides. The mistletoe team also hopes to eventually have one mistletoe stand in all of the 13 counties that The North Texas Food Bank serves.

“We want to expand, which is something that every business wants to do,” Wrubel said. “In this case, the bigger, the better and the more money means the more people that are fed.”

Wrubel hopes for the project to continue to grow and touch more lives. She experienced impact of the project firsthand when she went to Hodgkins Elementary, a school in the Dallas Independent School District that participates in The North Texas Food Bank backpack program. This program provides kids with a bag of nonperishable food to take home to their family over the weekend.

“The most powerful experience I think I had was when I got to go to Hodgkins Elementary and met the children I was helping and give them their food,” Wrubel said. “They were so polite, they would look at us and really truly mean it when they said ‘thank you so much you are feeding my family.’”

Lucy Wrubel, Stella Wrubel’s mom, sees this project as a family tradition that has transformed their holiday season for the bet-

ter. “We just found ourselves in front yard selling mistletoe and something magical happened where all the sudden we didn’t care so much about what was under the tree. We were just all together decorating mistletoe,” Lucy Wrubel said. “It changed the holidays that year. The next year we did it again. It has continued to be now what the holidays mean to me.”