The Humans Behind Humans of Hockaday 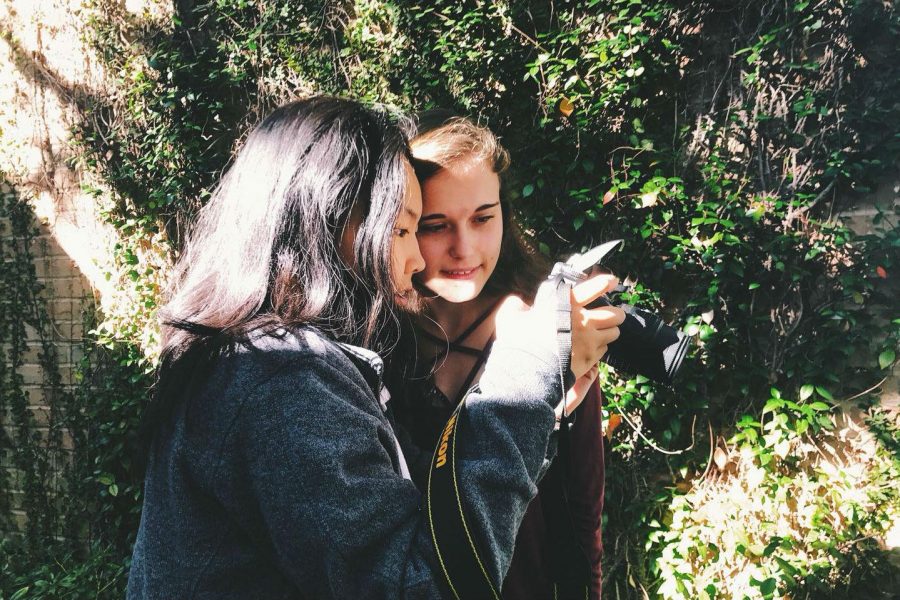 ABOVE – Picture Perfect: Junior Alexa May looks at the picture that junior and Head Photographer of Humans of Hockaday Cirrus Chen took of her to appear on the account.//Photo by Kristi Li

“Humans of New York,” the brainchild of photographer Brandon Stanton, began in 2010 as an effort to collect 10,000 pictures of New Yorkers and plot them on a map around the city. Stanton’s project evolved as he chatted with the subjects and began to include snippets of their conversations that captioned the pictures. His photoblog rapidly gained followers. As of today, “Humans of New York,” also known as HONY, has amassed over 7 million followers on Instagram.

Cirrus Chen and Li first gathered the i nspiration for creating an account similar to HONY when they attended a SMU Tate forum where Stanton was a guest speaker. They also wanted it to be related to photography, since it is a shared passion between the two.

“The girls are incredibly talented with how they have chosen to visually communicate ‘Humans of Hockaday,’ and the inclusive representation of the Hockaday community will be seen as the stories accumulate over time,” Brower said.

“Humans of Hockaday” has a wide variety of interviewees, ranging from students of all ages and grades to faculty and staff members. Each with their own story, “Humans of Hockaday” plans on creating something that can “represent the whole Hockaday community.”

“It doesn’t matter who we pick, because we think everyone has a different story. No matter who we interview, it’s going to be cool because everyone has aspects in their lives that they don’t show to the public,” Michelle Chen said. “Our goal is to get that out. We don’t want to be surface level; we want to get their stories and reach deeper into their personalities.”

With a total of 194 current followers on Instagram, “Humans of Hockaday” requires a lengthy time commitment. Li, Cirrus Chen and other contributors meet at the beginning of each week to plan out who they want to reach out to. Then, after the interview and photo shoot, Li and Cirrus Chen edit each photo. The time it takes to do the interview and review the post is around one hour. They try to post around three times a week. And this project requires time commitment for it to be successful.

“It has not affected me personally that much except that a lot of my free time was taken away,” Li said. “But I don’t care because I enjoy getting to know people and sharing their stories with the rest of the Hockaday community.”

Li and Cirrus Chen are the main photographers for the account and are the ones who decide where the photos and interviews will take place. In an effort to make “Humans of Hockaday” as visually aesthetically pleasing as it is to read, they scope out “artsy” places around campus to do their interviews each week.

“Our third week’s posts were actually tak- en in the cafeteria. Both of us are huge fans of photography and we are beyond happy to be able to connect with people through our lens,” Li said.

However, due to the large time commitment, Li and Cirrus Chen have taken on the roles of interviewers as well as photographers, a job that only Black and Michelle Chen had done before. At first, Li confessed that she was nervous because “both of them were not in Fourcast and they haven’t had any experience in interviewing others before.” But with the help of Michelle Chen, who is a Fourcast staff member, they are growing more confident in posing the right questions to get subjects to reveal their stories.

So far, the feedback for the account has been positive. “Humans of Hockaday” caters to a wide audience, and some faculty and staff members even follow the account, including college counselor Courtney Skerritt. The in- terviewees have ranged from senior Samantha Watson, student council president; junior Ra- dina Temelkova, a boarder from Bulgaria; and Upper School math teacher and swim coach Rachel Grabow.

“I am super happy and grateful to see so many people complimenting and supporting their friends under every post. There were a lot of people coming up to us and asking to be featured on the account as well,” Li said.

One particular interview that stands out was with Yolanda Rodriguez, a SAGE dining service worker. Her story was shared in October, and students reacted supportively, commenting “That’s such an amazing and humbling story. I needed a privilege check” underneath the pho- to. Going into the interview, Rodriguez believed they were merely going to ask about her career at Hockaday, but was surprised when Li and Chen began asking her questions about the happiest and saddest moments in her life.

Rodriguez moved to America at the age of 11. She was born and raised in Mexico, where her older brother took care of her. Her mother died when she was six and her father was not present in her life. When she was in the sixth grade, her brother decided to move their family to the United States for a better life. In the interview, Rodriguez spoke of a time where she was searching for a laptop for her family friends in Mexico, and only had $200 in her pocket. She prayed and found one for $125, saying it was a “miracle.”

“I know a lot of people at Hockaday, and they know a lot of things about my life. I didn’t feel uncomfortable sharing some personal stories, because people learn about people. Before, when people looked at me, they didn’t think about my past. But now when students see me, I can tell they feel sorrow and empathy for me,” Rodriguez said.

Rodriguez saw a heartwarming reaction to her interview when two students brought her a Barbie. In her interview she said that “never in [her] life did she have a Barbie.” How- ever, Rodriguez hope that her story can be a life lesson for the audience.

“I hope people will read this story, because in this life, nothing is easy. Everything is hard, and people have problems. I hope it’s a demonstration to the people at a low point in their life, to never give up, to continue,” Rodriguez said. “Life keeps going. My life was sad, but it’s still happy. I’m happy with my life here.”