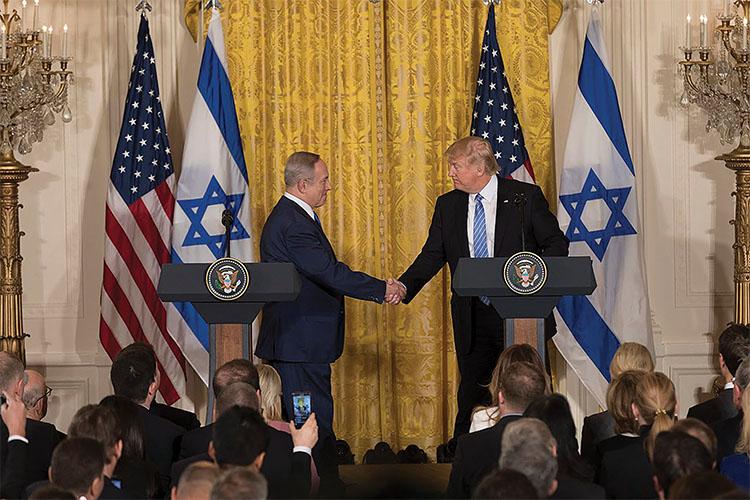 PICTURED ABOVE: President Donald Trump and Israeli Prime Minister Benjamin Netanyahu led a joint press conference on Feb. 15 during which Trump disclosed that he considered both two-state and one-state solutions viable.// Photo courtesy of the White House.

On Dec. 6, President Donald Trump broke almost 70 years of American and international foreign policy by officially recognizing Jerusalem as the capital of Israel and announcing the relocation of the U.S. embassy from Tel Aviv to Jerusalem, acting on a promise he made early on the campaign trail.

While many pro-Israel supporters and politicians welcomed the news, many foreign policy experts agree that this controversial decision will not only escalate the already violent situation between the Israelis and the Palestinians, but will also create anger toward the U.S. from countries in the Middle East.

Jerusalem is holy site to three major religions: Christianity, Islam and Judaism. For Christians, Jerusalem was the location for the crucifixion of Jesus Christ. For Muslims, who call Jerusalem “the farthest mosque,” the al-Aqsa Mosque in Jerusalem was the destination of the Prophet Mohammed on his Night Journey from Mecca before he ascended to the Heavens. For Jews, Jerusalem is where their Temple, the home of their one God, stood, and contains the Holy of Holies and the Western Wall, the holiest place where Jews can pray.

Britain provided the land of Israel to the Jews as a refuge following World War II. But Palestinians also occupy parts of this land on the West Bank and Gaza, creating tension and violence between the groups.

In 1947, the United Nations announced a plan to divide the land into two states: one Arab and one Jewish. However, they left Jerusalem out of the plan.

Whether Jerusalem belongs to Muslims or the Jews, Israel is a widely contested issue, causing violence and fighting within the city.

Both the Palestinian people and Israelis claim Jerusalem as their political capital, but the Israeli military controls the city populated by both Israelis and Palestinians.

The issue has been officially disputed since the 1948 Arab-Israeli War. Prior to this, the United Nations considered Jerusalem a special international zone. During the war, Israel seized the city’s western half, and in the 1967, Arab-Israeli War it took the eastern half.

Israelis and Palestinians have been negotiating over the city for over 25 years, but no agreement has been reached.

The U.N. still does not designate Palestine as a state, because it does not meet all the criteria of having a permanent population, defined territory, government, or capacity to enter relations.

In an attempt to rectify the situation by allowing negotiations between the Palestinians and Israel, no nation, including the U.S., has recognized the city as either Israeli or Palestinian until last week. American diplomats generally consider this neutral stance necessary for peace.

In 1995, Congress passed the Jerusalem Embassy Act which required the U.S. embassy to move to Jerusalem. However, President Bill Clinton refused to enforce it, and the act stated that the move could be put off for six months if the president said it was essential for national security. Upper School History teacher Tracy Walder explained that every president since Clinton has refused to allow the move, until Trump.

Polls from the Brookings Institute found that only 31 percent of Americans support Trump’s deci- sion, and a large number of left-leaning American Jews are against it. However, many of Trump’s evangelical Christian supporters and some conservative Jews are in favor of it.

Many evangelical Christians. like Laurie Cardoza-Moore, who runs a television program called “Focus on Israel,” support the decision because of a prophecy in the Bible.

“As far as God is concerned, Jerusalem has been the eternal, undivided capital [of the Jews] since the reign of David,” Cardoza-Moore said to NPR last week.

Some Zionist Jews also agree with the Bible’s prophecy regarding Jerusalem belonging to the Jews, including the Mayor of Jerusalem Nir Barkat.

“If you go back, even legally, [Jerusalem] was never anything but belonging to the Jewish people,” Barkat said to NPR last week.

Jewish-American casino mogul Sheldon Adelson and his wife Miriam Ochsorn, the largest individual Republican donors in 2016, have pushed for the move of the embassy and criticized the Trump administration for not acting fast enough verbally and by donating less than they have in the past.

Analysts say that Trump’s decision may have been pressured by these far-right Chris- tian supporters and wealthy donors.

Among mixed opinions from Americans, Trump’s decision has also sparked anger from both Middle Eastern countries and Israel.

Although Israel’s Prime Minister Benjamin Netanyahu and other members of the Israeli government praised Trump’s decision, many Israelis fear the repercussions from the Palestinians, whose factions called for three “days of rage,” prompting the U.S. State Department to issue a travel warning for the West Bank and Jerusalem’s Old City.

During these days of protesting from Dec. 7-9, it was reported that two Palestinians were killed and 35 injured in fights with Israelis on the Gaza Strip’s border. In Bethlehem, the Palestinians protested by throwing stones, and Israeli troops responded with tear gas, rubber bullets and stun grenades. Israeli troops also killed two Hamas members during airstrikes in retaliation for a rocket attack from Gaza.

Palestine Liberation Organization Secretary-General Saeb Erekat said “President Trump tonight made the biggest mistake of his life” and “just destroyed any possibility of a two-state (solution).”

The Trump administration defends its decision, claiming it was a “recognition of reality” and that the move would have no impact on the boundaries or borders in the negotiation.

Other supporters of the decision include U.S. Ambassador to the United Nations Nikki Haley and her Israeli counterpart, Danny Danon.

Haley said that the peace process was not yielding results.

“The United States took this step in full knowledge that it will raise questions and concerns. Our actions are intended to help advance the cause of peace,” she said.

Haley also claims that the U.N. has been detrimental to the peace process.

“The United States no longer stands by when Israel is unfairly attacked in the United Nations,” Haley said.

Walder said that the decision could have negative effects on the United State’s relationship with the Middle East, including countries like Saudi Arabia, where the U.S. gets most of their oil.

“I don’t think we should be catering to every whim of the Middle East. But we can’t be making sweeping decisions like this without considering the implications,” Walder said.

“These procedures do also help in the extremist organizations to wage a religious war that would harm the entire region, which is going through critical moments and would lead us into wars that will never end, which we have warned about and always urged to fight against,” Palestinian President Mahmoud Abbas said in a televised address.

Walder said that the reason this decision was so dangerous in respect to terrorism is because it provides Hamas and other terrorist groups a cause to unite around: their anger towards the U.S. and Israel.

Additionally, Walder explained that the U.S. has now lost leverage over Israel and Palestinians to gain peace, because Israel now has little reason to compromise in the negotiations.

New York Times journalist and foreign policy expert Thomas Friedman wrote that Trump’s decision was un-strategic as he made a large concession without receiving any in return.

“Why in the world would you just give this away for free and not even use it as a lever to advance the prospect of an Israeli-Palestinian deal?” Friedman asked in his article.

The future of the Israeli-Palestinian relations is still up in the air, but foreign policy experts from the U.S. and other countries agree that peace is a long way off.

Photo courtesy of the White House