Athletes Hidden in the Hockaday Hallways 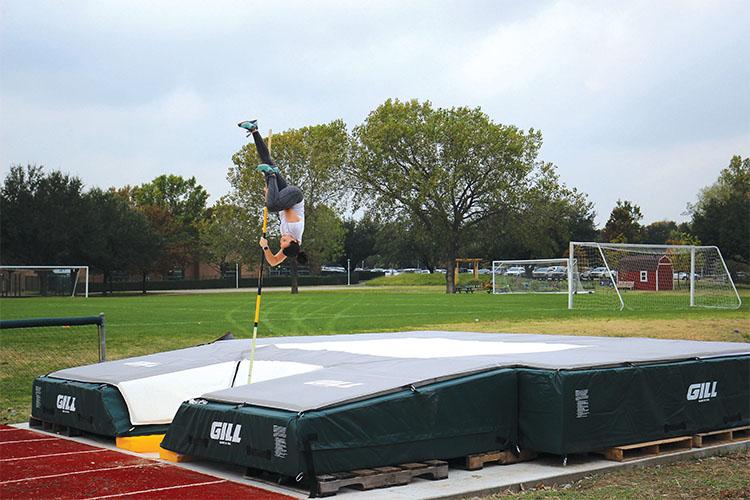 PICTURED ABOVE: PLANT THE POLE| Chemistry Teacher Jen Fore flies into the air while practicing her pole vault technique at the Hockaday track.// Photo by Sarah Schultz

From basketball games to coaching to women’s soccer leagues, faculty members continue to be involved with athletics long after their high school and college years.

One of the main reasons Kramer ever began teaching is due to his involvement with athletics. He initially got into high school teaching was when he became tired of the rumor that history teachers were usually coaches too and always focused more on their coaching than teaching.

“I wanted to prove you could be a good teacher and a good coach,” Kramer said.

This was in 1973, a year after Title IX, when Kramer was teaching at an all-girls school in Nashville, and was asked to coach track, basket-ball and cross-country. When he moved to Dallas in 1980 and started to teach at Hockaday, he coached volleyball and basket- ball, then just track until about 1996.

“I feel like sports are an integral part to the school. Good sports teams add immeasurably to a better school experience,” Kramer said.

Today Kramer stays active and plays basketball games with some other Hockaday faculty members. He initially got into high school teaching was when he became tired of the rumor that history teachers were usually coaches too and always focused more on their coaching than teaching.

“I wanted to prove you could be a good teacher and a good coach,” Kramer said.

He views sports as a way to improve your health, and as a way to work as a team and meet new people.

“I love building teams and being a part of teams, whether they are athletic or work-related,” Murray said.

Fore competed in track, specifically pole- vault during college. She is an avid athlete and recently achieved a personal record in pole-vaulting when she competed nationally against other women.

When Fore first arrived at Hockaday, in fall 2015, she learned that Hockaday didn’t have any pole-vaulters. She realized then that she wanted to get involved in track and field again and started coaching Hockaday’s first formal pole-vaulting program with Coach Bean.

Fore believes that if you’re passionate about a sport, you shouldn’t stop just because you have a different career or you have left college.

In contrast to Kramer, Murray and Fore, Bean’s job is solely about coaching. He par- ticipated in track, football and cross-country in high school and went into specifically hurdling and sprints in college. He ran the 400m hurdles for the U.S.A. track and field team after college. In fact, Bean’s U.S.A. team coach, Coach Mann, coaches Hockaday hurdles.

“He motivated me to be the person I am,” Bean said.

Bean follows one of coach Mann’s mantra and applies it to his coaching.

“If you are willing to come out and train, you can be successful at anything,” Bean said.

Today, Bean coaches Hockaday basket- ball and track, is head of Athletics at Hockaday and plays intramurals with his friends. In order to keep in shape, he trains individually, often with a personal trainer.