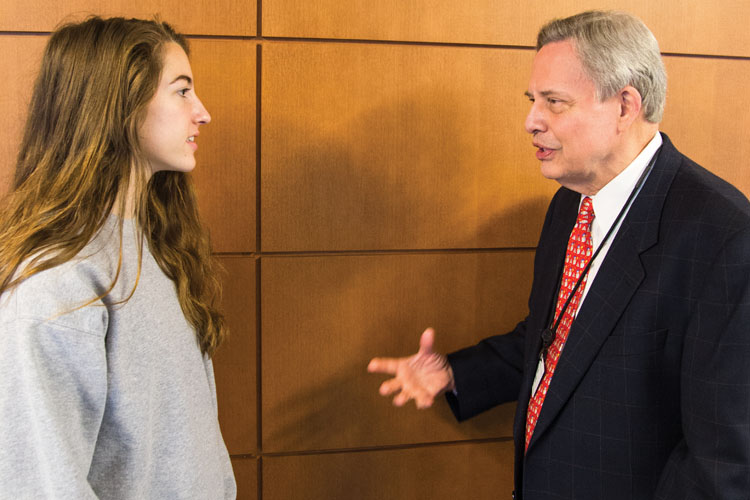 As April approaches, preparation for the Independent School Association of the Southwest Arts Festival has been kicked into high-gear.

The event, which will be hosted at Hockaday, is set to take place on April 12-14. The sheer magnitude of the festival is so large that it requires a school-wide effort just to plan it, and it will occupy every available space on campus.

Hockaday first learned that they would host ISAS back in 2004. Although the festival itself lasts only three days, preparation for the event dates back to nearly three years ago, when Hockaday first began getting bids on tents, art panels and food. The school also started taking note of the different ways in which various hosts have run ISAS in previous years. However, plans for preparation became more concrete last spring, when a student-run planning committee was compiled. Senior Audrey Magnuson is the chair of this committee.

“There is so much that goes into actually having a functioning festival,” said Magnuson. “We have to essentially utilize every square inch of our school in order to accommodate the 4,000 people who are going to be on campus on average every single day.”

After accepting position as chair, Magnuson began to reach out to different students in order to recruit members for her board. When enlisting students, she choose them not only based off of those who showed an interest in the arts but also those who did not participate in an art discipline in order to encompass a vast variety of voices. The committee contains a total of 19 junior and senior students.

Now, Magnuson continues to run her committee in order to help plan for this large-scale festival.

Essentially, the ISAS student board functions as a student “think tank,” and serves as a way for student input to be incorporated into the festival.

“The job of the committee so far is to be subtly adding on layers of student experience,” Magnuson said.

On Sept. 29, each school attending the 2018 ISAS festival was required to send a representative to Hockaday in order to be given tours around the campus. The student committee was in charge of leading these tours and making certain that these representatives would know their way around the school come time for the festival.

Aside from providing tours to the gathered representatives from the participating schools, the student board has been working closely alongside the Fine Arts Board to help plan for the festival. Magnuson in particular frequently meets with Ed Long, Dean of Upper School and Festival Director for ISAS, to further solidify and bring to life ideas for the arts celebration.

As the festival weekend approaches, the committee along with the rest of the faculty and staff involved in the planning process will begin to focus more on the logistics of hosting ISAS, such as their budget and physical work put into setting up the festival itself.

“A lot of planning is not necessarily what you see on the day of, but actually having to transform the schools into venues for every single different type of art form,” Magnuson said.

Based on the feedback that Hockaday has received thus far, the fast-approaching ISAS is predicted to reap the highest student attendance rate out of those in the past—even more than last year’s ISAS, which was held at the Casady School and had claimed the title of “greatest attendance rate.” However, the 2018 ISAS will include seven more schools than previous years .

The expected student turnout is around 3,300 students, excluding Hockaday’s own students. Factor in parents, participant and faculty and administration members who travel with the students pushes the count to a grand total of 4,000 attendees.

Because of such large numbers, the festival will occupy every vacant space that the school has to provide.

“This sounds like an exaggeration, but it truly involves every room in the school,” Long said.

Different sections of the school will be designated for different arts. For instance, the Nancy A. Nasher and David J. Haemisegger Theatre will house dance performances and scenes from musicals, different films will be screened in the Clements Lecture Hall, orchestra groups will perform in the Small Gym and choir in the Hicks Meeting Room. In addition, the Penson Athletic Center will be dedicated solely to the visual arts, as it will exhibit a half mile’s worth of artistic creations. The track field and surrounding area is designated for rock and marching band performances, while the black box will present one-acts.

Not all spaces will be devoted to show-casing arts, however. Classrooms will serve as homerooms for the various attending schools, offering a place to simply relax or prepare oneself for an upcoming performance. Additionally, Graduation Terrace will serve as a sort of common area, in which no specific fine art is designated to.

An integral part of the festival is providing various food sources in order to satiate the needs of the attendees. For the sake of efficiency, there will be two different locations of food throughout the festival— at the two “circles” on campus. The first arrangement of food trucks will be situated at Penson Circle, and the second, at the circle outside of the Fine Arts building. By having multiple locations for food, the hope is to even out the crowds that tend to gather around the food trucks.

Because so much manual labor is required for the festival to be properly set up, some of the more complex items will be set up days in advance.

“We will start feeling the presence of the festival a week before the festival,” Long said.

The larger tents, which include the food, improv, coffee house and jazz and rock tents, will begin to go up a week before the festival due to the time that they take to set up. To help designate time for setting up, all classes will be canceled the Wednesday before the festival.

Although the festival itself is very time consuming to put on, it is simultaneously a great honor to host.

“It really adds another level of pride for our arts and for our school when [ISAS] is in our own vicinity,” Wood said.

Ultimately, ISAS is a festival unique to this part of the country, offering young high school students the opportunity to express their different artforms for each other.

“Every year we have various schools from New York to California that have come to visit the festival and say ‘Gee, we would like to do this,’ but realize they can’t due to a lack of land,” Long said. “Ultimately, by putting on the festival, we are enabling a unique fine arts experience that doesn’t happen anywhere else in the country.”