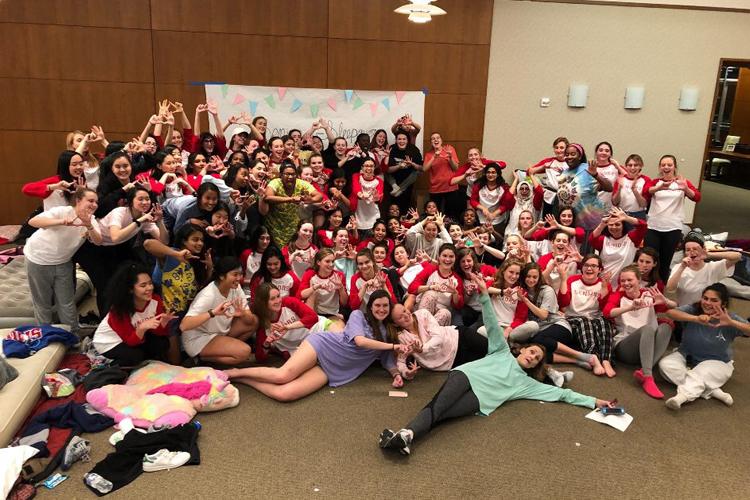 PICTURED ABOVE: The class of 2018 and Form IV Dean Rebekah Calhoun pose for a grade-wide photo. Photo by Alejandra Suárez.

Sitting on her air mattress and singing pop hits from the 2000s at the top of her lungs, Senior Sophia Silva looked out upon a sea of her classmates. Snacks were piled high and Apples To Apples game cards littered the floor of Hicks on the night of Jan. 30 as the class of 2018 gathered for a senior sleepover.

The senior sleepover was reinstated as a tradition for the graduating class with the class of 2017 after being on hiatus since 2008. Although this year’s seniors were enthusiastic about continuing the tradition, Form IV Form Dean Rebekah Calhoun acknowledges that not all senior classes are the same.

“It’s been kind of hit or miss over the years just depending on the senior class and if it was something they were interested in,” she said.

After hearing suggestions for a senior sleepover from several advisories as well as from seniors at the October Stuco Stop-by, Form IV Class President Rory Finn proposed the idea to Executive Council. Finn hoped that the sleepover would promote further bonding in the class of 2018.

“We just wanted everyone to have fun together. The last time we relaxed and spent some quality time together as a grade was August retreat, and I think it was nice to be able to just revisit that community and bonding as we start second semester,” she said.

Along with the students, Form IV advisors joined the fun throughout the evening. While the advisors were assigned specific shifts, Calhoun stayed with the class of 2018 for the entire night. One of her favorite moments of the sleepover came when Taylor Swift’s “Love Story” began to play and the seniors began to slow dance with one another.

“I loved seeing everyone sitting around playing games and hanging out and being silly and enjoying getting to be together,” Calhoun said.

The highlight of Finn’s night took place during the group photo when Calhoun dove in front of the seniors, initiating cheers throughout the crowd.

“She does so much for our grade, and I think it was a great moment for all of us to really show our appreciation for her,” Finn said.

After a successful senior sleepover with the class of 2018, Calhoun hopes that the event is continued with the senior classes to come.

“I think it’s a great opportunity to just reconnect and come together before we start looking ahead to all things graduation where people have differences of opinion. But hopefully, this reconnects us in a way that we can say, ‘this is what’s best for our whole group,’” she said.