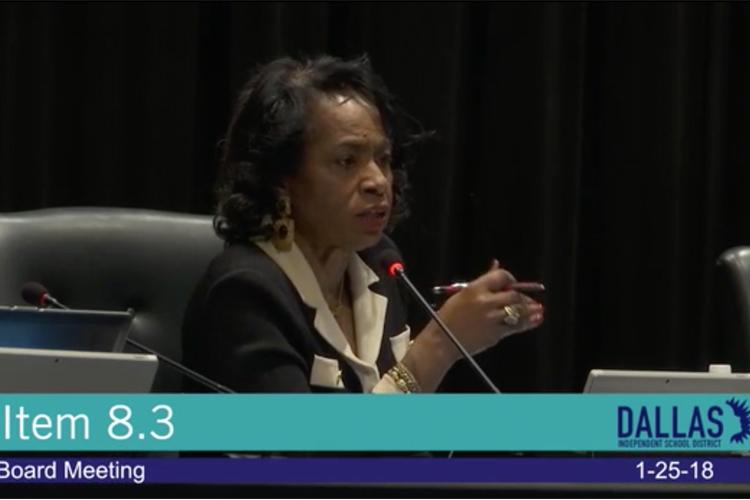 On Jan. 25, the Dallas Independent School District Board convened for their monthly meeting. Senior Neha Dronamraju was able to attend as a part of her Leadership ISD work with the school district and observed public speakers and important votes take place for future changes in the district.

This meeting was especially crucial for Dallas ISD because the board had identified five underperforming schools to potentially close for the next school year. In a unanimous vote, Thomas A. Edison Learning Center, C.F. Carr Elementary School, and Edward Titche Elementary School will all be closed for the 2018-2019 school year. Additionally, despite opposition from board members Bernadette Nutall and Joyce Foreman, J.W. Ray Elementary School and John F. Kennedy Learning Center will also close and be rezoned so displaced students can attend nearby institutions.

Dronamraju, who has studied the issue of underperforming schools in her own Senior Independent Study commented on the idea that although schools closing for the next school year is upsetting, it also raises the question of finances in the Dallas school district.

“Sometimes, people assume that Dallas schools have enough money to go around, but in reality, the number of schools open right now is raising a real concern about how to appropriately pay teachers as well as provide resources to students,” Dronamraju said.

Some schools, such as Sudie Williams Elementary are underperforming but not necessarily at the point of closure. For these schools, the board has decided to recalculate the enrollment numbers and rezone 215 students to nearby K.B. Polk Elementary.

On the topic of adequate resources in DISD, the board also unanimously agreed to enter into contracts with various marketing and advertising suppliers for districtwide use but were careful to note that these agreements should not exceed $1,000,000.

Dronamraju was pleasantly surprised by this decision because she believes that an increased revenue and branding movement in the education system will motivate future donors and business to give back to the Dallas community.

“It is important to remember that Dallas ISD is a business just as much as it is an education system. In order to keep these schools alive, there needs to be a thriving economy within the schools themselves,” Dronamraju said.

Some of these business agreements that were decided on during the meeting include a new contract with Compucom systems for better wi-fi networks and laptop systems and an agreement with HIPPY USA for an operating and licensing fee for Early Learning Education resources.

In addition to more partnerships with businesses, the board also voted on various safety agreements to increase security in schools. One of the main agenda items that passed was to ratify and approve an agreement between the police departments of Carrollton and Dallas.

In reflecting on all the agenda items passed and discussed at the meeting, Dronamraju encourages more high school students to attend the meetings and get involved with their Dallas community.

“The schools that are experiencing these changes are schools that we tutor at regularly, and it would be amazing if more people spoke up about their experience with the education system,” Dronamraju said.

The next Dallas ISD meeting will be on Feb. 22 at 6:00 pm at 5151 Samuell Boulevard Conference Area and is open to the public.