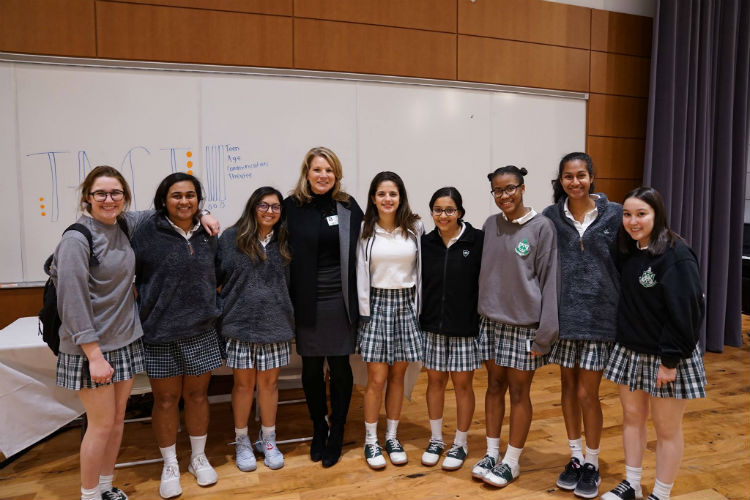 PICTURED ABOVE: Speaking to the nearly 75 students and a dozen faculty members in Clements Lecture Hall, Gates focused on her meandering path in politics and her current position as the city council member for District 13. Photo by Eliana Goodman.

On Feb. 6, 2018, Dallas City Council Member Jennifer Staubach Gates addressed members of the Upper School student body about her journey into local government as the first speaker in the series about women in politics created by Director of Service Learning Laura Day.

After discussing the idea for this series with members of the senior class and the history department faculty that teach U.S. government, Day reached out to a few parents of Hockaday alumnae, whom she knew had connections with women in politics, in order to invite several speakers to campus.

“I was just realizing that that is something that no one has ever really come to talk to us about. Like what is it like to be a woman in politics. We are always talking about women aren’t CEOs and aren’t in politics, but no one is bringing people in to talk about what that journey looks like,” Day said.

Before Gates spoke, Day presented statistics on the dearth of women in political roles. For example, women hold 22 seats in the Senate and 84 seats in the House of Representatives, composing less than one-fifth of all individuals in Congress. At the local level, women represent only two of the 14 Dallas city council districts.

Because of this lack of women in politics, Celese Gierhart, the president of the sophomore class, appreciated hearing about Gates’ experience.

“I think it’s important to share stories of women in politics because it encourages the involvement of women in this field and gives girls access to role models in this male-dominated area,” Gierhart said.

Gates, however, did not only speak about her experience as a woman on the city council. She also discussed the diversity of District 13, which no only encompasses the affluent Preston Hollow area but also Vickery Meadows, a neighborhood with a large population of refugees and immigrants and one that only had 15 members vote in the 2017 city elections.

One example of this representation occurred in 2014 during the Dallas Ebola crisis. The first patient diagnosed with the infectious disease in the United States, Liberian Thomas Eric Duncan, lived in Vickery Meadow.

Gates recalled asking Mayor Mike Rawlings to allow her to attend a meeting with the Center for Disease Control and Prevention and the current governor, Rick Perry, in order to advocate for the refugee community in her district. After listening to the CDC and staff from Presbyterian hospital discuss the possibly contaminated materials in the hospital, Gates became infuriated that no one appeared concerned for the residents of Vickery Meadow.

“I said what about the contaminated materials in my neighborhood, in an apartment complex that is surrounded by 25,000 people. I just kind of started spewing statistics about the neighborhood, which I was the only one who knew that,” Gates said. “I kind of went apoplectic. I was going to represent these people and they might be under a health threat.”

Gates, also, was not shy about discussing the politics of the city council.

“I get frustrated when council members do not share the common goal of moving the city forward and instead promote themselves or their own agendas and I will refrain from naming names,” Gates responded.

The next speaker in the series is Wendy Davis, a former Democratic Texas state representative, and 2014 Texas gubernatorial candidate. Davis will speak on Feb. 23 at 11:45 in Clements Lecture Hall.

On March 20, Day will conclude this year’s series with a discussion on how to get civically involved. Day will explain how to register to vote, how to work for a campaign and how to engage with elected officials to enact real change.

“[I want to] give you real tangible skills so you can actually start to create change right in that second,” Day said.