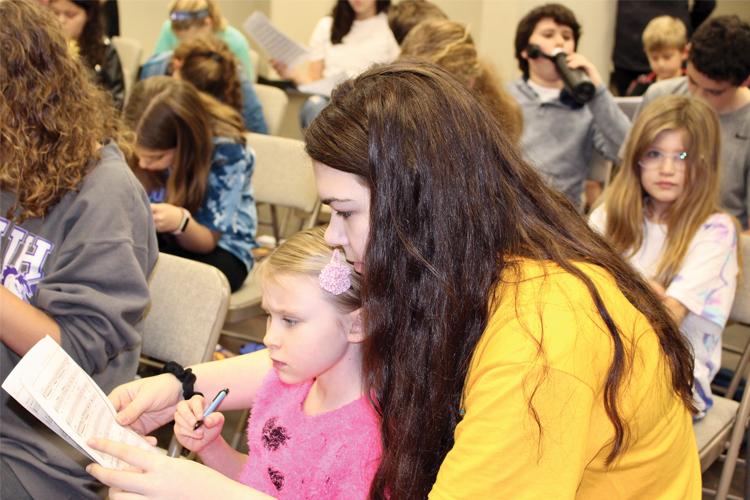 PICTURED ABOVE: STARTING YOUNG | Ginsberg helps one of her students learn music for JPAS’ “Fiddler on the Roof, Jr.”// Photo by  Cameron Ooley

When she’s not on the stage, senior Cate Ginsberg teaches and directs children for the JPAS’ upcoming show.

The curtains open. The spotlight beams. The orchestra strikes up a hearty rendition of “Tradition.”

But senior Cate Ginsberg is nowhere to be seen on stage. A theater veteran who has performed in the Hockaday Upper School musical every year since her freshman year, Ginsberg now stands backstage on the other side of the curtain, helping direct young actors to their places.

The cast of JPAS’ show consists of children and teens with ages ranging from six to 16, and Ginsberg’s job is to help teach and direct them as well as help the show’s director and co-choreographer, Linda Leonard, in any way that she can.

“I usually help the kids learn music, make sure they’re staying on task, write down blocking notes, or say, ‘Hey, this is a difficult part, let’s go over it again,’” Ginsberg said.

The directors of JPAS, including Leonard and producer Alise Robinson, decided at the end of last summer to put on “Fiddler on the Roof, Jr.” for the center’s spring show. Auditions were then held before holiday break, and afterwards, the cast and crew have been meeting for rehearsals every Sunday from 1:30 to 5:30 p.m.

“Once we get a little closer to the show in March—and there are multiple shows and two casts since so many kids sign up—we’ll have a week of tech week where the kids will come in every day after school until about 8 or 9,” Ginsberg said.

And this isn’t Ginsberg’s first experience working on the more technical side of theater. For the past two summers, Ginsberg has worked as an intern and a teaching assistant at the JCC’s summer camp, where young performers come to take classes and be a part of the summer musical.

“Watching the kids grow has been my favorite part about working at the JCC these past few years,” Ginsberg said. “I saw it every day at the summer camps, where I was able to look back at what the kids accomplished in a few weeks and say, ‘I’m so proud of you!’”

Both Leonard and Robinson agree on Ginsberg’s affinity for connecting with these young actors. When Robinson asked Ginsberg last year to work on JPAS’ 2018 spring show, she immediately thought of Ginsberg’s responsibility and love of musical theater.

“As the director of the program, I trust her,” Robinson said. “She’s so reliable and always ready to roll up her sleeves. She’s the kind of person you want on your team.”

Indeed, throughout her time working on “Fiddler,” Ginsberg has delved into every task she has been presented with, which include not only the enjoyable ones—assisting with blocking scenes and working on music with kids one-on-one—but also the less pleasant ones.

“I love kids, and these kids are really great, but things are not as fun when you have to discipline them,” Ginsberg said. “It can be a challenge to step in and say, ‘Hey, take this seriously,’ because you want them to have fun and have a good time.”

Leonard, though, affirms Ginsberg’s ability to act as a leader and teacher for these young performers.

“She has a positive attitude and a maturity about her that is uncommon in young artists,” Leonard said. “Cate is kind, but strong. The students love her, and she is able to assist in teaching and be effective in everything she does.”

Because Ginsberg will be heading to college next fall, she believes that this spring show at the JCC will likely be her last.

Prior to beginning work at the JCC two summers ago, Ginsberg had not had any technical experience. Thus, Ginsberg, whose majority of time in theater was spent on stage, has enjoyed gaining a more well-rounded sense of what it takes to put on a show.

“I’m a little sad about [leaving], but I’ve learned so much from the JCC. Before, I’d been strictly on stage and performing, and now I get to see the other side of it,” Ginsberg said. “This has helped me see as a performer that tech is working really hard backstage, and I think that not enough people realize that tech needs to be appreciated.”