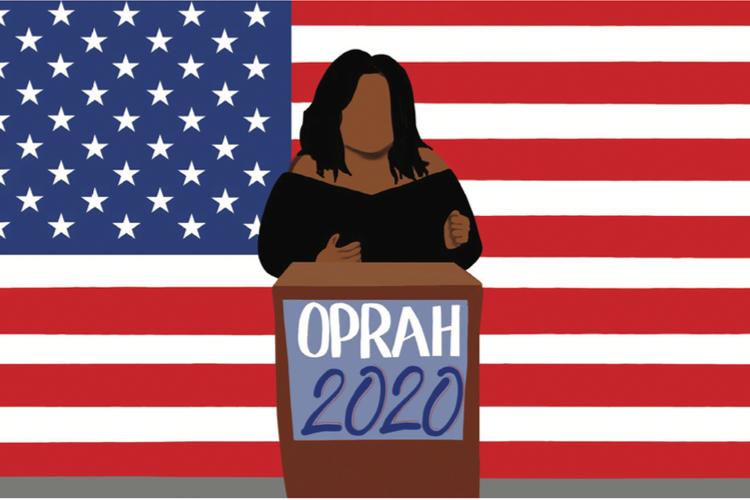 On Jan. 7, Oprah Winfrey was awarded the Cecil B. Demille Award at the Golden Globe Awards for her “outstanding contributions to the world of entertainment.” After receiving this prestigious award, the entertainment mogul delivered a powerful speech that earned her a lengthy standing ovation. Winfrey spoke about her experience as a woman of color in Hollywood and made a powerful statement about that evening’s emphasis on the Time’s Up movement.

I am not embarrassed to admit that after listening to Winfrey’s words, I had to retrieve a box of tissues. But while I saw her address only for what it was, many of my fellow viewers saw it as Winfrey’s first appearance on her 2020 campaign trail.

Almost immediately after the Golden Globes, my phone lit up with claims that Oprah Winfrey is considering running for president in 2020.

I admire and respect Winfrey wholeheartedly, but this is a preposterous idea.

When President Donald Trump was elected to office, one of my endless fears was that other celebrities would feel that they could also enter the political sphere. Now, it seems to be coming true, and if we continue down this path, we might be watching Kanye West rap a rebuttal behind a podium in a few years.

While Oprah Winfrey, who is not only an actress and producer but a committed philanthropist, is the cream of the crop in Hollywood, even her desire to run for president should be concerning.

I understand that many Americans are suffering from political fatigue and looking for fresh faces in politics. I too would appreciate some changes in the makeup of our government officials, but I would also appreciate if political positions continued to be filled by politicians. Why? Because that is their job and their job only.

Whether you like Trump or not, nobody can deny that this past year in politics has been, to put it nicely, far too exciting. I don’t remember a day since Trump was elected that I did not receive a frightening and alarming CNN notification.

Politicians, unlike Trump, or Winfrey for that matter, are well-versed in government proceedings. They understand how to negotiate and enact change effectively. They are also, for the most part, predictable and firm in their beliefs. What is Winfrey’s political platform?

What are her views on tax reform? Healthcare? The Israeli-Palestinian conflict? Oprah Winfrey, unlike a politician, does not have an established platform on these vital issues, so how could we consider her a legitimate political candidate? Should we lower our standards in considering who should run our nation?

Winfrey has proven over the course of her impressive career that she can do anything that she sets her mind to. But should she do everything? Winfrey is one of the most idolized people in the country, but being the President is simply not in her job description.

And in the words of Saturday Night Live’s Michael Che, “can’t we just have a regular one for a while?”