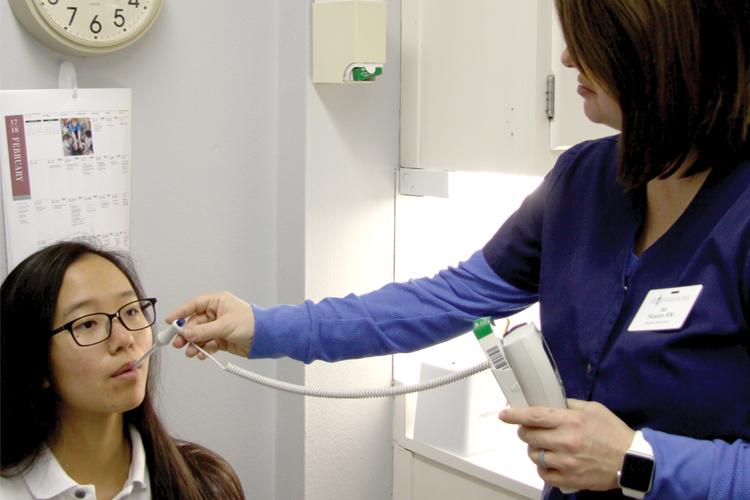 PICTURED ABOVE: Nurse Ali Hosbin takes the temperature of sophomore Lily Zhou. Fortunately Zhou did not have a fever or the flu. Photo by Katie O’Meara.

Senior Hannah Sipes’s body begins to ache. Within the next half-hour, her head begins to pound and she starts to get the chills. Only a few hours after it begins, she feels as though she cannot leave her bed. Sipes has the flu.

With a vaccine effective rate of roughly 30 percent, according to the Centers for Disease Control and Prevention, this year’s flu season has hit the entire United States with thousands being hospitalized. At Hockaday, the flu has been affecting students since November but has not resulted in the same effects seen throughout both Dallas and the rest of the country.

As of Feb. 7, according to The Dallas Morning News, there had been over 106 flu-related deaths within the Dallas-Fort Worth metroplex. These deaths represent 3.6 per- cent of the total 2,902 flu-related deaths that the state of Texas had reported on Feb. 2.

Throughout the United States, the flu illness rates have now reached a level equal to that of the Swine Flu epidemic of 2009. In a report released by the CDC on Feb. 9, their reports listed that one in every thirteen doctor visits were related to flu season.

According to Director of Health Services Erika Herridge, RN, the number of flu illnesses at Hockaday has increased, with this flu season being the worst that she has ever experienced in her six years at the school.

“This is really my first year where have had to track it every day and keep track of all attendance because of everything in the news and then not only in Dallas, but nationwide we definitely have more cases this year,” Herridge said.

Prior to working at Hockaday, Herridge worked at Children’s Medical Center, and she was there during the Swine Flu Outbreak in 2009. Yet she believes this flu is different from almost any of the others that she has seen throughout her years in the medical field.

“The flu season itself just seems different and the symptoms seem a little different than in years’ past, where if you had flu, it was definitive. You knew you had a high fever, body aches and those things,” Herridge said. “And now we are seeing people who have mild symptoms who only feel like they have a cold and then it kind of lingers and when they go to the doctors and they end up having the flu.”

For Sipes, she quickly experienced typical flu symptoms, including nausea and high fever. “I could not get out of bed for two weeks straight because I felt nauseous and physically could not stand,” Sipes said. “And then I actually caught post-flu bronchitis/pneumonia, and that lasted a while as well.”

In the past flu seasons, Sipes has received the flu vaccine, but this year she did not. Right as she was planning to get the vaccine, the flu infected her.

“The effectiveness of this year’s flu shot has been only about 20 to 30 percent. How- ever, the CDC still recommends that people get it because there is still a chance it would help,” Herridge said.

Even though schools in Dallas like Jesuit College Preparatory School of Dallas and Bishop Lynch High School have closed for two days due to the flu, Hockaday has not yet reached a status to warrant a school closing, according to Herridge. The two reasons for a closure would be if there was an absence rate of flu-related illness of above 10 percent when all three divisions are combined or if too many faculty and staff were out sick.

“Our highest percentage rate in Lower School was six percent and that was two weeks ago [in mid-January], and even since then it has been between one and three. Middle School has been really low and then Upper School has fluctuated somewhat,” Her- ridge said. “With last week at seven percent was the highest. But collectively as an entire school, our max was 4.2 percent absence rate, so nowhere near the ten percent that we would be looking for.”

In fact, according to Herridge and Head of Upper School Terry Murray, Hockaday has never had to close due to illness, even during the Swine Flu Outbreak in 2009 and 2010.

Even though the flu has affected the country more than normal, Herridge believes that Hockaday has taken steps that has limited the flu’s effect on the larger school population.

“Schools have to do what is best for them and what they feel like they need to do. But right now I feel like we are in a good place. We have excellent cleaning staff. We have upped our nightly cleaning with them,” Herridge said. “I communicate with Housekeeping and Carolyn [Hoke, Director of Housekeeping]. We look at our numbers and then say, ‘Okay I think we need to up our cleaning when the flu season starts’ so they clean nightly.”

“I have heard the phrase ‘you miss a day, you miss a week.’ We like to obsess about how much suffering we have that is true because the pace is fast and we are moving beyond. I think it creates a level of stress,” Murray said. “It creates pressure on kids to stay up later and create some bad habits for them, which then don’t help you get better. [This mentality] forces kids to come when they shouldn’t be here.”

Sipes agrees with Murray and believes that when students attempt to limit how much school they ultimately miss, they in fact just make everyone else around them sick.

“I think [the culture] definitely prolongs the flu. You have people where they may be out for a few days because of the flu, but once they are feeling like okay, even if they are still contagious they will come back because they really can’t miss anything,” Sipes said. “Even me, getting it over Thanksgiving Break, I was still out for a week of school. I missed so much that it was hard to get back. People who can manage to come back after a few days, like they feel like they can, are really just spreading it even more.”

As flu season continues, the administration will continue to monitor the flu within the school, and take necessary actions, when needed.