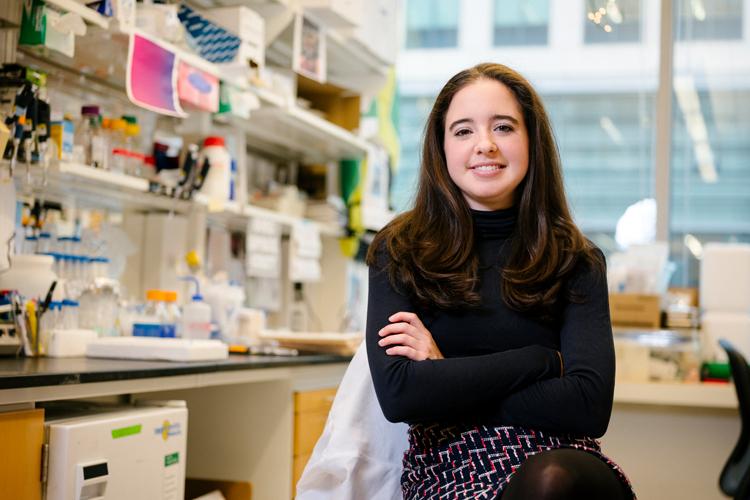 PICTURED ABOVE: Beytagh poses in the lab at MIT, where she conducts research for immunotherapy. Photo provided by Mary Clare Beytagh

Mary Clare Beytagh ‘14, a senior at MIT, received the 2017 American Rhodes Scholarship on Nov. 18. Out of 866 candidates, 32 students received this highly coveted award. Beytagh plans on pursuing a Master of Science degree in integrated immunology during her two-year study at Oxford University this upcoming fall.

“[Immunology] is a hot field, and there’s a lot of interesting questions to be answered,” Beytagh said. “The more you know the better you can develop [the cancer] therapies to help more people rather than just a subset.”

The process started for her in May 2017 when she met with MIT’s English fellowship office. First, she had to submit three essays and a letter of recommendation to her institution by the end of June. Then after a selection process, MIT nominated a group of students, including Beytagh, in mid-July to apply to the Rhodes Scholarship.

For the actual scholarship application, Beytagh submitted more letters of recommendation and an essay detailing her work and how she hopes to use the scholarship at Oxford. In the middle of November, 16 finalists from each of the 16 geographic districts met in Houston for an interview and two winners from each district were announced.

“I wanted to have a broader base in immunology as a subfield,” Beytagh said. “I’m interested right now in this idea of tumor antigens, which are proteins that rest on the surface of cancer cells that allow the body to distinguish them as foreign.”

If Beytagh enjoys the one-year masters program, she will continue her research into the summer and extend her work on immunotherapy for the second year at Oxford. However, she’s also interested in studying medical anthropology or history of science after her first year since she wasn’t exposed to these type of courses at MIT.

Along with applying to the Rhodes Scholarship, Beytagh turned in applications for several MD/PHD programs, which are funded by the government. Although Beytagh has been accepted into several programs already, she will defer her acceptance until after her time at Oxford.

Her first experience in scientific research was during her time at Hockaday when Science Teacher Barbara Fishel encouraged Beytagh to apply to UT Southwestern’s STAR Program after her junior year.

“Around that time, Hockaday was realizing that research was a big part of science and would be beneficial to the students,” Beytagh said.

Besides biology, Beytagh is also majoring in literature, which she decided to pursue at the end of her sophomore year.

“The first class that I took in the humanities was a literature course,” Beytagh said. “It reminded me that Hockaday has great literature teachers and English classes.”

While at Hockaday, Middle School English Teacher Diane Glaser first taught Beytagh what literature was and how exciting it could be to analyze books and write poetry.

“[Going to college] wasn’t a transition at all because Hockaday prepared me so well for writing in college and having excitement for literature and writing,” Beytagh said. “Hockaday has a big piece of why I find [literature] important and necessary for my life.”

“Mary Clare was one of those students who was always curious about ideas and how to be a better writer,” Bilhartz said. “It feels to me that she’s continue two qualities: her intellectual curiosity with a wide set of interest and the drive to excel and always get better.”

Beytagh would always meet with Bilhartz before and after turning English papers in to improve her writing style. She read widely on her own and brought what she learned into the classroom while also exploring the class discussions outside of the classroom.

With her science courses, science teacher Beverly Lawson influenced Beytagh when she taught her in AP Chemistry.

“[Lawson] told me that you’re going to fail sometimes and you have to learn how to study and you’re going to do well but it’s going to be hard,” Beytagh said. “She pushed me early on when things were tough.”

Beytagh grew immensely intellectually and personally in AP Chemistry, according to Lawson. One of Lawson’s lessons for Beytagh was patience, especially in scientific experimentation.

“[Beytagh] is everthing that we hope is good about Hockaday,” Lawson said.

Beytagh valued her time at Hockaday due to the teachers, the curriculum and the lessons taught. In addition to her academic studies, she also was a member of the Fourcast and danced as a pre-professional ballerina every day for several hours after school.

“Hockaday always implicated in us that your education should not be for the benefit of you but for the benefit of others,” Beytagh said. “It’s not about you but using your talents and the privilege that we’ve been given to go out and do something with it instead of sitting back and thinking you can’t do anything.”