Mothers and Daughters Partner in Business 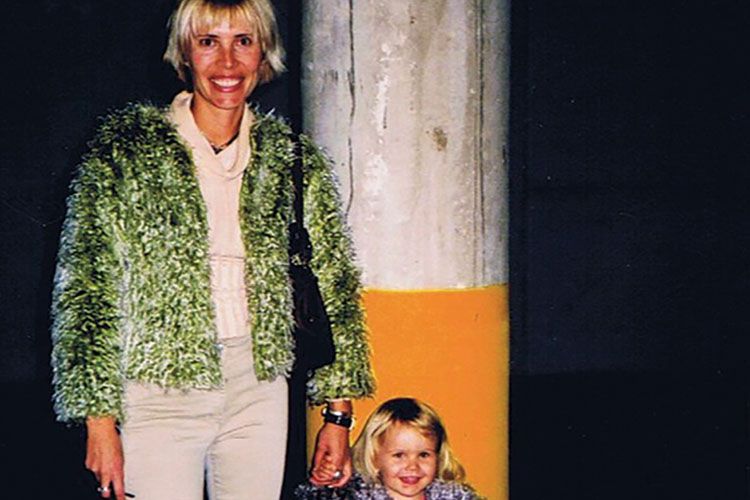 PICTURED ABOVE:  Senior Luiza Gruntmane, pictured as a toddler, modeled for ZAZA Couture, created by her mother Tereze, Luiza now works for her mother’s company during the summer.// Photo courtesy of Luiza Gruntmane

A girl’s mother can be her best friend, her workout partner, her biggest supporter and, perhaps, her business partner. These three mother-daughter teams have worked together to create thriving companies, specializing in fashion and home decor.

Senior Luiza Gruntmane’s mother, Tereze Gruntmane, founded children’s wear company ZAZA Couture in 2002. Tereze grew up in the Soviet Union, where, to her, the garments were “bland and pale.”

“I never saw orange, lime or fuchsia shades around me, except outside in the flowers and nature, like the sunset,” Tereze said. “I think I just needed to materialize my absence of color and I chose children’s clothing, because you could have so much creative freedom and fun designing with color.”

As a child, Luiza modeled for ZAZA, and when she outgrew the clothing, she helped Tereze pick out fabrics in Paris. Now, she helps her mother in the summers by packing boxes, creating invoices, helping with photo shoots and shipping items to stores. Luiza’s sister and alumna Marta Gruntmane ‘08 also helped Tereze with ZAZA during the summers when she was still in high school.

Tereze enjoys working with both of her daughters, and hopes that they have learned both business and life skills from ZAZA, such as knowing different ways to approach problems.

“I would never blame anyone, because I also make mistakes, and I would not want anyone yelling at me,” Tereze said. “So, I have created an environment where everyone is free to add their own opinion and only together we can tackle important issues.”

ZAZA is Tereze’s full-time job. She likes to work according to her own schedule, which stems from her admiration of her own mother’s flexibility with her work.

“When I was picking out my profession, one of the major factors was that I did not wanted to have a nine to five job,” Tereze said. “My mom was a freelance artist and while other moms had real jobs, I always admired my mom, who was able to slowly sip her morning coffee, and then take on work on her own terms.”

Tereze has expanded her business with a clothing line for babies, Roki & Zoi; a women’s line, ZAZA Couture por la Femme; and a line of linen products, 1924 Linens & More.

Junior Sawyer Bannister and her mother, Kim Bannister, worked together to start the Sawyer Collection when Sawyer was in eighth grade. Their brand is a lucite home decor line inspired by the vintage furnishings of the ‘60s and ‘70s and the duo’s love for the sea and travel, with pieces such as bowls, pillars, bookends and tabletop accessories.

This mother daughter duo was first inspired to start the business when they were decorating their new home last year. Kim took Sawyer and her brother to a vintage store in Venice Beach, California, and allowed them each to pick out one item under $25.

“We found little treasures, but Sawyer and I left with the desire to find some unique bookends— something with a story,” Kim said. “It was on this trip we dreamt up our concept of capturing moments in time as well as filling a need for striking and versatile, high quality lucite home decor statements.”

Each piece in the collection takes around two days to make, and no piece is identical. Sawyer and Kim have designed these items to be “handcrafted sculptures and objects d’art as luxury and quality statements for the home,” according to Kim.

Right now, Sawyer does most of her work on the weekends due to her school and extracurricular schedule and is also able to focus on the company more during the summer. Yet the business still depends on their joint effort, as the duo always consults one another about design ideas and asks for opinions.

Junior Avery Bowers, mother Shannon Bowers and grandmother Pamela Pierce collaborate on MILIEU, a shelter and lifestyle magazine founded by Pierce, a former interior designer. She loved the interior design industry but was both looking for change and felt that there was a definite need for a new home and garden magazine. The first issue was printed in the fall of 2013.

The goal of MILIEU is to both look to the future and honor the past. Pierce wishes to feature new and current home designs and trends but feels that it is also necessary to remembering the past, because to her, the past is what dictates design.

Both Pierce and Shannon draw inspiration from their experience in interior design.

“We operate with a small but mighty team and produce a beautiful and inspiring quarterly magazine,” Shannon said. “As an interior designer myself, MILIEU is one of my favorite sources of inspiration. I save my issues and review them often for inspiration and resources.”

As Editor-in-Chief, Shannon is Editor-at-Large and Avery is the social media director. The magazine is Pierce’s full-time job, and Shannon helps out part-time, due to her current job as an interior designer. Avery’s job entails managing social media accounts ( milieumag on Instagram and @MilieuMagazine on Facebook) and contributing ideas.

Although MILIEU is based out of Houston, which means that Avery and Shannon cannot work with Pierce much of the time, both believe that the magazine has brought them closer together.

“Some of my fondest memories include traveling with [Pierce] and Avery for photo shoots and adventures around the country and abroad,” Shannon said. “A highlight would be traveling to LA with Avery and producing a Mark Sikes photo shoot a couple of years ago.”

MILIEU can be found at Whole Foods, Barnes and Nobles and all major airports across the United States and abroad. Pierce hopes to expand to European markets this year.