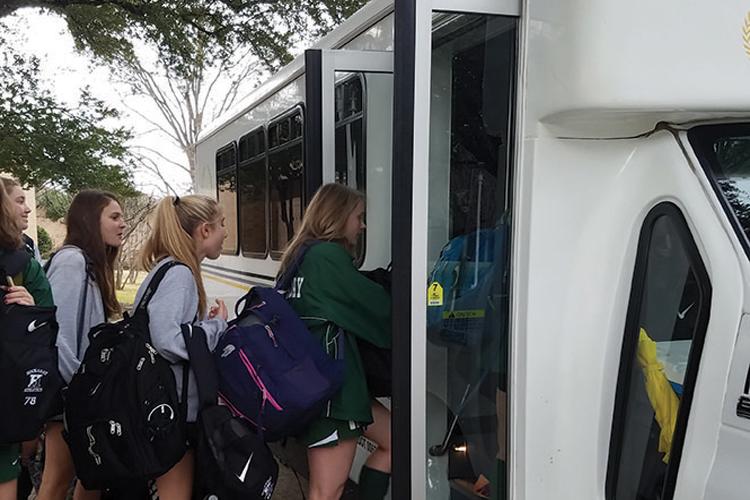 PICTURED ABOVE: The junior varsity soccer team boards the bus to their weekly away game on Feb 2. Photo by Jenny Choi.

For many years, Hockaday students have traveled to sports games or on field trips using small white buses displaying the green Hockaday School logo. Now, the students are traveling incognito.

Late in 2017, a Transportation Safety and Security Task Force established by Dr. Karen Warren Coleman, Eugene McDermott Head of School, met to review the Hockaday bus fleet to ensure that all transportation safety standards were met. Through this investigation made up of Hockaday faculty and staff, it was revealed that smaller buses better met the needs of the School, since most group trips do not require a large bus. It soon became evident that hiring certified multi-function school activity buses were the safest vehicles to transport students as an alternative to the School’s aging fleet.

Hockaday Director of Finance and Human Resources Whitney Johnson was designated to facilitate a task force focused on the creation of an alternative options to the antiquated green-and-white buses.

“Based on the information we had, we grounded our current fleet while the Task Force investigated the certification and use of MFSAB vehicles,” Johnson said.

Members of the Transportation Safety and Security Task Force have been working since early January to sell and trade in the outdated buses used almost daily for away games, boarding excursions, and various field trips. Johnson, in particular, has had a key role in the exchanging and selling of the buses, as well as financially handling the situation.

The whole fleet has been replaced with eight 14-passenger buses as of the beginning of January, and have since been used for a large variety of excursions.

According to Johnson, the renting and trading of the new buses has not had a noticeable financial impact on the School, and the transition has been smooth thus far.

“The School has a strong capital replacement fund which is specifically designed and budgeted for replacement of the fleet, among other things” Johnson said. “While the timing of replacement was expedited in this instance, those funds were already reserved for this type of spending.”

Johnson said that the Hockaday branding will be added to the busses before next fall, so “they won’t be plain white ‘incognito’ forever.”

Some students, however, haven’t noticed a major difference in the replacement of the Hockaday buses.

“I knew they were getting rid of the old buses, so I was kind of expecting a major change. But you can’t really tell the difference. They are pretty much the same size, but they are just plain white now,” said Elly O’Brien, an athlete on both the field hockey and soccer teams.

The one downside to the new buses that O’Brien and her teammates have noticed is the lack of an auxiliary cord, which previously allowed the team to bond over their unique team playlist.