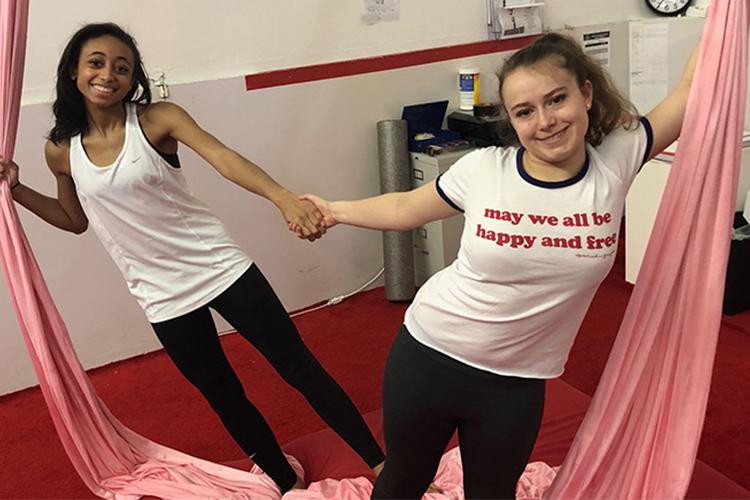 They wrap themselves in aerial silks, hanging and swinging, occasionally dropping themselves from the air by rolling out the silk. With pointed toes and elegant arms, they defy gravity while practicing their newly learned tricks.

For seniors Kaleigh Beacham and Emily Baschab, this is their senior independent study.

“[Aerial silks] were really just something new. It was exciting to try a new workout, and also kind of gratifying because I thought that I wouldn’t be very good at it, but we actually found ourselves having fun and keeping up with the rest of the class,” Beacham said.

All seniors, like Beacham and Baschab, set fitness and wellness goals for their senior independent study. But this year, the program has changed.

Baschab and Beacham wanted to improve their body strength and Calhoun, their PE advisor, mentioned silks during their meeting. Beacham especially wanted to try new routines to help her get ready for track season, and ended up finding a beginners silk class to attend with Baschab.

“Silks helps a lot with every part of the body, but especially core and legs,” Beacham said.

Senior independent study has been around for the past 10 to 15 years. The Physical Education department, including Calhoun, discussed its importance and decided to place it into the Health IV curriculum.

Previously in this course, seniors were assigned to a P.E. advisor, one of the many faculty members from the Upper School P.E. & Wellness department, and planed their goals regarding fitness and wellness.

However, 14 different advisors trying to get across the same message proved to be a challenge. Calhoun proposed that perhaps having one advisor would be more consistent. Thus, she became the only PE advisor for the senior independent study course.

“Everybody does something a little differently being a PE advisor, and having one voice will tell the same message,” Calhoun said.

And this works well for Calhoun. Since she is also the Form IV Dean, she has easy access to the seniors, especially with her office being located in the Senior Commons. She believes that being the form dean for the senior class and the fact that the students know her well will also lead to a good takeaway for the students.

“[Calhoun] is super accessible. She is right there in the commons, and I think it would be a lot easier than having a bunch of different senior independent study advisors. I really like the new way they are doing it,” Beacham said.

The goal of senior independent study is for seniors to slowly transition from being taught by a PE coach to knowing and planning exercise routines on their own. From this unique experience, Baschab learned to go beyond her limits.

“It was interesting to open yourself to new horizons and be like ‘yes, I can do something interesting, like a silks class,’” Baschab said.

The P.E. advisor change was just a step that was part of a bigger change. During the 2016-2017 school year, the P.E. department changed its schedule from a quarter to a semester system

In 2004, Hockaday introduced a block rotation to the schedule. All departments, except for the P.E. Department, adopted to the new system by having classes based on semesters. PE and Health courses continued to operate under quarters.

The quarter system brought many issues, both with scheduling and academics. Because PE was not in alignment with any other subjects, scheduling was extremely difficult.

Six weeks was not enough to get in-depth on a topic, and by the time the students began to open up in conversations, the quarter was already over. Having a quarter of health every year made it hard for students to reconnect to previous topics. Calhoun believes that the curriculum lacked continuity and could be improved upon.

The talks among the PE department regarding the schedule have been going on for about five years. At the end of the 2015-16 school year, the importance of bringing in a new schedule for the department was emphasized. The plan began to go into effect last year and will be fully implemented next year.

“Whenever you make any changes in any courses, there are always going to be adjustments that need to be made. Teachers and students are all working through [the change],” PE Coordinator A.D. Ebeniro said.

Calhoun projects that this change will impact both P.E. coaches and students in a positive way.

“As we work on these developments, I am really excited about some of the thing’s we are able to add that we haven’t had time to really do before. I think there will be things that students find interesting and important,” Calhoun said.

For senior health classes, rather than having a quarter of self-defense and two quarters of senior independent study, they will be combined into one semester. Director of Health & Physical Education Jennifer Johnson said that the embedded independent studies will have the same effect as having two quarters.

“We will be learning the concepts. We will not be working out in class, it will be more talking through the ideas and making a plan,” Johnson said.

The main purpose of the independent studies remains intact, and the rising seniors will still learn time management and the appropriate health care skills that they will need in college.

“When I go to college, I feel like I am definitely more prepared and I have better habits as far as working out on a regular bases or trying new things like this, It won’t be something that is unfamiliar and that I wouldn’t be comfortable doing,” Baschab said.