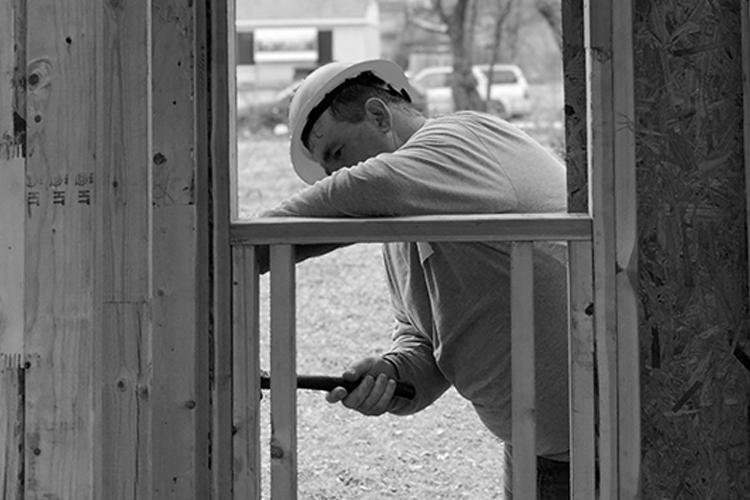 PICTURED ABOVE: 01. On the second day of the build, senior Emily Fuller’s father, Je Fuller, hammers the side of the house. 02. Senior and Habitat for Humanity Core Volunteer Fernanda Sua?rez uses her upper body strength to help lift the trusses onto the roof of the house. 03. Hard hat in place, junior Shea Castleman prepares to reach and work on the higher areas of the house. 04. Willing to climb to any height, Form II Dean, Habitat for Humanity Core Volunteer and Fernanda’s mother, Alejandra Sua?rez works with her non-injured hand as she balances on the work-in-progress roof.

Hammer hanging from his tool belt and hard hat secured on his head, Abdel Ahmed climbs up a shaky ladder onto the slanted wooden boards that would eventually become the roof to his future home. After weeks of hard work Ahmed, his wife, his mother and his three kids will move into a house they helped build alongside dozens of other Habitat for Humanity volunteers.

To continue their tradition, members of the Hockaday and St. Mark’s communities will build their 12th house with Habitat for Humanity this year, allowing Ahmed and his family to own their first home.

Ahmed grew up in Sudan and met his wife in Egypt. The couple then moved to Boise, Idaho where they lived until they decided to relocate to Dallas in order to take advantage of the many job opportunities that the city had to offer. Ahmed now works two jobs, one in housekeeping at the Brookhollow Golf Club and another caring for the elderly through Angel Homecare.

After hearing about Habitat through a friend, Ahmed and his wife decided to apply in hopes of having a home for their three children.

“After me and my wife filled out the application it took about one year to hear back,” Ahmed said. “We are very excited because this is our first home and it has a backyard for our kids to play in.”

Ahmed and his family will continue to work alongside a dedicated group of students, parents and teachers, including Form II Dean and Spanish teacher Alejandra Sua?rez, to build their home.

“It’s very uplifting to see the family there giving their very best,” Alejandra said. “I am also inspired by the students’ willingness to work hard, suffer through the cold and do things that put them out of their comfort zone.”

Alejandra along with her daughter, senior Fernanda Sua?rez, spent this past summer investing their time in learning everything they could about building a house in order to become Habitat for Humanity core volunteers, who help lead the rest of the crew during builds.

“I loved habitat from first time that I went and I knew that I wanted to take more of a leadership role,” Fernanda said. “I felt like I should know more about how to build a house.”

Similar to Ahmed who has never been involved in the construction of a house, Fernanda enjoys learning new things each time she goes out for a build. Whether it’s nailing in shingles, hammering on the blue board or sliding the trusses on to the roof, each day brings a different task.

Alejandra always ends the eight hour work day with a picture of the house to track the progress made from the previous build. This allows her and Fernanda to reflect on each day and how far they’ve come in helping create someone’s home.

“I get a lot more than what I give,” Alejandra said.

At the end of the day, Alejandra and Fernanda value the time spent working together and alongside the future homeowners.

“Seeing that family working and knowing in the end that they are going to have a home ignites my passion for helping,” Alejandra said. “It makes me more conscientious of how hard work leads you to great things.”

The last build will take place on March 3. A dedication will also be held on this day to celebrate the family’s move into their new home.