Not in Love with “Love, Simon” 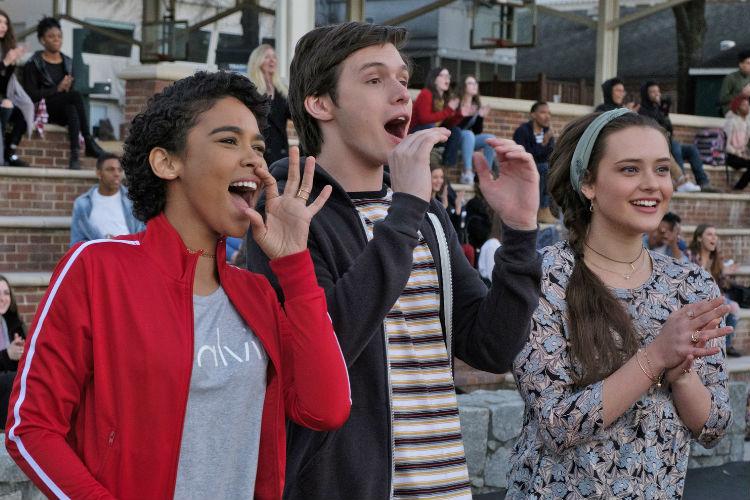 The review below contains spoilers. Views expressed are of the author’s.

Many were ecstatic when it was announced that Becky Albertalli’s novel, Simon vs. the Homo Sapiens Agenda, was being turned into a movie. Here was a charming story about a typical teenage romance that also dealt with the trials of being a LGBT+ kid, and to many, this felt like a step in the right direction towards the normalization of LGBT+ relationships.

Nick Robinson, featured in “Everything, Everything,” plays 17-year-old Simon Spier, a teenager who lives a fairly normal life, except he has “one huge ass secret”– he’s gay. Spier juggles trying to maintain his life of friends, family and theater, while secretly messaging an anonymous student at his school, whom he has fallen for. But he is blackmailed by one of his classmates who read his emails, who threatens to out him if Spier doesn’t help him win the affection of one of Spier’s friends.

Released on Mar. 16, “Love, Simon” has drawn a huge fan base due to its witty advertising and seemingly revolutionary plot. Up and coming actors and actresses like Robinson and Katherine Langford, the star of the Netflix series “13 Reasons Why,” bring a young, enigmatic air to the movie.

However, the movie itself is nothing special. Unmemorable, even. Spier is your typical artsy main character– him and his friends “drink way too much iced coffee while gorging on carbs, so [he’s] just like you.” There isn’t any depth to the characters, and at times, the movie is a little boring. It didn’t translate the charm of Albertalli’s novel very well because it left out some of the key scenes which made the book funny and unique. Some of the jokes were awkward at times, and it was obvious that the director was trying too hard to be “relatable” in order to appeal to a teenage audience.

However, one of my main qualms with “Love, Simon” is the director’s choice in casting. The cast is predominantly white, with some African-American characters, which may seem diverse. But it’s glaringly obvious that this is a weak attempt at inclusivity– why try and include non-white characters if you’re not going to include characters of all races and ethnicities?

The only thing that sets this movie apart from the hundreds of thousands of already existing teenage romance films is the fact that it brings to light the struggles of being a LGBT+ teen in today’s world. It portrays the hard process of accepting yourself and coming out, which has sparked gratitude from the LGBT+ community. Celebrities such as Neil Patrick Harris and Kristen Bell have bought out theaters in order to show free screenings of “Love, Simon.”

To see yourself reflected on the big screen is a huge deal. “Love, Simon” is paving the way for representation of LGBT+ characters. Robinson’s own brother came out to him after finding out that Robinson was acting in the film, and in the theater I went to, the sounds of sniffling and applause were predominant. Obviously, this movie is inspirational and important to the LGBT+ community, who has yet to see the levels of inclusion and representation that others have.

All in all, “Love, Simon” is a normal, somewhat stereotypical story of a high schooler falling in love. It isn’t being hyped up due to an outstanding cast or gorgeous cinematography. Its charm is that it is an ordinary movie with ordinary characters, but it also happens to highlight the difficult path to acceptance as a LGBT+ person. Hopefully, it will pave the way for more movies with LGBT+ characters, since representation does matter. But I also hope that these movies will have storylines that aren’t so played out.