Alumni On the Scene at HAARTS Assembly 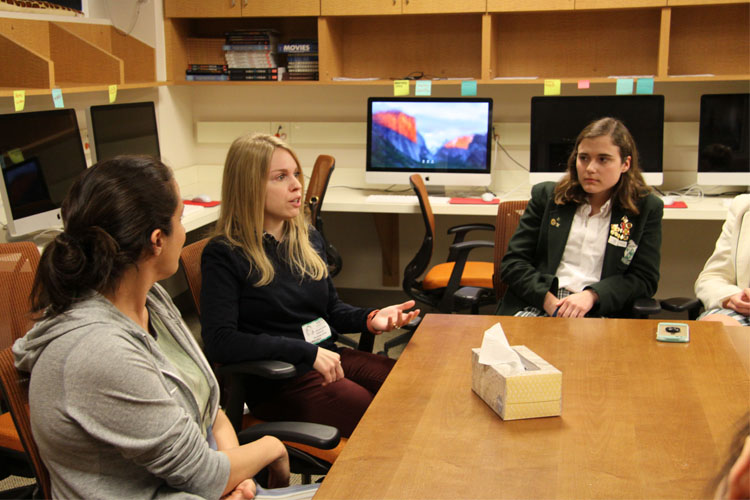 PICTURED ABOVE: Athena Wickham (left) and Sasha Stewart (center) talk to the Advanced Film class after the HAARTS assembly.

Charlotte Carter ‘99, the Hockaday Alumni Association’s Vice President of Communications and Chair of the HAARTS program, began creating one of the Upper School’s favorite assemblies in May 2017 when her position began. During the summer, Carter and her committee of 16-20 alumni to determine a theme never before used in the assembly’s previous 14 years.

The theme had to engage both Upper School students and alumni attending the event the night before. To ensure their ideas resonated with Upper School students, Carter and the committee bounced their ideas off recent Hockaday graduates interning in the Development Office. They decided to shine a light on television and movies during this year’s HAARTS assembly but focus on alumni not shown on screen.

“With the special focus on being about “Behind the Scenes” rather than actors in front of the camera, it explored a dimension that many people don’t often think of in that industry but that certainly deserves some time in the spotlight,” Carter said.

Carter then decided on the speakers featured at the assembly, a group of alumnae from various jobs behind the camera and different graduation years. The panelists were Barbara Jaffe ‘69, the Executive Vice President of Advanced Technology Operations at HBO, Suki Hawley ‘87, Director, Editor and Documentary Filmmaker at RUMUR Production Studio, Athena Wickham ‘98, Emmy-nominated producer of Westworld, and Sasha Stewart ‘05, television writer.

Jaffe worked at HBO for 33 years, from 1980 until she retired on December 31, 2013, and beginning as Regional Manager in the sales department. She eventually worked her way to the position of Executive Vice President of Advanced Technology Operations, where she managed engineers, businessmen and businesswomen that negotiated deals with satellite television companies and new technologies and managed projects. This allowed HBO to launch HBO HD, HBO on Demand and HBO Go

Now Jaffe and her husband live in Beaverkill Valley, located about 120 miles northwest of New York City. They enjoy golfing, fly fishing and doing whatever they want whenever they want.

“I am the poster child for the happiest retired person on the planet.” Jaffe said.

Jaffe loved speaking at the assembly as it reminded her of how special Hockaday is. She was also able to meet the other prominent women in the film industry, none of whom she had ever met before.

While she had another commitment after lunch, Wickham and Stewart visited Advanced Filmmaking during G-Period after the assembly to offer advice to Hockaday film students. Topics ranged from job interviews to demanding respect in the workplace.

Sophomore filmmaker Abby O’Brien really enjoyed both the assembly and the classroom discussion and learned many tips on how to survive in the film industry.

“The assembly and class visit showed me that asserting myself and asking for more help while making films is allowed and that even the most professional, successful women are human,” O’Brien said.