Filmmakers of the Future: How Three Film Students are Paving Their Way to Success 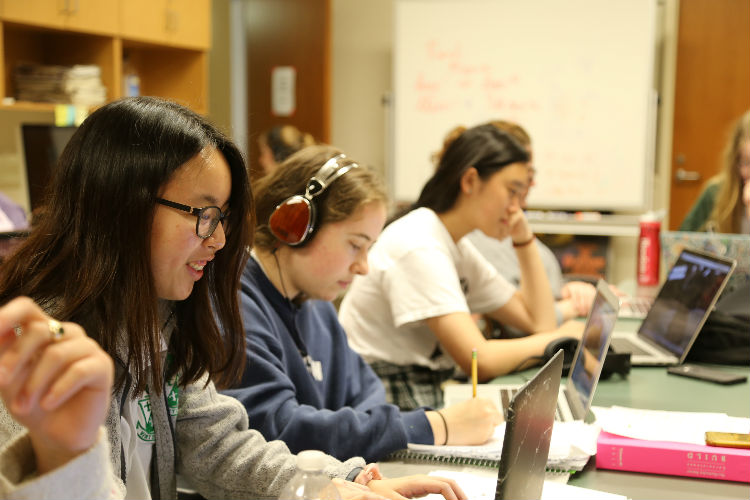 “My brother used to do film at Greenhill. I would always watch his short films that he made, and they were just brilliant—he’s so good, I love it for my brother,” Gilmour recalled with a beam.

Gilmour began pursuing her passion for film from this point forwards after gaining inspiration from those around her.

“His films inspired me to get into film because I thought it was so cool what he was doing, and that he could create something so powerful,” Gilmour said.

Gilmour is just one of many students involved in the Hockaday film program. The film department is known and loved locally within Hockaday for for their advanced work and sophisticated productions. However, their success is recognized outside of community as well: recently senior Grace Zhang and junior Emily Ma attended the Bechdel Film Festival for their production “ONE,” while Gilmour’s short film, “Ukiyo” screened at the San Luis Obispo International Film Festival.

Although Ma and Zhang created their film “ONE” over a year ago, it is still receiving acclaim from renowned film festivals. For instance, last year their film screened at the well-known South by Southwest arts festival. More recently, however, the two, young filmmakers were reached out to by the executive director of Bechdel Films, Cressandra Thibodeaux, and asked to participate in a panel of speakers which was to take place during the festival. “ONE” subsequently screened in the following days.

The Bechdel Film Festival is unique in the sense films must meet particular criterion in order for their acceptance to be considered. Known as the Bechdel Test, the three requirements that a film must pass are: It must have at least two female characters, they must both have names and they must talk to each other about something other than a man.

According to the Bechdel Films website, “the test is not a measure of how good or ‘feminist’ a film is but it does highlight just how male-dominated cinema really is.”

After being reached out to by Thibodeaux, Zhang and Ma attended the festival on Saturday, Feb. 17 in order to join the panel discussion. The panel focused on “Producing Your Independent Film,” where they were able to tackle larger issues such as fair hiring practices, the male privilege and budgeting for productions.

“We talked about frat boys with drones. So just the rich frat boy who always gets the best equipment—great cameras, great drone footage—and how that kind of sucks for the rest of the class because not everybody gets access to that. There is this white, rich male privilege going on,” Zhang said.

A few days after the panel, on Feb. 21, their film screened at the festival.

In addition to this, Gilmour’s short film, “Ukiyo” was accepted into the San Luis Obispo International Film Festival, where is screened the week of Mar. 13.

Gilmour submitted her film in Jan. 2018 under the category of “Filmmakers of Tomorrow,” which specifically targeted younger filmmakers.

She originally created the idea after reading a novel in French class last year.

“[Ukiyo] was inspired by Le Petit Prince,” Gilmour said. “The idea in the film is that through dreams and imagination, you can escape the monotony of day to day life.”

Ultimately, these young filmmakers work to inspire their audiences by fabricating stories which, above all else, are relatable to others.

“My ultimate goal in filmmaking it to have people resonate with my story, so they don’t feel like they are the only one in the world struggling,” Ma said.