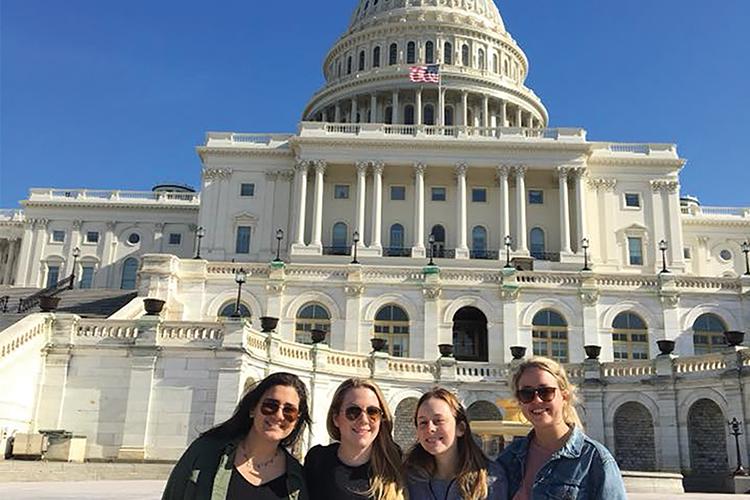 University of Georgia junior Rachel Robinson ‘15 enjoys sightseeing in D.C. during her free time from her lobbying internship at Holland and Knight. Photo provided by Rachel Robinson.

Three years ago, the members of Hockaday’s Class of 2015 walked across Graduation Terrace, completing their time at Hockaday. Now, the no longer teenaged group of 120 are finishing their junior year in colleges and universities across the world. Some are even entering the workforce. Whether it be part of their study abroad program or a requirement of their major, alumnae, including Catherine Kirby ‘15, Rachel Robinson ‘15 and Morgan Hurst ‘15, are interning in addition to their regular coursework.
Catherine Kirby

Kirby, a political science major at Rice University, is currently studying abroad in London and taking classes as an associate student at the London School of Economics. While her curriculum does not require that she complete an internship during her time at Rice, Kirby, looking to enhance her semester abroad, opted to work during her time in London.

“I wanted to make an internship a priority for my study abroad because it’s a really good way of understanding people’s culture if you actuallyworkwithpeoplefromthatcountry versus if you’re abroad and just studying with other exchange students,” Kirby said.

After applying for and being admitted to Rice University’s Hanszen Society Scholars Program, Kirby was placed as an intern on the Transport Committee of the House of Commons, the lower legislative house of the United Kingdom’s Parliament.

Working alongside 11 Members of Parliament from different political parties, Kirby’s duties center around researching and investigating transportation-related inquiries into the House of Commons.

“Work is structured in our committee based on inquiries, so those are us investigating different things whether it’s the Volkswagen emissions scandal to building another runway at [Heathrow International Airport], and we also have one on rail investments,” she said.

Along with hearing evidence and researching inquiries, Kirby is crafting her own inquiry to present to her committee.

“I‘ve been working on my own proposal for an inquiry into freight. Right now I’m working on proposing a terms of reference that we’ll take to our committee and we’ll ask them to approve it and we’ll begin to hear evidence,” Kirby said.

On top of working with the House of Commons’ Transport Committee Monday through Wednesday, Kirby also completes schoolwork from her classes at LSE, where she is studying public policy, as well as Parliament and politics alongside other Rice students in her program. After her semester in London with the Transport Committee, she will write both a detailed internship reflection and a dissertation.

While Kirby’s career aspirations center mostly around politics as opposed to policy- making, her time on committee in the House of Commons has contributed to her understanding of government systems as a whole.

“The policy area isn’t exactly my favorite area, but it’s really interesting to get the comparative perspective,” Kirby said. “I think that working on this committee has given me a lot of things to consider about America and how our political system works and things they can do better.”

Like Kirby, Rachel Robinson ’15 is interning in the political sphere in her junior year. Robinson attends the University of Georgia as a political science and international affairs major. This semester, she is living in Washington, D.C. and interning at Holland and Knight, a national law firm whose D.C. branch serves as a lobbying firm.

While the University of Georgia did not require that Robinson obtain an internship during her time in college, the idea of hands- on learning is encouraged.

“At Georgia, you can get some sort of experiential learning, whether that be a community service project you can get credit for, or an internship, or shadowing or research,” Robinson said.

After applying for the study abroad program and for her internship at Holland and Knight, Robinson was accepted in May, along with 33 of her classmates. As a Public Policy and Regulation intern at the lobbying firm, Robinson’s work is focused on researching and drafting memos to clients who have stake in legislation according to the movement of bills through the legislature.

“The firm represents a bunch of different clients and make sure that their voices are heard by the President and by Congress, whether they want funding for something or want certain language put in or taken out of a bill,” Robinson said.

Besides her daily client communications and research, Robinson was able to prepare for and attend a meeting on the Hill earlier this semester.

Accompanying a company from Georgia, Robinson traveled to the legislature to meet with congressional staffers about her client’s cause.

“It was so cool to hear the people that were so passionate about their cause and I also got to meet one of the congressmen at the end,” Robinson said.

Robinson, like Kirby, is taking classes this semester in addition to her 9-to-5 job at Holland and Knight. In the University of Georgia’s Government Relations building, Robinson attends a D.C.-centered seminar course as well as a class in Israel-U.S. relations.

Before living in D.C. and working at Holland and Knight, Robinson’s post-graduate plans were to apply to and attend law school directly after college. Her current internship, however, has changed her career aspirations.

“Now that I’ve done it, I really like the lobbying aspect, and I wouldn’t want it to be my longtime career, but I don’t think I’ll go straight to law school and I’ll work for a couple years doing something similar,” Robinson said.

While Robinson is not necessarily studying abroad as she is still living in the United States, she believes that her time in the workforce has proven to be just as valuable in the States, and urges that other students take this opportunity.

“Even if you’re just going to get a job or do a program in your city, I think it’s a great experience. It’s a lot of work and you won’t be taking as many classes, but the experience is worth it,” Robinson said.

Morgan Hurst ’15, a junior at Vanderbilt University, is taking Robinson’s advice and will be interning in the Nashville, Tennessee office of Court Appointed Special Advocates in the fall of her senior year. CASA is an advocacy organization with a mission of legally representing, supporting and mentoring children in the foster care system who otherwise may not have an adult in their lives.

A Human and Organizational Development major, Hurst has been studying organizational efficiency and interpersonal relations on the Community Leadership and Development track for the past three years.

Focused on hands-on and experiential learning, Vanderbilt’s HOD major requires that students complete and internship in one of their last three semesters at the university.

“Having an internship is one of the most fundamental parts of the major,” Hurst said.

Hurst used Vanderbilt’s HOD contact database in order to find the right internship for her, searching specifically for positions in non- profit organizations. Hurst has always valued volunteer work, a passion that she attributes to her 14-year Hockaday education.

“I think the emphasis on service that’s been instilled in me at Hockaday carries throughout my life now and is really the reason why I am so committed to serving the community,” Hurst said.

As the current president of Vanderbilt’s Kappa Alpha Theta chapter, Hurst was also drawn to interning at CASA, the sorority’s national philanthropy partner. CASA advocates must be 21 years old, so KAT participation in the organization has proven difficult, and Hurst hopes to strengthen the connection.

“I know there have to be more ways we can help, but nobody’s really dug into that, so considering me working there, I was thinking this would be a really good opportunity for me as President to find things Thetas could help with,” Hurst said.

At CASA, Hurst will work as an intern to the nine staff members in the office, working specifically in the case intake department and fundraising. Like Kirby and Robinson, Hurst will manage a busy schedule, balancing classwork from her Monday morning seminar course and 9-to-5 work at CASA five days per week.

Throughout her work at CASA, Hurst will also be crafting her final project for the internship program: a functional plan designed to enhance the efficiency of CASA. Using the skills they have learned at Vanderbilt, HOD students are tasked with identifying a weak spot in their organization or company and creating a plan to alleviate that issue.

“You set it up to where once you leave, [your project] will be fully functioning and you’ll have impacted the organization for the better,” Hurst said.

Kirby, Robinson and Hurst, although they are all committed to unique, varying internships, all agree real world work experience during college has helped to broaden their horizons and to expand their career goals.

“If you don’t do something like this, you’re sort of stuck in this college bubble,” Robinson said.