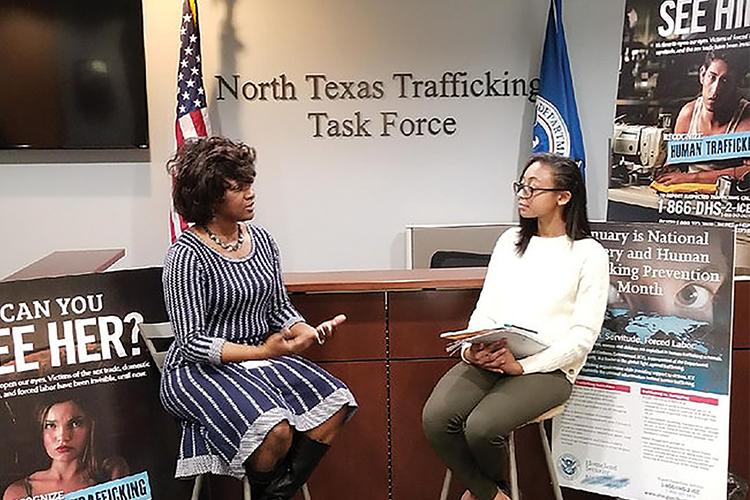 When most of us think of Girl Scouts, the names “Thin Mints” or “Samoas” may come to mind. However, senior Kaleigh Beacham’s involvement in the organization transcends selling cookies. As a Girl Scout, Beacham delves deep into the issue of human trafficking.

Beacham started as a Brownie in third grade, the group name for the youngest girls taking part in Girl Scouts, and has advanced through the levels of the organization for the past 10 years. She is now pursuing her Gold Award, the highest award a Girl Scout can receive.

“You are involved in community service at all stages of Girl Scouts, but the Gold Award is for you to take your own community initiative. You pick an issue you care about and create your own sustainable solution,” Beacham said.

“It just really scared me that that happens to people my age who I come in contact with. It’s also something that you don’t hear about because it’s not a topic that is fun to talk about and it’s one of those crimes that is hidden, not like something you see like a homicide or something that you can detect immediately,” Beacham said. “It’s hard to imagine someone you’re close to being in that situation. I don’t think we want to think about it.”

To tackle this issue, and because of her passion for writing and her belief that a website was the best way to educate people on the issue, Beacham created braketrafficking.com, a website “dedicated to education about and prevention of human trafficking, with a special focus on kids and teens in the Dallas, Texas area.”

“You can never really tell when it’s going on or the extent of it. The best way to fight something like that where you do not really know the enemy is to learn about it,” Beacham said.

But Beacham is not alone, her mother and troop leader, Kelly Beacham, and fellow troop member senior Emily Stein joined her in her efforts.

“No matter what you choose for your Gold Award, you are making a lasting impact on your community,” Stein said.

As her troop leader, Kelly Beacham works as the volunteer coordinator for the project.

“I was also there for emotional support along the way, which was important because the Gold Award is such a big project,” Beacham said.

She has also partnered with the Department of Homeland Security; Texas Health Resources; Traffick911, a non-profit against human trafficking; Mosaic Family Services, a shelter for survivors of human rights abuses and Destiny’s House, a youth center for trafficking survivors.

Beacham decided to gather information for her website from these organizations because they come in direct contact with the issue.

Part of her heavy research and fact checking included conducting interviews with experts. She interviewed a Victim Assistant Specialist at the Department of Homeland Security, who works with trafficking survivors from the point they are rescued until their healing process is done.

“I chose to interview the Victim Assistant Specialist because she is the first line that victims see when they are rescued,” Beacham said. “I thought that she could give a lot of insight into what these people are thinking, how they got involved in that situation and what to look for in a trafficking victim.”

Beacham also took a class at Texas Health Resources on Jan. 9 that was geared towards health professionals to look for signs of trafficking in their patients.

Through this experience, she learned that “you never know when a victim will have the opportunity to be rescued so you always have to be able to look out for it. Anyone can be a savior in that sense.”

Her website contains detailed information on the issue including what it is, how to spot it and more, as well as victim resources.

Beacham stresses the importance of being able to recognize the signs, which are detailed on the site.

“When I was talking to my project advisory who works at the DHS she mentioned that oftentimes a person’s peers or classmates are more able to recognize the signs of trafficking than a teacher or an adult so it just makes it all the more important that young people know about this topic too. Kids need to learn ways to recognize and protect themselves,” Beacham said.

To bring her project to a close, Beacham organized a screening of the documentary “The Long Night” on March 4 at Studio Movie Grill. The movie session was followed by a question and answer session from Traffick911 and the Department of Homeland Security.

She was assisted at the event by youth volunteers from Hockaday and St. Mark’s as well as her mother, father and aunts. The screening raised money for Traffick911 and Destiny’s House, and all guests were given goodie bags containing resources they can give to vulnerable people.

Although the screening was the final event, Beacham hopes to continue updating her site in college and leave an impact on Girl Scouts by making human trafficking part of the curriculum for Girl Scouts meetings and equip group leaders with knowledge because they work with young girls.

Her troop leader is impressed with the impact Beacham’s project has had.

“To me, the most impactful part of her project was that she empowered others to act. Throughout her website and movie screening, Kaleigh showed others that everyone has a place in the movement against human trafficking, and that intervention is possible at so many points,” she said.

“You don’t have to be a police officer or work at a shelter to help with this issue. Having the knowledge to recognize trafficking and help educate others and protect them is a part of being a responsible member of the community. To be able to get rid of trafficking we have to know about it, and it is our responsibility to know,” Beacham said.