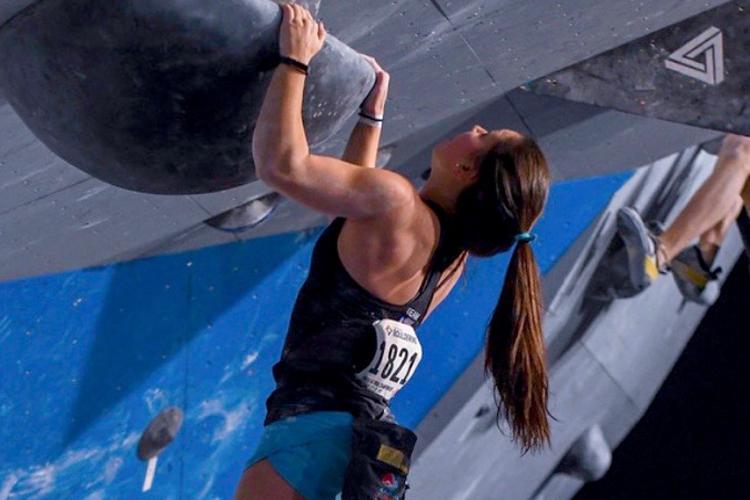 Whether climbing a tree or tumbling across their yard, senior Katie Vanesko and freshman Sarah Kate Ashton left their childhood hobbies behind after feeling the adrenaline rush of rock climbing. The pastime originated in the early 19th century but competitive climbing didn’t emerge until the 1980s. Almost 40 years after this shift, Vanesko and Ashton have dedicated their time, their bodies and their minds to perfecting their climbing technique.

After her two hour warm-up, freshman Sarah Kate Ashton feels her heart rate increase as she waits for several minutes with her back facing a foreign rocky course she must learn to navigate. When Ashton turns around and sees her challenge for the first time, she feels determined to face it head on.

Ashton competed at the U.S.A. Climbing Bouldering Youth National Championship in Salt Lake City, Utah from Feb. 9 to 11 and received first place in the 13 to 15 age group. Due to her success, Ashton will have the opportunity to compete for the United States at the International Federation of Sport Climbing World Championship in Russia this summer.

“My favorite experience was this last competition because I was competing against the top 50 rock climbers in the country,” Ashton said. “To come out on top of all those girls was crazy.”

Ashton worked to build up her skills for years before competing at the national level. Her passion for rock climbing began with her childhood love of climbing trees. Eventually Ashton’s dad brought her to a climbing gym, and at the age of nine, her career in the sport took off.

“One of the coaches came up to me and asked if I wanted to try out for the team,” Ashton said. “That was six years ago and I have been competing ever since.”

Ben Jensen has trained Ashton for two and half years and has enjoyed watching her grow and improve as a climber. Although As- ton broke her arm when she fell out of a tree before nationals three years ago, Jensen has worked with Ashton to overcome her injury and win this year’s national competition.

“It was really cool to see her come from a point where she couldn’t do anything climbing related, and then working to get her strength back, get her technique back, basically pull a full 360,” Jensen said.

As a member of Lone Star Climbing, Ashton trains in Frisco around five days a week along with participating in workouts with her coaches in a gym in Dallas. Her training consists of four minute drills to prepare for nationals, a competition in which climbers try to reach the highest point on a course in four minutes. Ashton admits that one of her biggest challenges has been learning how to compete in a high pressure setting.

“It’s really stressful when you’re up there in front of all the people on a big stage where they set up the wall,” Ashton said. “You have to learn how to not get flustered and not to freak out if you make a mistake.”

Ashton’s current goal is to qualify for the international competition in the other two disciplines of climbing: sport and speed.

In bouldering competitions, which take place between August and February, Ashton navigates routes 15 to 20 feet off the ground without a rope. Sport competitions consist of much higher climbs, as tall as 60 feet, but climbers are harnessed in. The third discipline, speed, takes place on a route that climbers have seen before and they are challenged with racing against the clock to complete it.

“I like to focus on my athlete’s own ambitions. I don’t like to put my own goals out there for them,” Jensen said. “I want them to self assess and set their own goals.”

Jensen praises Ashton for her motivation in all areas of her life. With Hockaday’s de- manding curriculum, Jensen has seen Ashton balance her academic responsibilities with her training.

“It’s not easy I can definitely tell but she makes it work and comes into practice with a smile on her face and is always there to work hard,” Jensen said.

Like Ashton, senior Katie Vanesko has also overcome many challenges to reach her level of expertise in rock climbing, which she began at age 11. After ending her gymnastics career, Vanesko found her passion for climbing and now spends over 10 hours a week training with Team Texas Rock Climbing, the first competitive climbing team created in the United

“I didn’t know it was a sport [back then] but one of the kids running a summer camp I attended asked me to meet his coach and come to a practice to check it out,” Vanesko said. “Then it just spiraled from there.”

At 14, Vanesko placed fifth in a national bouldering competition, missing an invitation to the USA Climbing team by one spot. After recovering from a repeated finger injury, first in 8th grade at an outdoor climbing area in El Paso and again in practice last spring, and spending a sophomore semester abroad in Switzerland, Vanesko continued her training and placed in the top 10 at the most recent national bouldering competition in Salt Lake City, Utah from Feb. 9 to 11. In the past, Vanesko has also placed top 10 in national competitions in the two other climbing disciplines: sport and speed.

Her coach, Kyle Clinkscales is excited to continue to train Vanesko to prepare for the national competition for rope climbing that will take place from July 12 to 15 in Atlanta, Georgia.

“She is a really awesome competitor,” Clinkscales said. “She’s smart, passionate and dedicated and she challenges herself.”

Vanesko travels with her team around once a month to explore outdoor climbs and new indoor facilities. She spends her summers preparing for nationals by training for about three months in Salt Lake City and a few days in Atlanta. Every year after competing in nationals, the team travels to the Red River Gorge in Kentucky to have two weeks of fun climbing in the outdoors.

“I really like the adrenaline rush,” Vanesko said. “There are times when I am actually in danger and sometimes I forget that, but I definitely like the part where you are outside and 100 feet off the ground.”

But the only thing that holds back Vane- sko at times is her state of mind. After she injured her finger, she couldn’t shake the fear that she would gain another injury every time she tackled a difficult move.

“When I first started climbing I had a really good mentality because coming out of gymnastics I thought nothing could phase me,” Vanesko said. “When I injured my finger, it was really hard to come back because every difficult move I made I thought about getting hurt again. It took me from freshman year to last year and this year to get out of that.”

Clinkscales has also worked with Vanesko to overcome the challenge of her size, with her petite figure and height of five feet two inches, when climbing by learning and practicing more unconventional strategies. The team trains at Summit Climbing gym in Carrollton, a facility that Clinkscales believes is one of the best training centers in the country.

“We built a facility that is very conducive to training at the national and international level,” Clinkscales said. “So for her it is a matter of learning how to climb with her feet barely on the wall and bringing them to her face. She has to be very flexible and very dynamic.”

Clinkscales admires Vanesko for her dedication to the sport, especially since it is her senior year.

“She’s awesome because she comes and trains like she’s a freshman. She really pushes herself,” Clinkscales said.