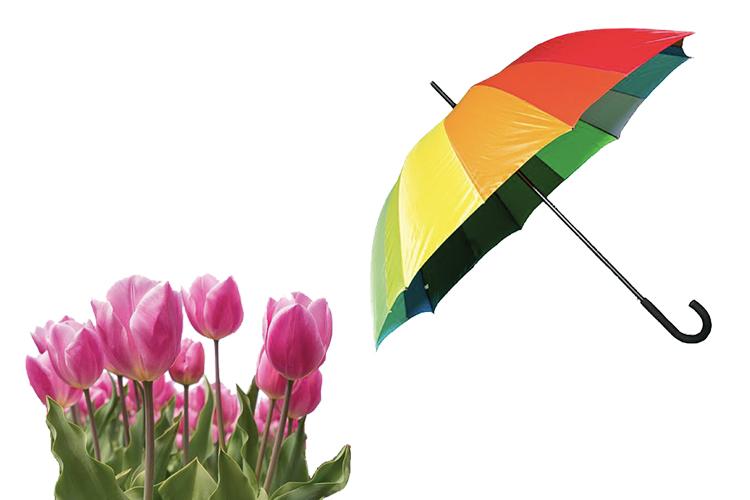 April Showers
by Mary Orsak
There is no greater day of the year than April 1. Aside from the antics of April Fool’s Day, this day welcomes my favorite month of the year. While January may introduce the new year, February may celebrate romantic love and the summer months may bring lazy days filled with popsicles and pools, no month has as much rain as April. You may not perceive inches of precipitation as a selling point, but hear me out.

More than a decade ago, the television scientist William Sanford Nye, more commonly known as Bill Nye the Science Guy, first introduced me to the mystical concept of the water cycle. In his dark laboratory stand-

ing beside a complex apparatus of tubes, thermometers and a seemingly gratuitous bicycle wheel, Nye explained how temperature, density and a touch of magic cooperated to produce the miracle of rain.

At a time in which I only surpassed four feet tall when standing upon my toes, the idea that every drop of water had undergone the cycle of evaporation, condensation and precipitation countless times seemed more fantastical than the tooth fairy.

However, through my experience with Hockaday Lower School Science, I learned not to question the almighty and omniscient Bill Nye. Thus, my healthy dose of skepticism metamorphosed into a profound admiration of rain, which I still retain today.

By the age of 10, the rebellious streak in me averted my fascination with the benign aspects of the hydrologic cycle to the dramatic: thunder and lightning. When asked to give a presentation on any science-related topic in our fourth-grade class, fellow senior Michelle Man- koff and I gave a riveting 20-minute rendition of the horrors of electric fields and lightning strikes. Although I have since lost the Power- point that Mankoff and I created for this project, I do remember that the first dozen slides were merely photos of thunderstorms with the occasional shot of an unlucky soul in the midst of lightning strike.

In Middle School, seventh-grade science teacher Margaret Cagle informed our class that an analysis of the air pressure could provide insight into the probability of any forthcoming rain. For the next few months, my favorite party trick involved asking people about the forecast only to provide my own prediction on the likelihood of any rain (of course, nine times out of 10 I was incorrect).

With each new shoe size, my understanding of rain has advanced, and even though I no longer question Nye’s explanation of the water cycle, I still retain a sense of awe any- time drops of precipitation barrel 20,000 feet toward the earth.

And when this rain comes, I simply cannot help rushing into the storm just to smell that sweet scent of petrichor, both a result of oils secreted by plants mingling with geosmin and other chemicals as well as the recombining of ozone molecules into nitric oxide. The symphony of thunder and rain crashing onto the roof provides the perfect bedtime melody. The puddles that form in the cracks of the sidewalk instantaneously transport me to the days in which splashing in the muddy water rivaled the most exhilarating roller coasters in the world.

So as spring showers begin to descend upon Dallas, I encourage you to ditch the umbrellas and to appreciate the magic of rain like a mesmerized 8-year-old child.
May Flowers
Katie O’Meara
As I lean on the fence of the softball dug- out, the sunlight beats into my eyes while the smell of freshly cut grass fills my nose. I glance behind my back to see the outline of the Hockaday greenhouse in the distance, filled with an infinite amount of flowers.

Spring has always been my favorite season. From the start of softball season to the end of the school year, the season brings the highlights of my year, especially with the scenery that comes with the pastel flowers growing in everyone’s front yards.

Since right before my sixth birthday, aptly on the Summer Solstice, I have played softball, a quintessential spring sport. Every year, I look forward to the first week of February when pre- season officially starts and I step back onto the dirt.

This year, in what is most likely my last year of playing softball, April Showers have hit Dallas early. For the majority of the month of February and early March, rain has pelted the field, leaving it unplayable.

With these early April Showers, our softball team was confined to the Lacerte Family Gymnasium. While this gym may be a good place to have basketball practice, the 84-foot- long court cannot replicate a 230-foot field measured from home plate to the centerfield fence. For me, one of the best parts of softball season is being outside with the sun in my eyes, knowing that my face is slowly turning crispy red as I once again forget to put on sunscreen. But when it’s raining, one of the most important parts of my school year is not the same.

Even with no actual rainfall, the heavy cumulus clouds that these April storms bring drop a blanket onto the metroplex. From darkness at noon to being unable to see while driving, rain is depressing. I can only tolerate this dreariness for a day at most, let alone a whole month of continuous rain. The only beneficial part of these April Showers is that they allow for May Flowers.

Besides the start of the softball season, the one day that I have looked forward to more than any other day at Hockaday is Commencement. From the long white dresses to the diplomas, the ceremony has always enthralled me. But the most enticing part of the whole day is the flowers.

For me, the anticipation of the dawn of flower season began in December. While I have thought about what flowers to put on the all-important graduation hat, actually picking out the types of flowers at Dr. Delphinium made me even more excited for the arrival of spring and the season of flowers.

Beyond the graduation hat, the millions of flowers planted around Hockaday always excite me. The colorful campus cheers me up even on the worst of days.

For me, flowers represent happiness, while rain embodies sadness. I would much rather have softball season and flowers than pretending to play a combination of wallball, basketball and softball in the small gym with the dark rain splashing outside.