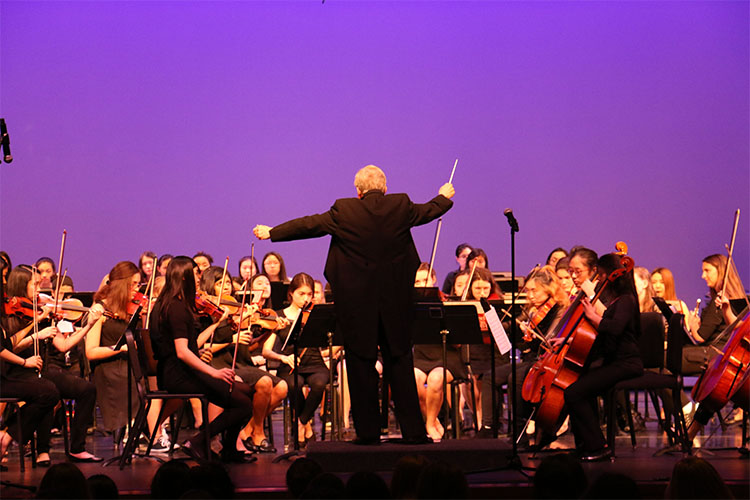 Ed Long, Nancy Penn Penson ’41 and John G. Penson Distinguished Teacher in Fine Arts, Fine Arts Department Lead Chair and Dean of Upper School, has been a member of the Hockaday faculty since 1970 and has come to represent and define Hockaday as a whole. Most recognizable as the History of Art and Music teacher, which every sophomore has the opportunity to enjoy each year, the leader of the Hockaday Upper School Orchestra, or a “walking encyclopedia of the arts,” it’s safe to say Long is a staple in the Hockaday community.

“I like to keep my mind on conducting and not on thinking about my final concert,” Long said. “The student support has been overwhelming, and I get the feeling that the orchestra is important to them.”

Long has been conducting the Hockaday Orchestra for 42 years. With many concerts under his belt, Long still has trouble naming his favorite piece.

“It is like asking what my favorite artwork is,” Long said. “But the saxophone piece [this year] was killer.”

The Hockaday audience might also agree, since the students and faculty were all a little teary-eyed when Long professed his love for the piece during the Hockaday Orchestra assembly and described how Senior Tiffany Bai played the “Diversion for Alto Saxophone and Orchestra” so beautifully.

But, for Long, even though his time at Hockaday is coming to an end, he has been very busy keeping Hockaday’s Fine Arts and the on-going ISAS Arts Festival running smoothly.

Even with his success this year, it is still bittersweet for most Hockaday faculty and students, who will miss his smiling face in the hallways.

“He is an incredible leader and has become, over many many years, my dear friend. He cares more about the fine arts than anyone can imagine and he’s so good to the people he works with,” Chair of Performing Arts Beth Wortley said.

As well as leaving a mark on Hockaday by running the Hockaday Orchestra and teaching the History of Art and Music class, Long also created the Junior Patrons Guild (JPG), which has been immensely popular. Within the first seven or eight years of its creation, it has grown to 250-300 students from Hockaday, Jesuit and St. Mark’s.

“[Junior Patrons Guild] has been a great way for students to meet boys and people from other schools, and mainly to see all of the great cultural opportunities that are in Dallas,” Wortley said. “He’s really built bridges between Hockaday and art in Dallas through that, and built art patron’s for the future.”

The most affected by his departure would be his devoted students. Long has taught countless students throughout his years at Hockaday and has bequeathed his knowledge onto his orchestra, History or Art and Music and Junior Patrons Guild students.

One such student is Tiffany Bai, a Hockaday Orchestra saxophone player. Having been at Hockaday for four years, she enjoys orchestra, and her concerts have been memorable.

“Orchestra has always been a relaxing environment because Mr. Long is very patient with the mistakes we make,” Bai said. “I really enjoyed these four years being a part of orchestra, and I am really thankful for Mr. Long.”

As the ISAS Arts Festival winds down and the curtains finally come to a close, the Hockaday faculty, staff and students reflect on all Long has contributed to our community and Hockaday Fine Arts.

“He knows so much about all the arts, not just music,” Wortley said. “Every day I learn something new from him and I’m constantly impressed at what all he knows.”

But, even though Long will no longer be a part of the Hockaday staff, he will always be a member of the Hockaday community, giving a last piece of advice for any prospective concertmaster:

“Hockaday musicians are always saved by their intellect. If you can bring your intellectual focus to these musical problems, you are always several steps ahead,” Long said.