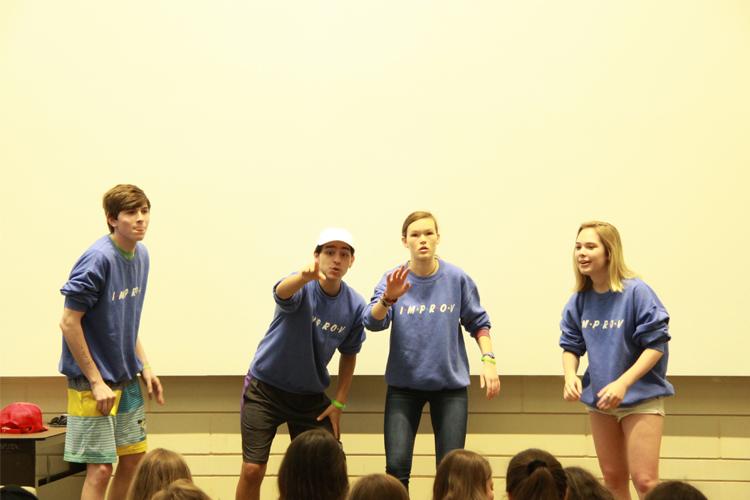 While the Friday of ISAS is to be a fourteen-hour celebration of all things fine arts, the intermittent lightning alerts stole the show. These alerts began shortly after 8:00 a.m. and continued until the end of the day at 10:00 p.m. The lightning forced attendees to go to the nearest inside buildings, which affected the scheduling of the outdoor events.

The weather forced Hockaday and St. Mark’s, or SmHockaprov, Improv to stop 12 minutes into their performance. Luckily, they moved to the Ownby Family Lobby in the science building to finish their performance, filling the whole lobby and upstairs hallway with audience members.

The weather alerts continued throughout the day, including one right during dinner, which caused the food tent to stay open until 8:30 p.m., one and a half hours past its normal closing time of 7:00 p.m.

This same lightning delay also pushed back Hockaday coffeehouse. They started as soon as the alert was lifted, but at 7:30, the performers and audience had to move to the 7/8 Commons to continue with the performances because Duchesne Academy of the Sacred Heart had to perform their already-delayed set. Duchesne then had to move to the 7/8 Commons one performance later because of another weather alert. Two Hockaday acts were not able to perform.

Hockaday lifted the ban just long enough that students could stand in line for the Houston Christian High School showcase. This also allowed for the Riverfield Rock Band to play a little of their set before another delay sent them inside.

At the end of the night, students had to load the buses and walk to their cars quickly because the school was still on weather alert. Despite the terrible Friday weather, attendees still found a way to make the most of it and show off their great artistic talent during the festival.