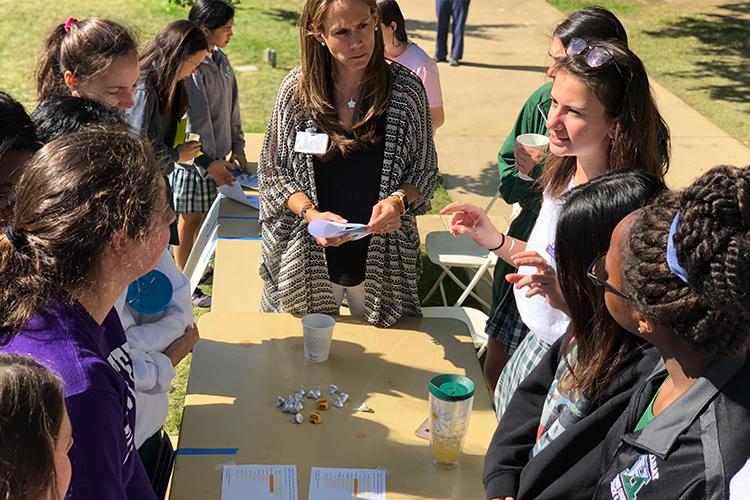 At 10 a.m. on April 20 – the 19th anniversary of the Columbine High School massacre – Upper School students and faculty left their usual classes and gathered outside at the Margaret Doggett Crow Amphitheater for Hockaday’s first Call to Action event.

Call to Action is an initiative created by a group of seven Hockaday seniors in order to give their peers a means of expression in light of recent tragic events such as the Feb. 14 shooting at Marjory Stoneman Douglas High School in Parkland, Florida.

Senior Anden Suárez was one of the seniors who organized Call to Action.

“It really started with me just going into Dr. Coleman’s office the day before we had our community conversations, and she happened to be there,” Suárez said. “I was thinking that many people, especially the seniors, had a lot of opinions and emotions to express especially after the Parkland shooting, and I wanted to know what administration was planning to do moving forward.”

Eugene McDermott Head of School Karen Warren Coleman informed Suárez about the repurposing of the One Hockaday event into community conversation sessions. As written in an email sent out to the Hockaday community on Feb. 22, Coleman states that the objective of these repurposed conversations was to “allow us to reflect and engage in dialogue as a community.”

Both Coleman and Suárez agreed that this was just a first step, and Suárez, excited, then followed up the next week.

First, the students planned the 17 Minutes of Silence event for March 23 in honor of the 17 victims of the Parkland shooting.

According to Brodsky, the silence was meant to give students time for deep reflection.

“The intention of that long silence was to force you to think about what happened,” Brodsky said. “A lot of us understand superficially that a tragedy happened, but we didn’t know what it meant. That silence was supposed to give kids the opportunity to reflect on the significance of what happened, and I hope it worked.”

Then, students and administrators looked forward to planning Call to Action, which took place this morning.

“We wanted to do something with the walkouts that were happening nationally,” Suárez said. “But, together, we decided that just walking out wouldn’t be as meaning as having somewhere to walk out to.”

Thus, this morning, the Upper School followed an adjusted schedule and congregated at the Amphitheater at 10 a.m. for Call to Action. The event started off with some words from Suárez and Michigan, and then participants were free to explore the various booths set up around the room.

Representatives from the Young Democrats, the Young Republicans, the Community Service Board, the Black Student Union, the Student Diversity Board, the Boarding Department, The Fourcast and more held booths where students could learn about ways to express their voices in their community. Activities for participants included registering to vote, writing letters to government representatives, engaging in service opportunities, playing games to learn about fake news, signing petitions and watching a memorial performance by Hockadance.

“I think it’s so important to keep the conversation global so that we don’t think our responses to recent political events are dependent on our location – these feelings are spread throughout the human race among all races, nationalities, religions, etc. and that is very comforting to me,” Brodsky said.

According to McPhail, one of the team’s major priorities was to make sure that there was something for everyone.

“I think something that is really cool is that it is bipartisan,” McPhail said. “As a culture, we tend to pin youth activists as being super liberal, and it’s left a lot of people feeling left out of this moment. There’s a significant group of people who feel disenfranchised with the way our political discourse is going. So, I think this event is great because it’s a way to say that political involvement and youth involvement is for everyone.”

Another purpose of Call to Action was focus on well-being within the Hockaday community. Day read about an initiative that took place at another school and decided to incorporate it into today’s event.

She along with Palmer counted out stacks of 17 sticky notes each with positive messages written on them. As people were leaving today, the event organizers handed out these stacks, allowing students to go out and cover lockers and the whole Upper School with these positive notes.

“Sometimes, isolation leads to people being upset or lonely. This is a way for us as a school to help combat that,” Day said. “With these stacks of 17 sticky notes, which is the number of victims in the Parkland shooting, we hope that people can know that others care about them.”

For McPhail, Call to Action was a way to lift her own voice for a cause important to her.

“This didn’t come out of a conventional avenue, which I think is really powerful,” McPhail said. “I think I as an underclassman thought that since I wasn’t in a leadership role, I wasn’t a leader, but that’s not the case, and I hope that we can show younger students that anyone can take initiative.”

Suárez agreed and is proud that the Hockaday community united for this event.

“As an educational institution, we have to believe that we should be able to get an education without being shot at,” Suárez said. “And through Call to Action, no matter your political beliefs or your stances on gun control or mental health reform, I hope students were just able to find a way to engage and express themselves in whatever way they wanted, whether it was through writing a letter or community service or even watching a dance.”

Senior Safa Michigan speaks about the power of the youth.
Senior Zasca Ristianto signs a petition.
Juniors write letters to congressmen.
A student reads the flier given out at the “Social Media” table.
Students and staff listen closely about how international students can get involved in American politics.
Students gather on the Margaret Doggett Crow Amphitheater during the walk out.
As students left, they were encouraged to pick up 17 sticky notes each so they could write nice notes on them. The notes were later put on the lockers of their peers.