Slap On That Filter (Or Not) 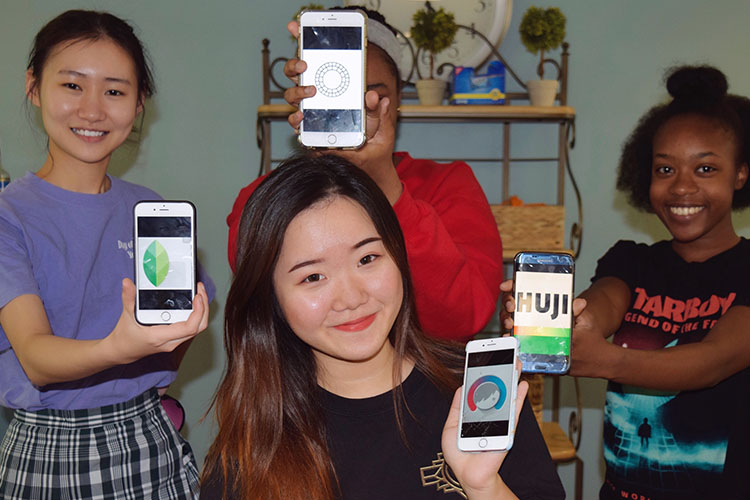 Good lighting? Check. Cute outfit? Check. Makeup on point? Check. You make sure that the flash is on. Finally, you and your friends pose and flash your spearmint-scented smiles at the camera and cross your fingers that this picture will turn out in your favor.

But what if it doesn’t?

Living in a social-media obsessed world, more and more people feel pressured to take the “perfect picture.”  This pressure has fed the rising popularity of photo-editing apps that soon became a staple in many people’s lives.

In a survey sent to the Hockaday Upper School student body on March 19, 88% of the 79 respondents replied that they edit their photos.

The respondents provided reasons for why they edit their photos. Many said that using a photo-editing app can make the picture look more “high-quality” and “professional.” One respondent answered, “because everyone is beautiful, but sometimes the quality of the photo is not so beautiful.”

Junior Sophie Pearson always edits her pictures before she posts them on Instagram. She believes that photo-editing is expected in today’s social-media world.

“Now Instagram is so polished, and everybody’s feeds are so coordinated. It’s all about putting forth your best photo,” Pearson said.

One of the most wide-spread photo-editing app is VSCO. VSCO allows users to add preset filters to pictures and make adjustments to saturation, brightness, contrast, temperature and more. In The Fourcast’s survey, 68% of the respondents, including Freshman Inez Johnson, answered that VSCO is their favorite app.

“The filters are really nice. They make your photos look cool and they have a lot of tools that make me feel very artsy,” Johnson said.

Another photo-editing app that has risen in popularity recently is Huji Cam. Huji is a free mobile app that imitates the effects of a disposable camera. Users can take photos directly on the app, and Huji will assign random light streaks and filters to each picture.

Although Huji has swept Instagram in the past month, survey shows that only 6 out of 79 respondents would say that Huji was their favorite app. According to Pearson, the app first gained reputation as a “novelty app,” but people are using it more seriously now.

“It’s so easy. It’s already done for you,” Pearson commented on the app’s functions.

Johnson, on the other hand, wishes that she can have more control over the filters that the app randomly assigns.

Other photo-editing apps used by respondents to The Fourcast’s survey include Snapseed, Adobe Photoshop Mix and Glitché.

Despite the wide-spread usage of photo-editing apps, some choose to not follow the trend. Junior Melody Chiu doesn’t edit her photos or feel the need to post photos of herself on social media, because she doesn’t want people to judge her for the way she looks in photos.

Apart from the common photo-editing apps that add filters or make adjustments to pictures, other apps offer more ways to the “perfect picture.”

Facetune is a popular photo-editing app that allows users to enhance facial features by whitening teeth, smoothing the complexion, reshaping the face and more. Somewhat stigmatized, the app is nevertheless widely used amongst teenagers.

Junior Kristi Li believes that using apps like Facetune is acceptable if users don’t alter the reality too much.

“Everybody can have a bad day when they don’t look good, and they’re forced to take a picture. That’s where the problem comes from. If that’s the case, they can use apps like Facetune to correct their face. But the most important thing is to love yourself,” Li said. Pearson also agrees that there’s no harm in editing a little to compensate for small imperfections.

Although the app is popular, many still feel uncomfortable admitting that they digitally alter their face. Others, like Chiu, choose to not use the app. Chiu feels that the app can potentially have a negative impact on her.

“I don’t like to use it, because I feel like using it kind of feeds insecurities in that the more you use them, the more you normalize the toxic feelings about the way you look. I feel like it’s kind of going in the opposite direction of acceptance,” Chiu said.

“Chinese people seem to assume that this phenomenon is okay. It has been around for a long time, and people are just accepting that photos that people take have some fakeness in it. In America, diversity and the push against beauty standards have kept this phenomenon in controversy,” Li said.

Scrolling through Instagram, it’s evident that the photo-editing trend isn’t likely to go away any time soon as people are constantly finding new apps to use and new ways to edit their photos. While some argue that photo-editing might make the picture seem less real, Chiu thinks that the trend shouldn’t be stigmatized.

“People want to share things on social-media, and sometimes the only way they feel comfortable doing that is to put a filter or photoshop. Having the ability to change photos a little bit to make you more comfortable is a good thing,” Chiu said.