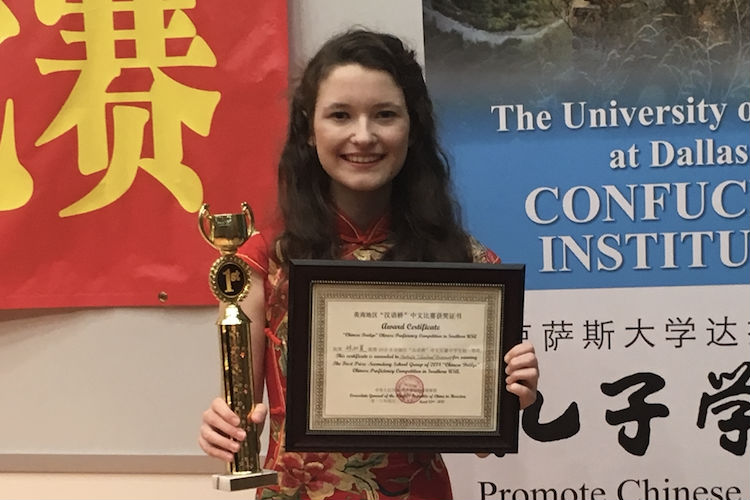 Many consider Chinese as one of the hardest languages to master when regarding the world’s most difficult language. Having five different tones and thousands of characters without alphabet, the challenges Chinese possesses make the road to success extra bumpy. But for Hockaday sophomore Charlene Brzesowsky, these challenges have become her passion.

“She’s absolutely very advanced for sure. She’s an eager learner in class and her work ethic is just incredible.”commented Bao.

“For her talent show she did kuai’ban, a very ancient Chinese music instrument, which was marvelously impressive.” Bao added.

Brzesowsky’s journey of Chinese started when she first came to the United States. Coming with a Germany heritage, Brzesowsky’s experiences were bilingual from the very beginning.

“I speak German at Home, and I’ve done chinese in school for four years,” said Brzesowsky, “I actually started learning Chinese by myself a year before that, although it wasn’t formal.”

“(pronunciation) is very difficult with all the different tones in Chinese. The characters are so hard for me as well.” described Brzesowsky. As a matter of fact, the burning enthusiasm Brzesowsky possesses has become her motivation which encouraged her to overcome the incredible amount of obstacles.

“She has to take private lessons with music and history teachers,” said Bao, when describing her impression of Charlene outside of school, “Charlene’s kuai’ban teacher is from China, so she has to do courses over skype. Because of the time difference, sometimes she has to get up at 3 or 4 am, which takes a lot of efforts that I really admire.”

Brzesowsky has recently been recommended by the Confucius Institute Headquarters to become one of the candidates to host 2018 National Chinese Language Conference to be held on May 17-19 in Salt Lake City.

The National Chinese Language Conference has cumulatively attracted 11,625 national, state, and local educational leaders, school principals and teachers, higher education faculty and representatives of international and professional organizations from all across the U.S. and a dozen countries globally. Brzesowsky was nominated according to her outstanding performance in the “Chinese Bridge” Chinese Proficiency Competition.

“I’ve always had a passion of Chinese, from the moment I first heard it.” said Brzesowsky. In October 2018, Brzesowsky will be heading to Beijing, where participants from all over the world will compete internationally.