Taking a Swing at Fame 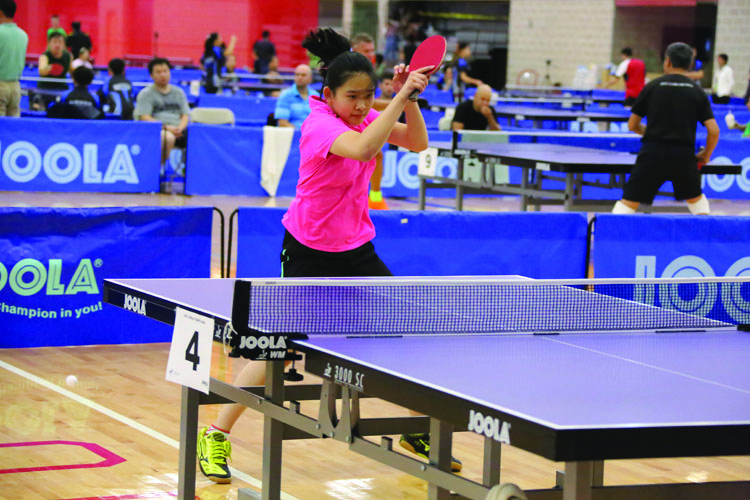 PICTURED ABOVE // Freshman Tia Hsieh takes a swing at an approaching ball during a tournament. Photo by Grant Bergmann.

A white ball whizzes across the rectangular, blue table—nearly untraceable by the naked human eye—hovering gracefully above the net before crashing down in chaotic fury onto the opposing side. For a prolonged period of time, all that can be heard are rhythmic noises of the contact between the table and the surface until finally, a gasp escapes the lips of the onlookers, followed by a deafening eruption of cheers.

Although often thought to be a casual hobby, for Hsieh, table tennis is no leisurely activity. She is a member of the women’s division of the United States’ Cadet National Team, consisting of only the finest four female players 15 years old or younger from across the country.

“I think a lot of people misunderstand table tennis as a garage sport because no matter what skill level you are on, you can get the ball on the side of the table,” Hsieh said. “However, no ball is ever the same, and you need to adjust to every single one of these balls within less than a second.”

As most passions tend to do, Hsieh’s started out simply as a way to occupy herself at the after-school daycare that she attended in Plano.

“There was an after-school daycare program where there were other activities, for example, basketball, dance, table tennis. I was interested in basketball and table tennis when I was in pre-K or kindergarten. Then after a year of training, my coach told you, ‘Well, if you want to go into one field, you have to pick one,’ so I picked table tennis,” Hsieh said.

It didn’t take long for Hsieh to create a name for herself amongst the table-tennis community. By the time that she was 9 years old, she was a member of the Mini-Cadet National Team, exclusively for those 13 years old or younger, and had played in her first international tournament. A year earlier, at age eight—after only two years of playing table tennis—Hsieh had already made her way to the Table Tennis United States Open and was ranking nationally. Since winning her first national tournament when she was 8 years old, she has claimed a grand total of eight national titles and has made the national team five times.

These accomplishments account for only a few of the countless achievements that Hsieh has already attained at just 15 years old. But that is not to say the process of becoming so skilled at such a young age has come easily. For the past 11 years, Hsieh has had to balance daily practices and missing school for large tournaments with her workload, a feat that does not prove easy to accomplish.

A typical practice for Hsieh consists of a morning routine oriented towards serving and an afternoon physical practice. When practicing one-on-one with her coach Feng Zhe, a former Olympian and member of the Chinese national team, she practices as Kim’s Table Tennis. Zhe has now trained Hsieh for three years, and as a result, knows her very well.

“When Tia meets certain obstacles, she tends to think and tries to work her way around those obstacles, and she has the energy and determination in which she continues to go on even though there are obstacles in her way,” Zhe said.

And her determination and upward thinking have not failed her. Most recently, Hsieh placed fourth in Under 21 Women’s Singles and fourth in the Under 15 Girls in the 2017 United States Open. Additionally, she is ranked within the top 25 women in the United States.

Hsieh’s drive is apparent not only through her success in the sport but to those she interacts with. Lavanya Marutha, Hsieh’s past competitor and now teammate, appreciates her dedication drive.

“I’ve known [Tia] for about 10 years. She is really powerful, and a really friendly person. She is good at mostly everything and has a great fighting spirit,” Marutha said.

Not only is Hsieh compatible with those she is well acquainted with, but those she has little in common with as well—not even language. On multiple occasions, Hsieh has participated in doubles matches in which her teammate spoke little English. Hsieh does not allow this to deter her path to success, however, as she copes with situations as they arise.

Whatever challenge Hsieh comes across, she meets with an open mind and positive attitude. Although she looks forwards towards greater things to come, such as the 2020 Olympics, she frequently recalls the first time she realized that she wanted to play table tennis as a sort of reminder of how she has grown as both a person and a table tennis player over the past 11 years.