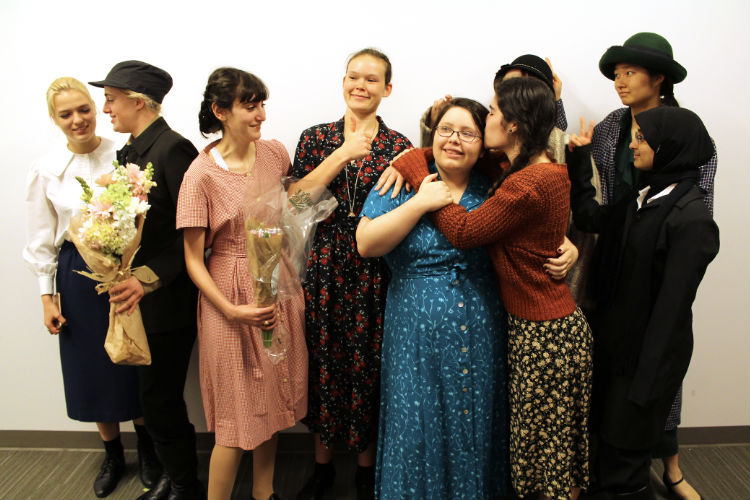 The play takes place in 1938, pre-World War II and tells a story of a 9-year-old Jewish girl, Eva Schlesinger, living in Germany. Her identity is challenged when she is separated from her parents, sent to England by the Kindertransport and torn between her parents and her foster parents. “Kindertransport” focuses on a different side of history, one about the consequences of historical events on an individual.

To protect jewish children from the looming threats of war, the Kindertransport transported groups of kids from Germany and Austria to France, the Netherlands and Belgium, but mainly England. People in these countries were asked to foster the children indefinitely until the parents were able to come retrieve them.

Emily Gray, Upper School Drama Teacher, introduced the play to the HTC to be performed at ISAS. About 13 years ago, Gray herself performed in “Kindertransport” and was fascinated by the beauty of it. The one-act is very female-oriented, with the majority of the roles being female characters.

“History needs to be always remembered, and one of the ways in keeping the stories alive is to keep things alive theatrically,” Gray said. “I think that an important part the theater does is that it plays a part of our combined cultural experiences and heritage.”

Junior Megan Muscato played the main role of Eva, a young child who was separated from her parents at an early age. She agreed that the play touches on major historical events and that are more than just facts on a history textbook.

“We hear much about what happened during World War II, [but] don’t get to hear the other side of the story where parents are sending their kids away,” Muscato said. “They have to grow up with not knowing where they really belong and did they really wanted to die with their family or live without them?”

History textbooks often lack the “human part” of history; humaneness in historical situations is generally not shown. Facts and dates hardly describe the lives of people, especially emotional and mental aspects in detail. Because “Kindertransport” focuses on the sentiment of history and its consequences, melodramatic emotions are almost always mixed in conversations and body language.

“It’s really a dramatic piece—a lot of yelling, crying, screaming—a lot of being scared. Since we don’t have a lot of cuts, there is not much buildup to the scene, so you kind of have to do it on a spot, and it’s emotionally draining once you’re done with it,” Muscato said.

The challenge accumulates as the time periods which the scenes take place in change constantly. For instance, the audience will see a 9-year-old Eva in Germany with her parents, and then be transported to a dream where a 50-year-old Eva—now Evelyn—faces the monsters in her nightmares.

Junior Meredith Jones, who plays Helga, Eva’s mother, explained how the smooth transition between different actors with same roles was made. For her character, red props were commonly associated with Helga.

“For these transitions, we tried to take symbols and objects and props that are distinct to the character, we use that to signify the switch so that the themes can be continued out,” Jones said.

To give the play more credibility, the actors take on British or German accents. Muscato, who speaks German, was excited to put her skills to use by incorporating German phrases and accents in her speeches.

Each character is unique when it comes to their personalities. Because the play is so dramatic, all roles are filled with complex emotional traits and thoughts. Young Eva has emotions that most 9-year-olds don’t experience, such as constant fear, nervousness and angst. Because Eva is a character who is very reserved and nervous, she draws empathy. And Muscato decided to shape the audience’s emotions during the play. Muscato wanted the audience to resonate with what Eva was saying throughout the play.

“She is trying to say that even though the perception of parents sending their kids away in the Kindertransport is their best intention, it sticks with [the children] no matter how hard they try to get rid of it,” Muscato said.

Jones interpreted Helga as a clever character with deep concerns for her daughter, so she appropriately conveyed these feelings to show her concealed true intentions.

“This was a tough decision for Helga, and in the end, she sacrificed a lot in order to try and provide the best future for her daughter. It is heartbreaking for a parent to realize they cannot protect their own child,” Jones said.

The description and interpretation of each character differs for every actor. According to Gray, they must be “as truthful of individual characters they can be.” Each actors tell the story of their own characters, not the whole play itself. As long as the actors play their roles clearly and truthfully, the audience will see the multiple parts of “Kindertransport” as a whole.

“We don’t just see the story of one little girl, but a mother left behind, a new mother that took the child. We see the wide ramifications of an adult who is not able to trust easily because of what happened to her as a child. The actors’ responsibility is to make sure their part of the play is clear,” Gray said.

After World War II, because the communications between the children and the parents were cut off, many lost hope on their parents’ survival and became naturalized citizens. On the other hand, the lucky few children who reunited with their parents found it difficult to relate to them since a lot of time had passed and they were teenagers by then.

Freshman Mia Xia watched “Kindertransport” at ISAS and described her thoughts after watching the one act as reflective, making her look back to her own life. Bittersweetness filled her heart as she saw Eva losing a large part of her life that she had known for so long.

“[Eva] lost probably her biggest part about her identity, her religion. She was forced to lose the Jewish religion that she had for so long [known]. She was forced to push all of that to the past because of her situation,” Xia said.

Jones was able to relate to Helga on a deeper level due to her own personal experiences.

“I think it is important to pass down stories and traditions down through generations so we do not lose our identities. I am a quarter Hungarian but I really do not know much about that culture, but I have always wished I did because even though I do not know a lot about it, I feel as if it is a part of me and my family’s story,” Jones said.

The audience was greeted with a name tags on each seat when they first entered the theater. The tags displayed real names and numbers of children who were part of the Kindertransport. After the show, some took the tags with them.

“They didn’t just throw [the name tags] away, but they put them down in reverence. They held them for a second. That’s what we were going for,” Muscato said.

Even though Eva’s story may be fictional, Gray believes that she may even be a representation and amalgam of all children involved in the Kindertransport mission.