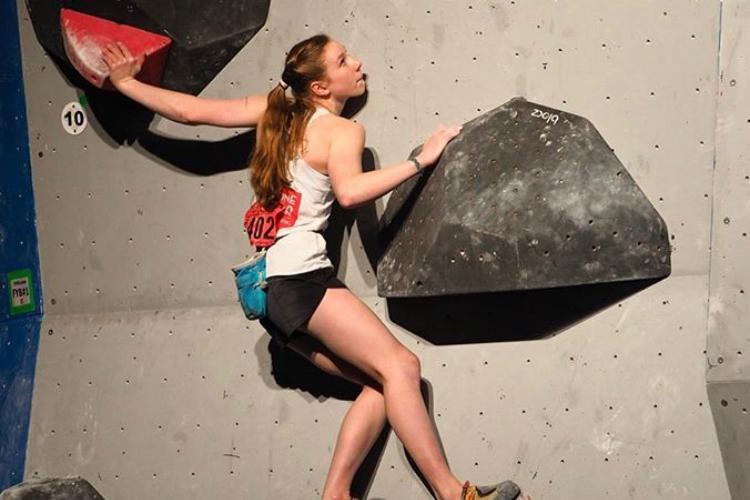 On August 12, sophomore Laine Betanzos and her friends crowded around a computer and excitedly opened up a live stream. They were getting ready to watch their friend Sarah Kate Ashton compete for the United States at the International Federation of Sport Climbing World Championship in Russia on live TV.

Sarah Kate Ashton, a sophomore at Hockaday, participated in the nationals for rock climbing last year. Ashton competed in three categories at nationals: bouldering, a form of rock climbing that is performed on small rock formations without the use of ropes or harnesses, and speed and sport, climbing up high rock towers with a rope and harness.

Ashton won her age group in all three categories and became a national champion, qualifying herself into the Rock Climbing World Championship in Russia for bouldering.

In August, Ashton traveled to Worlds to compete in the Youth B category with 67 other climbers ranging from 13 to 15 years old. The competition consisted of three rounds: qualifiers, semi-finals, and finals.

Ashton passed through qualifiers and finished with an astonishing 12th in semifinals.

“It was such a unique experience to be with the other teams from other countries and talk to so many different people from around the world about their experience and competing in climbing,” Ashton said.

In bouldering, Ashton and her competitors, participate in a series of four-minute sections. The first four minutes are given to the competitor to figure out how they will climb the wall, then they attempt to climb the challenging course, with no time limit, finally four minutes to rest, then repeat. The rigorous cycle continues until the end of the competition.

Bouldering competitions emphasize on short climbs at a high skill level. Climbers are allowed to have more than one attempt but their score is determined by the overall number of routes completed and the number of attempts needed for each route. While in the competition, competitors cannot receive help from any outside sources.

The competition opened and closed just like the Olympics with ceremonies and each country being represented by a flag and typical clothing from their homeland. The United States flag bearer was decked out in full cowboy gear, perfectly representing Ashton’s home!

“The best part about watching SK compete was listening to the Russian announcer calling her name as she ran out to start her first climb on the first day was totally awesome,” K. Ashton said. “Hearing her name [‘And now…Sarah Kate Ashton for the Team of the USA’ in a very heavy Russian accent] made it all seem so real and so important. My daughter was actually competing at the world championship!”

Ashton’s dedication and love for the sport shines through with everything she does.

“Not one time since [Sarah Kate] started seriously climbing in 4th grade have I had to encourage or plead with her to go to practice or get up early to go to a competition…she is always ready and always excited.  It is amazing to see that kind of passion and dedication in your child,” K. Ashton said.

Laine Betanzos, a close friend of Ashton, has been watching Ashton compete since 7th grade.

“She genuinely enjoys rock climbing so much, and she dedicates so much of her time and weekends to excelling in the sport,” Betanzos said.

The key to Ashton’s success is staying calm and collected throughout the whole competition.

“Keeping my head about me while I was competing in front of so many people and while the competition was being streamed was really important,”  Ashton said.

The next step in Ashton’s career is to compete in adult competitions along with the Youth circuits. In the adult competitions she will be competing against climbers 16 and up. Her next big event is the National Cup Series, which consists of four major rock climbing events throughout the year. The next one is on September 21.

As Ashton balances schoolwork and her intense training schedule, she continues to thrive and grow.

“She is really in charge of her future. Thankfully she has amazing climbing coaches and Hockaday teachers to help guide her through the next few years,” K. Ashton said.