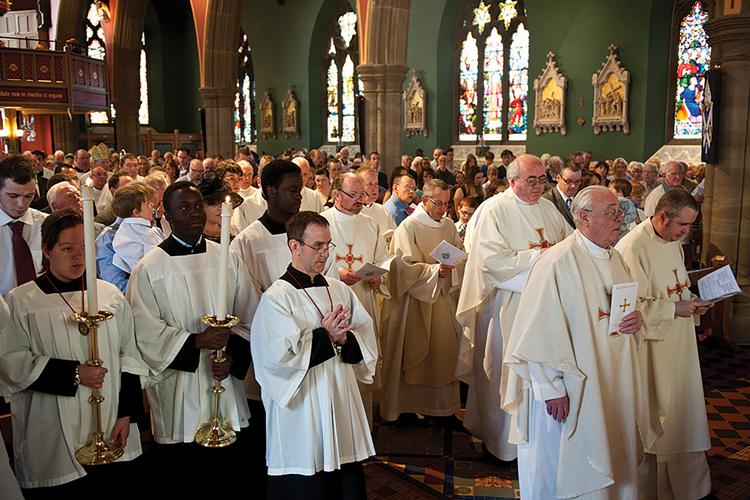 //PICTURED ABOVE: Catholic Churches across the world are recovering from recent priest abuse scandals. The Pennsylvania grand jury report was just the tip of the iceberg.

DISCLAIMER: THIS CONTENT MAY NOT BE SUITABLE FOR YOUNGER AUDIENCES.

Although the Pennsylvania grand jury released the findings of one of the most extensive priest abuse scandals in the United States Aug. 14, America is still dealing with the consequences. In a CNN report published on Aug. 16, the 1,400 page release told the story of over 300 priests abusing more than 1,000 children, mostly boys but some girls as well. These cases went back to 1947 and encompassed six different dioceses. A USA Today report detailed that the abuse survivors and children in Catholic schools at risk for priest abuse filed a lawsuit on Sept. 17 against the Catholic Church to ensure that the abuse would not happen again.

Why are Americans hearing about this abuse over 70 years after it began? According to Upper School history teacher Lucio Benedetto, the Church has a long history of secrecy in the matters so that it does not disturb the faith of the laity or trust in clerical institutions. Church canon law argues that such matters should be dealt with internally.

Before 2002, the Church ruled that abuse allegations were supposed to be handled internally; bishops could have been punished if they reported the abuse to the civil authorities. If the can- on investigation found that the accusations were true, they often moved the priest to a different parish or dioceses, or called them back to Rome. The abusers were never punitively punished.

The Catholic Church often spent millions in legitimate, possibly questionable, settlements out of court to provide some form of restitution to the victims, which in turn kept the allegations out of the public eye. Benedetto explained that due to the Church’s lack of transparency, it is truly unknown how many priests and bishops, beyond the hundreds already revealed in previous scandals in Ireland, Chile, Boston, Pennsylvania, Germany and Australia, in the Church have been involved in abuse or covered up the assaults.

Since the events in Pennsylvania and across the United States have been occurring for over 70 years, many of the accused priests are either dead or not a part of the Church anymore. Even those who are alive cannot be charged due to the statute of limitations. Victims have to press charges against their abusers before they reach the age of 50; otherwise, the statute of limitations will have expired. Only two priests are being prosecuted due to these limitations.

Benedetto also said that Americans seeing these reports might instantly react negatively against Catholics, misconstruing that all priests are pedophiles, since anti-Catholic discrimination has existed in the United States long before the abuse findings. According to him, John F. Kennedy was almost not elected as President of the United States in 1960 because of Americans’ traditional prejudice towards Catholics.

Father Tom Cloherty, Pastor of Prince of Peace Catholic Church in Plano, Texas, wants people to not let the evil found in these reports cloud their judgement of the Catholic Church.

“It is not that we ignore the evil, but at least put it back out where you can see other things that are happening in the world,” Cloherty said. “Let the grace and the goodness of God be there that can show people that can overshadow the evil that is being done.”

Attempting to remediate the abuse, many attorneys generals across the United States are deciding whether or not to summon their own grand jury to investigate priest abuse in their states because of civil lawsuits in the area. Benedetto believes that the use of civil lawsuits, which began in the 1980s, against the Church has been the most effective way to get the Church to cooperate with the civil authorities and bring unknown priest abuse to light.

Upper School history teacher Tracy Walder thinks that raising the statute of limitations for these crimes could lead to more victims coming forward because they can prosecute their crimes later in life than before.

“Sometimes it takes the victims a long time to come forward about these crimes,” Walder said. The Diocese of Dallas currently has counselling set up for victims and families of victims of priest abuse, whether the abuse happened in Dallas or not.

“The families and victims obviously get hit hard in all of this,” Cloherty said.

Before Cloherty worked at Prince of Peace, he was named the pastor of All Saints Catholic Church, the parish where most of Kos’ abuse occured, at the start of the Kos trial.

“I had to deal quite a bit with families and victims of abuse that remained in the parish as well as a parish that was affected by all the abuse that was done there,” Cloherty said.

However, these were not the only reparations the victims sought from Kos and the Diocese of Dallas. In July 1997, 11 plaintiffs sued Kos and the Diocese, who had to pay the victims and their families $23 million. In this lawsuit, the court found that the Catholic Church had covered up Kos’ abuse and desired the Church to admit guilt in their mishandling of the situation. Because of the Kos trial, the Diocese of Dallas implemented new safe environment guidelines to ensure the safety of children and vulnerable adults in the community.

About 20 years later, Dallas is again confronted with the problem of priest abuse. In a letter to the Diocese of Dallas, Bishop Edward Burns announced that three men accused Edmundo Paredes, a former priest at St. Cecilia Catholic Church, of molesting them when they were minors. Before these confirmed allegations came forward, Burns suspended Paredes for embezzling funds, but Paredes left Dallas before anything could happen to him.

“The moment the Church informed him that he was going to be placed under investigation, and of course because of the new rules that would mean a civil investigation under the Dallas Charter of 2002, he disappeared,” Benedetto said.

The Church hired two private investigators to find Paredes, but they have been unsuccessful. It is believed that he is in the Philippines, where he is originally from. Because of the abuse findings, Burns has instituted four town hall meetings in various parts of the dioceses to hear the parishioners’ opinions and has asked the parishioners to pray the rosary before Mass in October “for the healing of victims and the sanctification of priests.” He is also commissioning a researcher to read the Pennsylvania report and recommend changes to the dioceses.

Cloherty understands the powerful emotions that victims, families of victims and Americans are feeling as they learn of the large-scale sexual abuse committed by the Catholic Church. However, he wants people to understand that not all clergymen are like that.

“Yes, there are people who have done bad things, but don’t let them be the total representative of the Church,” Cloherty said. “Be open to see the goodness that people really do in and through [the Catholic Church].”