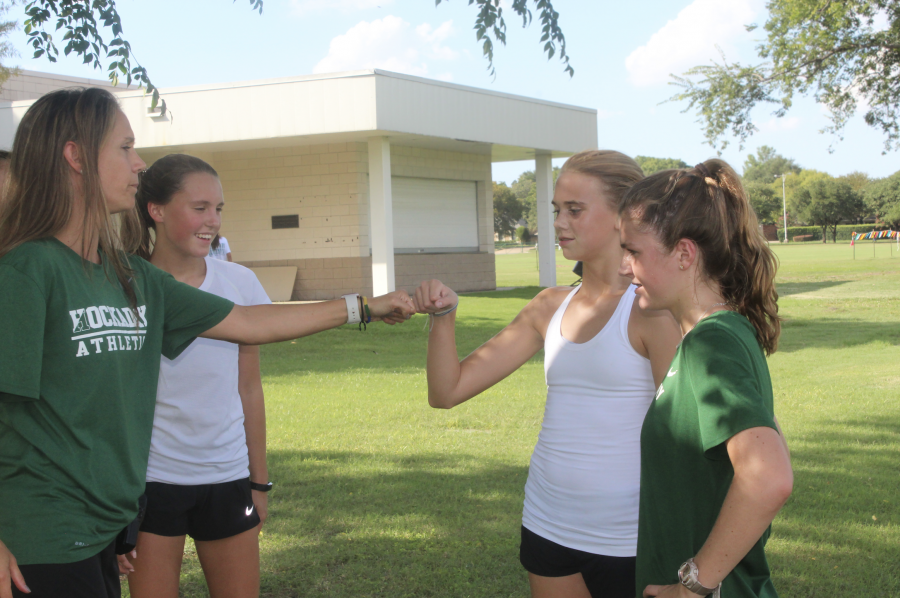 Sua?rez started her running “career” with en- couragement from other coaches, and she ran her first half marathon last spring.

“I find it to be a fascinating sport because it’s so individual that it helps you to push yourself and do something new almost every day,” Sua?rez said.

Beginning as an assistant coach for varsity and junior varsity cross country, Sua?rez was moved to Head of Middle School Cross Country, but still serves as a crossover coach. She attends every varsity meet on the weekends and most of their practices.

Due to her organization and constant enthusi- asm, Sua?rez has learned to juggle all of her respon- sibilities. She smoothly transitioned into the cross country world by memorizing all the many times the girls needed to run and attending every preseason practice at 6 a.m.

“I love it, anybody that wants to do it, I would encourage them to because it’s so fulfilling,” Sua?rez said.

“With a high energy level and the love the kids have for her, it was a perfect fit. I’m glad I chose her because everything is definitely coming together,” Bean said.

Bean and the Athletic Department’s goal to easily transition the middle school runners into the upper school cross country program is thriving under Sua?rez’s assistance.

Sua?rez’s love for working with girls helps her excel as a coach.

“She has definitely brought to the program more motivation and different little games she plays with the girls,” Bean said. “She encourages them individually and not necessarily as a group all the time. If she realizes that one person is falling back, she will accept the challenge and say, ‘Okay, let’s see if you can get one second faster,”

“I think we are definitely going to be closer and more supportive as the season goes on and I think we’re all going to get faster with her encouragement,” Petrikas said.

A typical middle school practice starts with a stretch and dynamics. The girls then do a long run or sprints on the track. Sua?rez always runs with the girls on the long runs. The practice finishes with a stretch out.

Sua?rez enjoys interacting with the girls outside the classroom and seeing them give everything they have into their sports, as well as schoolwork.

“What I really enjoy the most is at the end of the day finishing with such energy from the girls and it’s just fulfilling,” Sua?rez said.

Sua?rez plans to stay in middle school, where she plays a part in building the foundation for the young athletes in their exploration of the incredible world of running. Her ability to ignite hardworking attitudes within her team makes her a strong leader and coach for the girls.

“Long-term, middle school, I want them to have fun and I want them to really enjoy the process and really learn that they can do things that they never thought they could do before,” Sua?rez said.

Sua?rez can often be seen making her way down to the cross country fields, with energy radi- ating off of her. Her love for the sport, the girls and Hockaday is shown through her constant smile and joy.

“It’s so rewarding in every aspect and as I say, they make it so easy. My teachers, my girls, the stu- dents, I mean just being here- it’s magical,” Sua?rez said.