No Campaign, No Gain 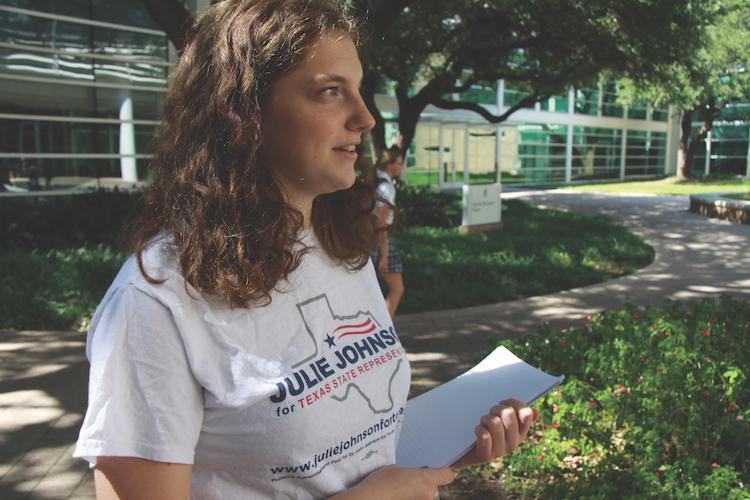 PICTURED ABOVE // Senior Tosca Langbert participated in Julie Johnson’s Texas House District 115 campaign over the summer. From this experience, she saw behind the scenes of election campaigns and further increased her passion for politics.

The rustling sound of paper and note-taking-induced hand-cramps don’t typically coincide with the summertime season. But some Hockaday students, who interned at political offices this summer, spent the majority

of the time taking notes, surveying and blockwalking. After keeping up with the hustle-and-bustle of a political campaign, Hockaday students Kirsten Kirk, Tosca Langbert, Elizabeth Roosevelt and Nisha Singh have much to talk about.

While Kirsten Kirk has been a

politically informed person for as long as she can remember, after the tragic school shooting at Marjory Stoneman Douglas

High School in Parkland, Florida, she became an outspoken political advocate. This past April, Kirk did a fellowship with Students March, a gun sense campaign, where she planned to organize school board meetings, petitions, public meetings and fundraisers. Kirk then used these ideas and her passion for stricter gun laws as catalyst to found the Dallas-Fort Worth chapter of Students Demand Action (SDA).

“I just realized that the best way to manifest my ideas and get them started was to start my own branch of SDA,” Kirk said. “[SDA] takes their passion, their anger, and a sense of betrayal by the government and they turn it into something productive.”

With the addition of Kirk’s DFW branch, there are currently 56 chapters of SDA nationwide. Their goal is to “make change… end gun violence and build safer communities,” according to their website.

Kirk also interned for Nathan Johnson’s campaign over the summer. Johnson, a Democratic candidate running for Texas Senate District 16, is actually one of Kirk’s family friends. Since she already knew him well and agreed with Johnson’s policies and beliefs, Kirk said

that once the opportunity had risen, interning for him just made sense. At her internship, Kirk input data and cut turf in addition to completing the more traditional intern jobs, like making copies.

Kirk uses her experiences with policies and Johnson to encourage others to become politically involved.

“What do you have to lose? If you think you can advocate for a change, or even become a stepping stone for someone else to make a change, you should absolutely explain yourself and stand your ground on things that are important,” Kirk said.

When Tosca Langbert was 15, she considered becoming a precinct chair, a member from each party who tries to encourage constituents in their districts to vote. She has been politically involved for a long time, whether it be reading the news, talking about politics, debating with friends or even attending a semester away in D.C. at the School of Ethics and Global Leadership. Langbert says that current events are always prevalent in her life.

so Langbert helped design a youth involvement program to help get local kids involved with the campaign. When she wasn’t working with the youth outreach program, Langbert block walked, called voters and cut turf.

“It’s nice having the knowledge of what goes on behind the scenes of a campaign. Seeing the research being done and getting to know the candidate—that was the intimate connection with the campaign I really valued,” Langbert said. “I’ve spent so much time reading and debating about politics, it was so nice to actually be a part of the action.”

Hockaday students are all taught from a young age to be resilient women; however, the idea of women being taught to be leaders is not always the status quo. Women comprise only 19.3 percent of the House of Representatives and 19.4 percent of the Senate. Having worked with a female candidate, Langbert encourages women to make their voices heard.

“The thought of being a super opinionated woman is intimidating… I want to be likeable, but

I think that sacrificing a little bit of likability for control is worthwhile,” Langbert said. “Empowering people to take that little tiny fraction of control they have and to use it wisely is a very productive use of time.”

Elizabeth Roosevelt has been politically active since she was about nine years old; since then, she has gone with her family to Capitol Hill in D.C. and met with Congressmen about various bills, usually focused on health care.

“It’s a rare opportunity that I am lucky to have, so I try to do things like that whenever I can,” Roosevelt said.

The majority of the time, when she’s not at Capitol Hill, Roosevelt reads the news, pays attention to local election races and follows certain issues, researching ways that she can become involved. For example, if there is a health care bill that she really believes in, Roosevelt will see if there is anything she can sign or do to help pass it.

Delving deeper into her political advocacy, this past summer Roosevelt interned in Congressman Pete Sessions’ office in D.C.. She attended hearings, took notes, answered phone calls, recorded constituents’ opinions on divisive issues and even gave tours of the Capitol to Texas visitors.

In doing her work with Sessions, Roosevelt gained a better knowledge of how politics, both in and outside of the Capitol Building, work.

“Honestly, I got a better understanding of what goes on in the government. It was so cool

to see what goes on in the daily life of a staffer. I learned that I have a lot more to learn, but that’s okay,” Roosevelt said. “I learned a lot of responsibility, especially if a staffer gives you a task like going to a hearing or taking notes, and that taught me better time management skills.”

Despite initially feeling some hesitation about spending two weeks alone in D.C. interning for Sessions, Roosevelt now cherishes her time  in his office and values her political experiences so much that she doesn’t regret her choices for a second. If anyone might feel nervous speaking their opinion on controversial topics they believe in, Roosevelt encourages them to take a leap of faith and go for it.

“Do not be afraid of what other people think, that was a big thing for me. I think it’s so important just to know that there are other people who feel the way that you do, and that’s a huge factor in what goes on in politics,” Roosevelt said.

Over the summer, Hockaday senior Nisha Singh interned at her local congressional district campaign, District 24. She campaigned for the Democratic candidate, Jan McDowell, and also interned on Ed Meier’s campaign before the primaries happened in March.

According to Singh, there was a big difference between the two campaigns: Ed Meier, who was the Democratic candidate in District 32, had a lot of media support and attention compared to McDowell’s.

Singh initially became involved with campaigns and political advocacy since she is only 17 and cannot vote herself.

“I am active in politics in the sense that I’ve always wanted to learn more and feel like I identify with a particular side of the spectrum more so than the other…and it is your responsibility to see where you lie and bring about change that you want,” Singh said. “[Despite being unable to vote], I realized at the end of 2017… that I can make a change. There is a lot more power in the people than we might believe.”

Outside of her campaign internships, Singh is involved with an organization called SAAVE, South Asian American Voter Empowerment. She has been working with them for a while, computing South Asian voting statistics and reaching out to South Asians about voting. She works actively to help encourage this community to vote.

“Many South Asian Americans don’t feel that this is their country and that they have weight in what happens. I’d already been working with them, and with those connections, I reached out to campaigns that were happening here to see what changes I could make,” Singh said.

From doing hands-on work with politicians and SAAVE, Singh gained a lot of experience and appreciation for political public figures. According to her, there’s a lot more than people realize in creating a campaign that people truly want to invest themselves in.

“Because I watched people from Texas who worked so hard for Texas, I think I took ownership that this is my home. And nothing can disconnect me from that,” Singh said.

Story and photo by Eliana Goodman