Keep Calm and Gary On 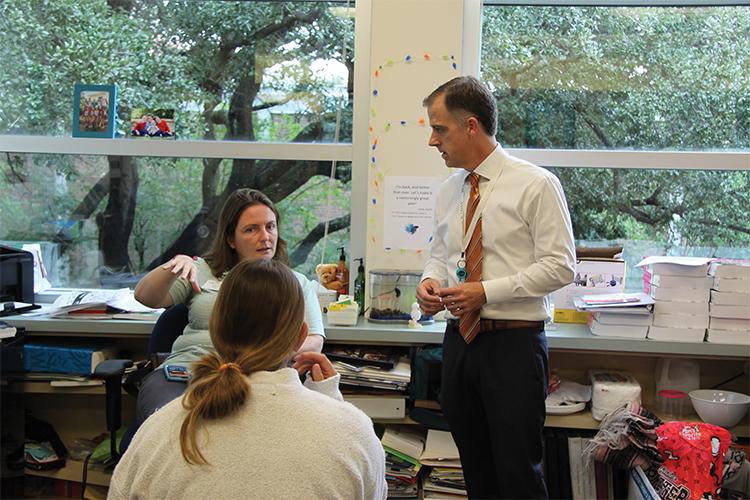 PICTURED ABOVE // Gary Stollar and Laura day talk with one of their advisees, junior Erica Hulsey. Stollar and Day began co-advising this 2018-2019 school year. Although they have only been advising together for a little over a month, the two are quite the dynamic duo.

For the Hockaday boarders, summer vacation came to an end with a new beginning. Following the resignation of previous Director of Residence Department, Meshea Matthews, the Residence Department welcomed Gary Stollar as the new overseer and Dean of the boarding community.

Prior to his succession, Stollar devoted the majority of his time to serving as the Middle School history teacher and a member of Residence Department’s international program. Stollar’s enthusiasm for world history defined his love of international studies, and eventually, his interests in global cultures bonded with his commitment to encourage diversity of learnings.

“I was attached to boarding because all of our international students are boarders. [Learning about other cultures] has always been an interest of mine,” Stollar said.

The Hockaday Residence Department is home to students from 13 different countries, including but not limited to Saudi Arabia, China, Korea and Germany. In addition, boarding hosts domestic students from 12 states and one United States territory.

Aside from his vast devotion to the international program, Stollar is also a strong contributor to the creation of a comfortable, home-like environment for all students. Believing in the benefits of communications between different cultures, Stollar aims to maintain a balance in the Resident Department where Hockaday girls can learn and thrive.

“We have 79 girls this year, and about half are international. It is a great mix, and I get to work more broad-based,” Stollar said. “[The Resident students] all come from a different perspective, and the respect that [they] show each other along the way, to me, is quite impressive.”

In addition to Stollar’s dedication to maintaining boarding’s home-like atmosphere, the community responds to his succession with multiple expectations. The start of every school year usually marks the emerging concerns about stress and mental health issues, which have also accumulated an increased awareness in boarding. Stollar hopes to put mental health issues on the forefront this year.

Hockaday senior and House Council President Maria Sailale voiced her opinions on the aforementioned topic on behalf of the student leadership in boarding. Sailale joined the Hockaday Residence Department as a freshman and has been re-elected by the boarding community for two terms as the House Council President.

“Because [boarding] is on campus and we don’t really get to go home, we’re just accompanied by all the stresses 24/7,” Sailale said. “The Upper School has two new counselors this year, and I think boarding should make mental health more of a priority and have that availability.”

Accordingly, Stollar addressed his aspirations to make boarding a safe environment where students can balance stress, rest and are able to recharge.

“I wish the community could live up to our four cornerstones. But keeping the balance outside of ‘scholarship’ is essential,” Stollar said. “I would like, at Hockaday, to help the students to achieve balance so that they have the appropriate amount of time to re-energize, to go have fun, but to also give them the space they need to prepare so that they do well.”

Apart from the need for more attention to be brought to the issue of stress, the Residence Department also anticipates many smaller changes. For instance, the community welcomes more cultural diversification. Hockaday sophomore and residence student Barbara Lou, who has been a boarding student since her enrollment in eighth grade, has suggested more changes be made.

“There’s a lot of things going on this year,” Lou said. “I would hope to have more real and legit cultural dinners, like the Hawaiian dinner we had a couple years ago.”

Expectations have raised following Stollar’s taking of the reins. While the new director is welcomed with anticipation for the upcoming year, the boarding community also welcomes new possibilities and energy.

“We should not only be lifelong learners in an academic sense,” Stollar said. “We should all want to be able to learn from the community and from each other. And I can learn from [the boarding community] on my path of education. For me, it’s exciting to take this step.”