Why the Kavanaugh Hearing Matters to Girls Like Me 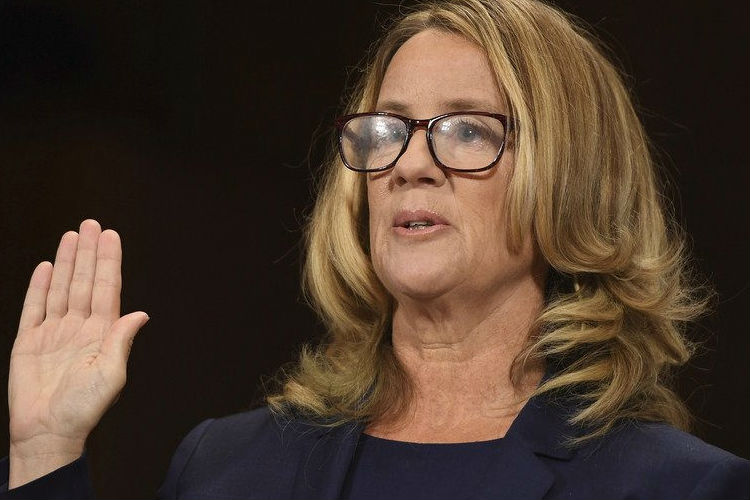 //PICTURED ABOVE: Dr. Christine Blasey Ford testifies at the Senate judiciary committee hearing on Sept. 27. Despite her testimony, the Senate confirmed Brett Kavanaugh on Oct. 6.

Advisory: The following editorial may not be suitable for all readers and contains sensitive content.

Brett Kavanaugh has been one of the most recognizable names in the news for the past few weeks. As I look through the headlines, political motivations surround the entire case. Kavanaugh even insisted that Dr. Christine Blasey Ford’s testimony was a hoax set up by the Clintons.

In a world where every headline, whether partisan or not, becomes a fight between two opposing factions in the American political landscape, it becomes hard to separate the merits of Ford’s testimony from its political connotations. However, to fully understand the importance of the testimony, we must leave partisan opinions behind and focus on Ford’s and Kavanaugh’s testimonies.

Imagine your teenage self socializing at a friend’s house. As you are going up the stairs in the house, someone pushes you from behind into a bedroom. Two boys come in, lock the door, pin you to the bed and sexually assault you. Despite your screams, no one comes to help you; one of the boys even puts his hand over your mouth to silence you.

This was what allegedly happened to Ford in 1982. As I walk myself through her situation, I get a glimpse of the trauma she must have experienced in that moment. What if that was me? What if I was thrust from a safe, happy atmosphere into one of my worst nightmares?

The Senate hearing is also not a one-sided debate. Kavanaugh maintained his innocence in his speech. As an additional defense, he used the fact that he was a teenager to lessen his wrongdoing. As a 16-year-old girl, I take great offense to the fact that he “was just a teenager.”

Seventeen-year-old boys, like Kavanaugh at the time of the assault, know the difference between consensual and non-consensual sexual interactions. Even if they are not well-versed on the differences between the two, common sense would say that pinning a girl to a bed and violating her while she screams for help is not consensual.

With the confirmation of Brett Kavanaugh, the Senate is telling young boys around the world that they can make it to the top of their field even if they sexually assault someone. This will lead to more boys believing that consent in a sexual relationship matters less than it actually does, which will have negative effects on relationships in the future.

Another consequence of the confirmation is the silencing of women victims in sexual assaults. Throughout the hearing, Ford has been berated and threatened by people she has never met before just because she wanted to inform the Senate of her assault. If women fear that they will not be heard, or worse, ridiculed when they come forward, less of them will do so.

This Senate hearing and confirmation sits at the cusp of a major political change in the United States; with the upcoming midterm elections, Americans are solidifying their opinions on major issues. In light of Kavanaugh’s confirmation, Americans should take a harder stand against those trying to silence victims of sexual assault. Without victims coming forward and others allying with the survivors, sexual misconduct will run rampant throughout the nation, and that is not the America I want to live in.