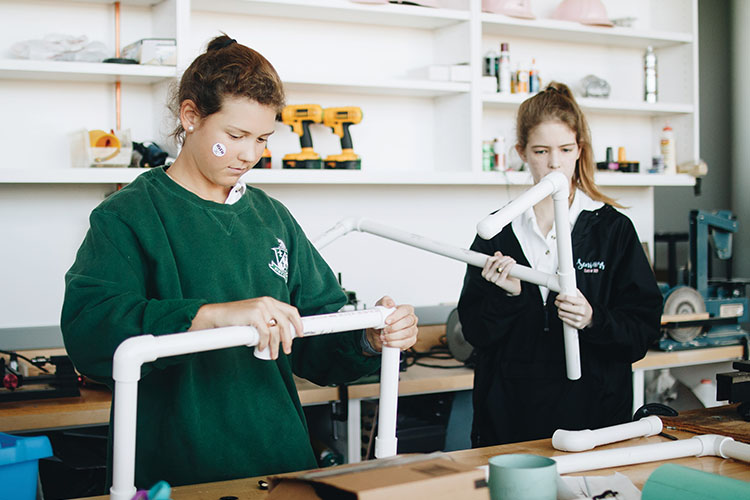 //PICTURED ABOVE: Seniors Felicity Diamond and Isabel Peppard, both engineering students, assemble lowboys using PVC pipes for their newest project dedicated towards building new equipment for the Hockaday crew team. Diamond rows for Founders Rowing Club, so if familiar with these this type of equipment and the ways that it works. Photo by Alexa May.

Rowers from Hockaday, St. Mark’s School of Texas, the Episcopal School of Dallas, Founders Rowing Club and Dallas Rowing Club are used to seeing each other around the boathouse; everyone has a general sense of who belongs to which club.

But one fall day, three unfamiliar faces disturbed the sense of familiarity that usually engulfs Bachman Lake, bringing with them an exciting new opportunity for Hockaday. Three seniors from Hockaday’s Engineering class traveled to Bachman Lack one after- noon to assess and measure the crew team’s equipment. It was seniors Felicity Diamond, Isabel Peppard and Justice Coutee. The three girls took on the task of rebuilding some of Hockaday’s crew equipment, such as slings and lowboys, both of which are meant to hold boats when they are not in the water.

The Hockaday Engineering class, which is taught by Upper School science teacher Leon de Oliveira, begins the year by learning how to think about problem-solving methodically, with the goal of reaching a viable solution. According to de Oliveira, the class has three main goals: how to go about solving problems, how to engineer a solution and how to research and find the skills necessary to get solutions.

“The purpose of the class is to study engineering design, go through the design process and figure out how to create new projects that will solve a problem,” de Oliveira said. “Before we started [the group projects], we did simple projects to learn how to break problems down.”

After beginning the semester with simple projects, the class then moved on to their group projects, which are based around picking an organization and then designing items that will help them with their day-to- day activities.

The groups can usually engineer their solutions using the materials that Hockaday has in the Engineering Lab, yet this year, de Oliveira believes that it might be necessary to think outside to box to make the projects a reality.

“We have some fairly large projects this year that we didn’t really anticipate,” de Oliveira said. “We’re going to have to find outside funds and other places to purchase materials.”

In the past, some girls have helped redesign equipment for Hockaday’s pole vault. Others have worked with Wesley-Rankin Community Center, a nonprofit organization in Dallas centered around “providing education and resources to drive community transformation,” according to their website, and North Dallas Shared Ministries, a “cooperative effort of 52 congregations that combine resources to efficiently deliver effective and appropriate assistance to Dallas’ poorest individuals and families,” as stated by their website.

This year, the students in Engineering are working with organizations in and out of Hockaday, including North Dallas Shared Ministries, the tech crew and the crew team. One girl is even doing a personal project, where she is designing a cane with sensors to aid blind people.

However, this is the first year that Engineering has worked with the crew team, and much of that is accredited to Special Projects Coordinator and Head Crew Coach Will Forteith.

“My office is in the science building, so I’ve enjoyed getting to know the science teachers,” Forteith said. “Mr. de Oliveira and I were talking, and when he told me about that class, I said, ‘I myself have some projects that would really help the team out and might be good for your class.’”

Though it was originally Forteith’s idea to collaborate with Engineering, he has more of a “hands-off” approach.

“Mr. de Oliveira asked me to come to one Engineering class and pitch what I needed,” Forteith said. “After that, the group was formed and they scheduled a time to come to the boat-house, and the last email I have exchanged with them was that they were working on the prototype. I am really more of the client, rather than the teacher, in this case.”

Diamond and her teammates have communicated with Forteith in order to determine what equipment needs to be replaced, while also being realistically feasible for the girls to build. After their visit to the boathouse, where they measured slings and lowboys, they began working on their prototype.

“I’ve emailed with Forteith back and forth for a while now, and our team met with him once during school to discuss the prototype,” Diamond said. “Once we finish our prototype, we’ll meet with him again and ask his opinion.”

Diamond rows for Founders Rowing Club and is already familiar with how slings and lowboys are built, and what exactly can be improved upon.

“I came into the project already knowing how [lowboys] are made,” Diamond said. “At regattas, I’ve seen a lot of different types of lowboys so we used those for inspiration while building ours.”

According to Forteith, lowboys can be made from a variety of materials, including wood, metal or PVC pipe. Currently, the students are using PVC pipe to construct their prototype.

“We used PVC pipe, melted it down and used PVC connector and screws to make the prototype, so it is mainly plastic,” Diamond said.

In order to guarantee that the prototype will hold the weight of a boat (a quad, a boat that can hold four people, weighs around 120 pounds), the team will use weights to see if it will hold. A quad usually costs around $25,000, so the team needs to make sure that the lowboys will not break under the weight.

However, the team is not sure what the finished product will be made out of. It could be made out of PVC pipe still, or the group could decide to make it out of something different based on how the prototype holds up.

“We could use PVC or wood, or even a combination,” Diamond said. “PVC is lighter, but we need to get Forteith’s opinion on it.”

Though the class has until the end of the semester to complete their projects, Forteith is hoping for a faster solution, as the crew team’s next regatta is on Nov. 10.

“I hope they’re going to have some of the lowboys done by [Oct. 27], if not all of them,” Forteith said. “My understanding of the process is that the group identifies the problem, shows me a prototype, gets my feedback on the prototype, tweaks it from there and goes on to the manufacturing stage.”