Donating for a Difference 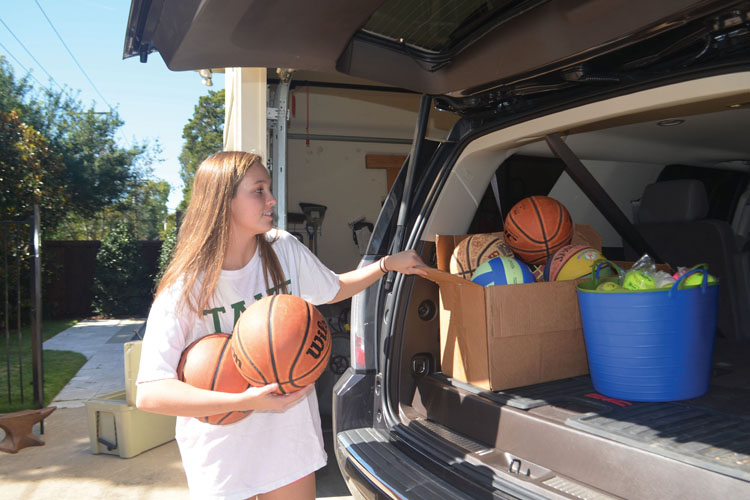 //PICTURED ABOVE: Giving Back: Junior Madison Stringfield loads sports equipment into the back of her mom’s car. She will then donate this equipment to various different schools and community centers across the D.I.S.D. area. Photo by Maddie Hum.

At first glance, junior Madison Stringfield may appear to be like any other high school athlete. She began playing sports at the age of four, and continued on this path throughout the

rest of her school career, focusing her effort on certain ones that she liked more than others. However, this is where the similarities diverge, for Stringfield accomplished something that not many students can say they have done: she created a nonprofit.

Nearly six months ago, Stringfield began laying the foundation for what would soon become a much larger-scale project.

“At the end of last year, I had a bunch of athletic equipment that I didn’t use, so I decided to start my own nonprofit,” Stringfield said. “This summer I really worked on getting a bunch of equipment from families that I knew and people in our grade.”

Essentially, she asked these families and members of her class to donate any old sports equipment that they no longer used. Stringfield then found ways to repurpose this equipment by donating it to various different schools and community centers that could make good use of the items.

Earlier on in the process, Stringfield reached out to Laura Day, Director of The William B. Dean Service Learning Program, so that she might help facilitate this effort.

“[Madison] sent all of these emails out and went and visited a lot of different community centers and local elementary schools and got information from them about what they needed,” Day said. Day helped Stringfield with the logistics of the process, as she collects all of the donations received and delivers them to their various respective locations. These locations include the Wesley Rankin Community Center, Genesis Women’s Shelter Outreach, Brother Bill’s Helping Hand, Tom C Gooch Elementary School, Lee A. McShan Jr. Elementary

When sending off her donations, Stringfield took a very methodical approach. She created a system that allowed her to track which places needed what, therefore allowing her donations to be that much more effective and personal.

“So [Madison] has this giant excel spreadsheet that’s like ‘Gooch needs basketballs and shinguards and blank’ and ‘Wesley Rankin needs this, this and this,’” Day said.

However, this event truly took shape at the beginning of October, when the donation effort extended beyond Stringfield’s close family friends and grade.

“A few weeks ago, the middle schoolers came to Mrs. Day, and they had the idea of doing a sports drive,” Stringfield said. “And Mrs. Day was like ‘Oh there is someone who has already started a non- profit for that if you want to work with her.’”

Thus marked the beginning of the Middle School sports drive, which ultimately exponentially increased the amount of donations that Stringfield had been receiving.

Eighth grader Karla Cervantes is the Middle School Student Council President, and therefore had a large role in helping organize the Middle School sports drive. Originally, she and some of her peers hoped that their first Rockaday, or Middle- School-wide event, could be sports themed. Natural- ly, Stringfield’s nonprofit coincided seamlessly with their plans.

“We heard of Madison and that she was in charge of a foundation for donating sports equipment,” Cervantes said. “So we thought that would fit perfectly with our Rockaday, which is sports themed, so our Student Council decided to email Madison and talk to her about the donations.”

Being a three-sport-athlete herself, Cervantes was eager to help organize the drive and promote donations from Middle School students.

“[The most rewarding part] was probably the feeling that we helped that school have a basketball team,” Cervantes said. “We definitely want to keep doing this the whole year and helping other people.”

Although the Middle School sports drive is now over, Stringfield plans to continue her nonprofit work well into the future. In addition to recruiting underclassmen to join her team, Stringfield also hopes to expand this initiative outside of the Hockaday community.

“She is working to get partners—like ESD and Greenhill…So her hope is, as she grows this—and maybe gets a little army of people—they can reach out to all the places, get all of the sports equipment and then start really reusing it,” Day said.

For now, however, Stringfield can take pride in all of the work that she has accomplished, knowing all of the positive change that she has brought to many individuals’ lives.