Paws for a Cause: Photography and Service 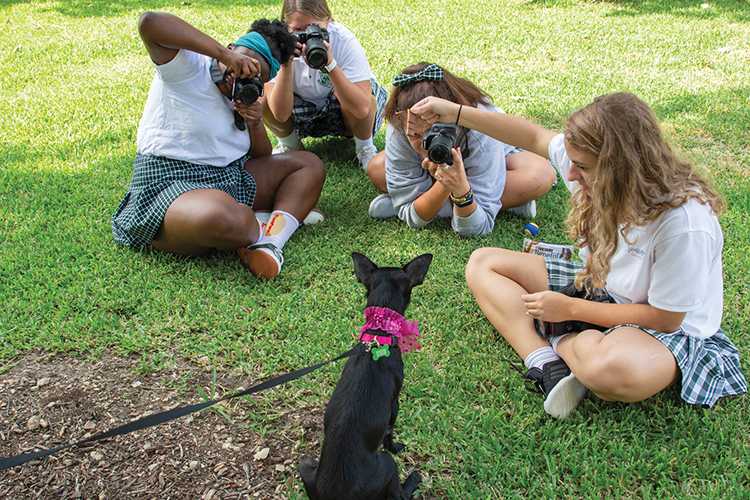 //PICTURED ABOVE: Hockaday Advanced Photography students take pictures of one of the dogs from Paws in the City during their class period. The dogs were brought in on Oct. 1, and students met them in the area outside of the Lower School Barn to photograph the pets.

On the bright, sunny day Oct. 1, Midas, Rita and Scamp visited the Hockaday Advanced Photography class. Their eyes glinting with mischief, Rita and Midas sat on a haystack as Scamp lounged in the grass, his yellow bowtie gleaming in the warm sunshine. The visitors weren’t students, family members or college representatives—rather, they were dogs from Paws in the City.

Paws in the City is a no-kill rescue organization working to end the abuse of dogs in the Dallas metroplex. The organization finds families to foster dogs from animal shelters until they get adopted, hoping to reduce the 6,000 euthanizations in Dallas. To help the dogs get adopted, the Advanced Photography classes took pictures of them for a photography project.

“For dogs to get adopted, photos are a big deal,” Day said, “I thought, ‘We have photography students, and kids love dogs.’” So, she contacted Yoshii-Buenger, who set up the unit and planned what day her classes would do the project. Day then reached out to the rescue group, scheduled time slots with them and communicated with Hockaday administration about bringing dogs on campus.

Yoshii-Buenger invited professional pet photographer Jenna Regan to teach her classes how to photograph animals, a unique skill that the photography students needed to develop when taking pictures of the dogs.

The students learned how to take pictures that portray the personalities of the dogs and how to capture unique things about the breed. Additionally, the students needed to figure out how to earn the dogs’ trust by letting the puppies get to know them on their own terms.

It’s just another way that we can be helpful. To me—and this is the important part—I think about repurposing as opposed to adding on.”

“Often, dogs are skittish in a new environment around new people,” Yoshii-Buenger said. To keep the dogs calm, students used dog treats and gave the dogs lots of attention.

For the project, Paws in the City brought three or four dogs to each class period on Oct. 1. The students took photos by the Lower School barn. Day stayed there for the entire day to supervise, waiting for the dogs to arrive and managing the project to ensure that everything went smoothly.

And it did. Although a few dogs were shy at first, they quickly warmed up to the students, and the photography collaboration was a success.

“Every dog was just so crazy and loving,” Day commented. “They all loved the students.”

However, instead of taking pictures of the dogs, sophomore Hudson Johnson chose to photograph the students.

“I thought it was really cool to see people’s reactions while photographing the dogs,” Johnson said.

The students then edited their photographs and will send them to Paws in the City, where the center will post some of the pictures on their website to help the dogs get adopted. The photography class will also showcase their photos around campus along with a description about the stray dog problem in Dallas.

The project is another part of Day’s initiative to implement community service in classrooms.

“It’s just another way that we can be helpful,” Day said. “To me—and this is the important part—I think about repurposing as opposed to adding on.”

She would like to implement community service without giving additional work or stress to the students and teachers.

“Mrs. Yoshii was going to have photo projects anyway. This was an easy fit,” Day said.

“I liked that we got to go outside and connect with these really cool people from the organization,” Johnson commented. “They were so happy when we were taking pictures of their dogs. It was a great experience.”