The Forgotten Heroes of War 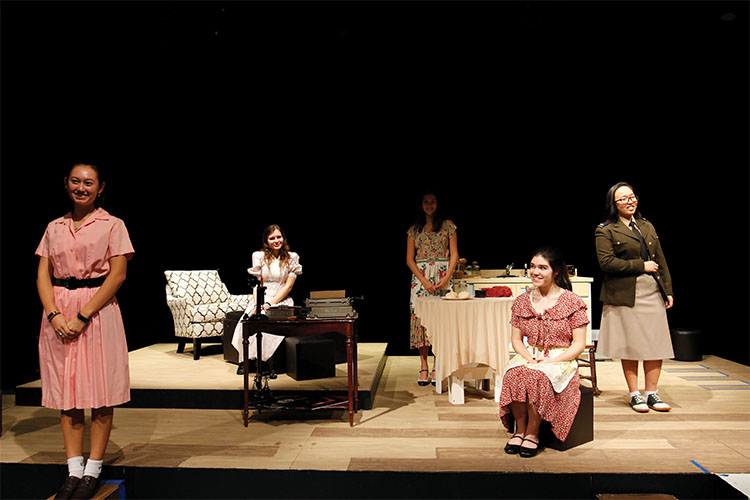 This fall, the Hockaday Advanced Theatre Class is putting on the play “Women in War.” The one-act play takes its audience through the tales of multiple women in times of conflict. The play tells stories of women and their role in wars that America has been involved in, specifically highlighting how their roles have changed as the years have gone by. It dates all the way back to the Civil War era and also includes the more recent Iraq War.

Drama teacher Emily Gray goes through the lines and directs students on where to move. She has carefully selected the play, after months of searching and is excited to see the impact that the play has.

Lily Forbes, a junior in Advanced Theatre, is playing the role of Helen, a woman in World War II whose boyfriend was just drafted to war.

Junior Celese Gierhart is a utility player (somebody who plays multiple roles within one play). Her roles include “donut gal,” “a body in a war zone” and a “Vietnam girlfriend.” She believes that Hockaday is taking a new direction with this play and that it is unlike any from the past.

“The different perspectives of the era, and how you can hear the writers through their letters as well as their diversity, I believe make the play different from any other that we have done,” Gierhart said.

The stories told through the play are realistic and often don’t have happy endings to them, which is a different take on the multiple Hockaday fall plays that have been done in the past.

“I hope that people know that happy endings are rare in the context of our show that even though it does have happy endings, they are not common,” Forbes said. The play takes a heavier note and focuses on more controversial topics compared to other fall plays that Hockaday has performed. Even though there are many humorous remarks, the message of the play is something that is serious and very relevant to our culture: the role of women in war whether it be at home or on the battlefield.

“A lot of times, Hockaday plays are focused on more funny things. It is interesting that this one is taking a different approach” said Gierhart.

Because the play is different from past Hockaday plays, the set design is unique as well.

“The crew had an interesting challenge to come up with a set or world that the play can exist in,” Gray said.

The set jumps around from a therapist’s offices to battlefields to kitchens. The transitions between the sets are done by the set design crew, who has been finding ways to encompass all the decades that the characters in the play are representing within the set. These universal sets allow for the characters to interact with one and another even if they are all not in the same eras.

“There has been a lot of input and there has been large design meetings going on,” Gray said. “The characters are away

at war so they wanted to create a common home,” Gray said.

The design crew has been working on the set since the beginning of the year. Since all the characters are always on stage, the main challenge for the crew has been to find one set that can represent all the different eras that the women in the play are from.

“Hopefully they will be fascinated by the set, I think it’s really unique and there are a lot of intricate parts on the set that add to the total image of the characters,” Gierhart said.

The play goes seamlessly through stories of each woman which is done through transitions that make sure the play can be understood by the audience.

“Each one is a snippet, if it was a movie it would be a montage, you dip in and out these stories constantly,” Gray said.

Finding a way to make transitions between the different eras of the play was difficult as well. With such a hard-hitting play, the transitions have to make sense so the message of the play does not get lost.

“For me, what is challenging is how to transition in and out of the time periods,” Gray said. “It would be really easy for the play to not make sense to the audience.”

By using music, Gray has been able to make the transitions easier for the audience to understand. She incorporates dances, like the jitterbug, to show that the time period is changing. For more modern eras concerning the more recent wars, she will play more up-to-date music, such as “I’m a Survivor” by Beyoncé.

“The music and the movement are things that help the play transition really clearly,” Gray said.

The play takes an interesting view on hard times at home, and shows how they can empower women, through common stories of wartime that would remain otherwise unknown to many of us. It shows that women did not just stand by ideally while their husbands, boyfriends, or fiancés went of to fight. Characters like the one Forbes portrays are there to show the audience how women have been there as an imperative part of the history of our country’s wars.

“Women in War” is a very different Hockaday fall play, as it takes often-forgotten periods of history and turns them into a modern relevant play about empowering women. Even if it is not funny like past plays the message of the play makes the show enticing and a show that all Hockaday girls should watch.

“I think it’s a very engaging show and the audience will find it very easy to watch and want to know what happens next,” Gray said. Gray hopes that the play will empower girls and inspire them through these stories of hard-working women, and showing that theatre can send powerful messages and doesn’t have to always be funny.

“I am always interested in shows that can stretch my actors and challenge them,” Gray said.

The play teaches her students about how to be more versatile actors and shows the audience that theatre is not only funny, but can be used to convey a serious message as well. Gray wants the audience to learn as much as she did while directing the play and understand the various roles that women have had to assume over periods of war. Gray believes that the show can teach the audience important messages about empowering women and hopefully inspire them to take action or to continue to learn more about this unfamiliar topic.

“Theatre is more than just a frivolous thing to do and the whole point of theatre is commenting on social injustices,” Gierhart said.