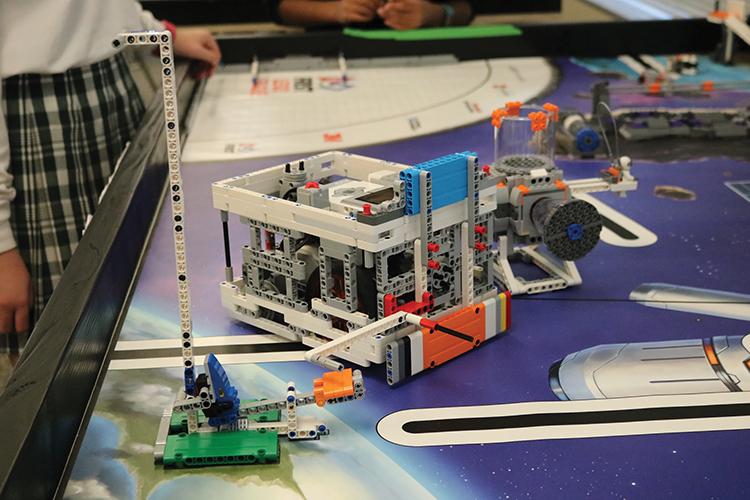 //PICTURED ABOVE: Since Hockaday’s Language Lab has gone virtual, the space has been repurposed into a Middle School Robotics work room. This allows the students to have more space to construct projects.

This school year, Hockaday is shifting from the Language Lab classroom to a new Language Lab that is completely virtual and is scheduled to be in use in foreign language classrooms before December break.

Previously, the Language Lab was in a classroom in the seventh-grade hallway. The room was split into isolated desks with equipment stationed there such as headphones, microphones and voice recording tools. But now, the lab can be accessed online and used anywhere from a computer or phone.

However, given that technology has vastly improved in the past decade, the equipment and functionality of the room was becoming outdated. Additionally, with four languages offered at Hockaday and several different sections within each language, one classroom was difficult to split between the different teacher and sections.

This year World Language Department Chair Alejandra Suarez and Academic Technology Specialist Candace Townsley are leading this project with the help of the whole IT Department, including Jason Curtis, Director of Technology and Information Resources, Lee Haller, Computer Technician, and Carolyn Ojwang, Database Administrator. They are working together as a team to figure out how to improve the experience for foreign language students by making the concept virtual.

“For my three years working at Hockaday, I have bee in charge of the technology portions of the World Languages AP Test, which were in the old Language Lab. This lab had old epiqment that failed a lot. Right before AP testing we would avt to check equipment, which did not always work,” Townsley said. “Doing everything virtually and in the cloud is the way things are going these days, so I think that space is better used right now as a classroom.”

Now, the old language lab classroom is now repurposed as a robotics and Latin classroom. Robotics has never had an official classroom or work space at Hockaday, so this classroom will give robotics more opportunities to expand on this department. Additionally, this new classroom space will allow Latin classes to have a better space to teach students.

Hockaday students will download the program onto their computers and will join a virtual class that their teacher has set up. Teachers will make assignments either for homework, classwork or testing. The program offers many settings including speaking exercises, listening exercises, videos, conversing with your teacher, conversing with your peers and many similar functions.

“The idea of bringing a virtual Language Lab is to open up the horizon of not being constricted by just a room but being able to give the students another way of presenting material and viewing material,” Suarez said.

The virtual lab will impact students by allowing them to experiment with more types of presenting material and allowing the classes to all have opportunities to use this technology, whereas before it was difficult with just the one classroom.

Before, students in language classes didn’t use the old language very frequently. However, now that the lab is virtual, hopefully it will be used by more students and work more effectively than the classroom did. One student who is interested in the new lab is Molly Clark, a sophomore enrolled in Spanish classes at Hockaday

“I think the new online Language Lab will help foreign language students be able to talk and communicate with our class in more ways than we could have before,” Clark said. “The old lab was faulty, and the equipment was outdated, but hopefully with new lab, foreign language students will get a different perspective at the language they are studying through the different settings.”

ReLANpro also offers a setting for teachers to see their student’s progress and make sure that they are on task. This is another of the many settings that improves the effectiveness of the virtual lab.

Teacher and students from the Upper School and Middle School are excited for the new lab to be implemented in foreign language classes because it will provide many new learning opportunities the foreign languages could not offer with the old lab.

“I am very excited about the virtual Language Lab. Now that the switch has been made and it is now virtual, I think what the program offers is amazing,” Suarez said.