Leading the Way to a Better Education 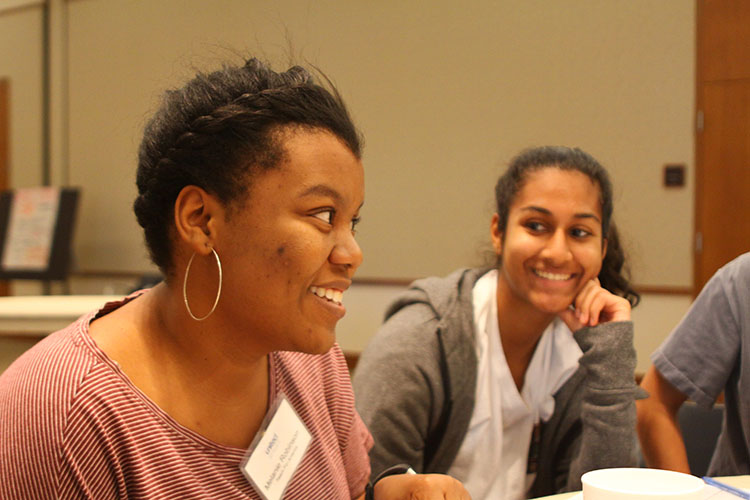 //PICTURED ABOVE: Melanie Robertson, an Associate of Institutional Giving at Teach for America, speaks to students, including junior Varsha Danda, about the Opportunity Gap in education at a meeting for United to Lead. The other topics discussed were Teacher Recruitment and Retention, Literacy, Social Emotional Learning and Early Childhood education.

Over the course of six Saturdays, Hockaday students participating in the United to Lead Program learn about education in the Dallas Independent School District and work with their teams to find a solution to a problem in the DISD system.

On Dec. 1, the students broke into groups to develop a solution to address a problem concerning education in the Dallas Independent School District. Each group will choose a different problem to solve and present their solution on March 23. One winning team will be selected and given money to implement their idea.

The United to Lead Program was founded by Laura Day, Director of The William B. Dean Service Learning Program and the Executive Director of Hockaday’s Institute for Social Impact. The program aims to bring public and private high school students in the Dallas area together to establish connections and to solve educational problems in Dallas.

“It’s everyone’s responsibility to educate everyone,” Day said. “Just because we have a great education here, we shouldn’t rest.”

Junior Gina Miele participates in the United to Lead program and has enjoyed the opportunities that it has provided her with.

“My favorite thing is interacting with the students from public schools. Hockaday is a couple blocks away from a school like W.T. White, but I never get to interact with those kids, even though we’re in the same grade, we’re the same age and we live in the same city,” Miele said.

While some students meet on Saturday, senior Parker Hawk meets with students once a month during a class period of U.S. Government. Day is piloting United to Lead in one government class, which allows students to get involved without spending extra time on the weekend.

“Part of government is to be civically engaged and involved,” Day said.

The class meets with another government class at Jesuit and an advanced placement United States History class at W.T. White High School to brainstorm solutions that address a problem in DISD schools. The three classes will then go through the same design and pitching process as the students that participate on the weekends.

“I feel like a lot of times you think of these things but they never get implemented,” Hawk said. “I know that ultimately, we’re going to make an impact.”

All the students have taken time to learn about the current issues faced by DISD. Day wrote the curriculum and brought in experts from all over the city to provide insight on the problems in education. Students were also given books with additional data and information about who is affected these issues.

On Nov. 3, the students met at Tom C. Gooch Elementary for a “trial run.” They were tasked with solving a problem: Gooch didn’t have enough staff to monitor the kids during both lunch and recess. Either the kids had to skip recess, or they had to go outside unmonitored.

The United to Lead participants brainstormed using design thinking, which allowed the students to get accustomed this process. They shared their solutions with Gooch’s community liaison and vice principal, who then communicated them to the teachers.

Design thinking, a solution-based method that was first introduced at Stanford University, centers around developing a comprehensive understanding of the problem in order to solve it.

“You really put yourself in the person’s shoes, understand what’s happening and out of that you get a solution,” Day explained.

Once the students fully grasped the problems with education and experienced the “trial run” at Gooch, they formed groups according to the problem they would like to address.

The groups will work together until March, when they finally pitch their solutions to DISD board members and other Dallas community members.

One winning team will receive money to implement their idea, and anyone from the other groups who would like to help them will be able join their team.

While they haven’t reached the grand finale of their project, the students have already learned from their experience.

“I didn’t know how many issues they were dealing with in the Dallas school system,” Hawk said. She hopes to address the socioeconomic barrier that is hampering certain students from reaching their full potential.

Similarly, Miele would like to deal with the “zip code lottery”—the idea that a child’s future and socioeconomic status are determined by where they are born. Ultimately for Miele, the greatest satisfaction that comes out of participating in the program is her new friendships with students from other schools.

“Sometimes it’s very easy to stay inside the Hockaday bubble and not really branch out, but this program has allowed me to do that,” Miele said.