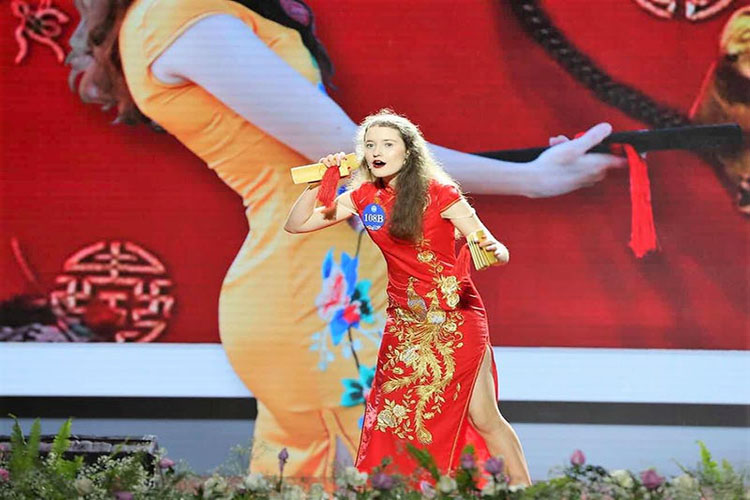 //PICTURED ABOVE: In the first round of the “Chinese Bridge” Competition, junior Charlene Brzesowsky exhibited her talent by participating in rigorous contests. She performed a “Kuaiban,” which is a performance of oral storytelling that incorporates rhythmic talk with bamboo clappers.

The competition is hosted in Beijing by the Confucius Institute Headquarters and Hanban, organizations aiming to promote Chinese language and culture, support local Chinese teaching internationally and facilitate cultural exchanges. Since 2002, the competition has sought out students from across the world in an attempt to strengthen the global understanding of both the Chinese language and culture.

“The competition was very intense, especially the longer one was in it,” Brzesowsky said. “The more rounds we passed, the more intense it was. During the day, we went around and visited different tourist sites, but we had to spend the nights preparing for the next day of the competition.”

While the program aims to unite the young people of China with those from other countries, the competitors endure several preliminary rounds that ensure the most qualified students are selected to represent each country.

These preliminary contests, held in over 50 countries by the Confucius Institute, select and recommend winners to attend the final competition. In April of 2018, Brzesowsky excelled in the Chinese Bridge’s early stages at the University of Texas at Dallas. This enabled her to qualify for the final round of the competition, held in China in October. However, her accomplishments were backed by months of preparation and discipline in order for her to cement her role in representing the United States in Beijing.

“The preparation was pretty complex,” Brzesowsky said. “Besides preparing for the language part of the competition, I also had to learn as much general knowledge about China as I could because they could test us about anything.”

After students like Brzesowsky qualify for Beijing’s final stage of the Chinese Bridge competition, they are met with three rigorous rounds requiring a mastery of the Chinese language and culture. The first round consisted of a knowledge test on the computer, a talent show and a dialogue with another contestant. Those who moved on would be tasked with an abundance of grammar tests, word games, charades and Chinese character writing, all in the format of a game show. Finally, the three teams that qualify for the final round are faced with another modified talent show in which the contestants answer questions about the history and culture of China and prepare a two-minute speech focusing on the Chinese Bridge’s 2018 theme: “Learn Chinese, make friends from all around the world.”

The competition, filmed and broadcasted on Chinese networks, is a prestigious and rewarding opportunity for gifted students. Brzesowsky, who discovered the program through working with various Chinese language organizations, was met with the burden of missing school for two weeks in the midst of her junior year—inducing an indescribable amount of make-up work. However, she saw the chance to visit China for these two weeks as too great of an opportunity to pass up.

“Anyone that is deeply involved in learning Chinese knows about the Chinese Bridge competition, since it’s the ultimate Chinese competition on an international level,” Brzesowsky said. “Even though I missed so much school, it was an unforgettable experience to be able to visit different tourist sites and encounter China firsthand.”

Upper School Mandarin Chinese teacher Esther Bao, who observed her participation in the prestigious competition, praises her student’s dedication to not only excelling in the competition but also her commitment to mastering the difficult language.

“I have to credit Charlene for all of her hard work,” Bao said. “I really only helped her correct her tones and grammar at first, but mainly she spent the time on her own to really master the language. Her passion amazes me every day. She realized she had a love for the language and began to take extra steps to immerse herself into the culture.”

Although the competition helped to further this passion, Brzesowsky quickly picked up the language and has been practicing her tones and immersing herself in the culture for years. While she speaks German, French, Polish and English fluently, the beauty of China’s ancient history and tradition has driven her to commit the majority of her time to Chinese.

“The first time I heard the Chinese language, I was immediately drawn in,” Brzesowsky noted. “It just sounded so different from all the languages around me. Later, when I started finding out more about the rich Chinese culture, I set my eyes on learning Chinese.”

Her love for Chinese transcends Bao’s expectations and surpasses the average person’s journey in learning a language. While many Hockaday students’ end goal is to become fluent or simply confident in speaking a foreign tongue, Brzesowsky has never limited herself to her Chinese homework.

“The extra steps [Brzesowsky] has taken to become a part of the culture is incredible. One example is the initiative she has taken to learn a very difficult instrument, the kuia ‘ban, from a Chinese instructor via Skype. You can imagine the struggle of the time difference. But it’s more than that—she almost knows more about the culture than I do!” Bao jokingly said.

Likewise, her drive to excel does not go unnoticed by her classmates. Junior Ines Guevara, Brzesowsky’s classmate since sixth grade, sees her as a role model. However, while Brzesowsky’s performance has encouraged the Hockaday community to further appreciate the language, the Chinese program is not as popular as French, Spanish or Latin. With such limited exposure within the Hockaday community, Guevara hopes that Brzesowsky’s adventures will be monumental in expanding the appreciation of different cultures.

“[Brzesowsky] is so inspiring to everyone at Hockaday who takes Chinese,” Guevara said. “She helped everyone in the Upper School take notice of the Chinese department and how interesting and important of a language it is.”

With an abundance of newly-earned accolades under her belt, Brzesowsky has established a name for herself in the Chinese both nationally and internationally. However, she acknowledges the unpredictable future in the hopes of continuing to further her talents.

“We never know what the future holds, but ideally, everyone wants to have a job that they’re excited to go to everyday,” Brzesowsky stated. “I am still working on finding something that combines my passions together.”